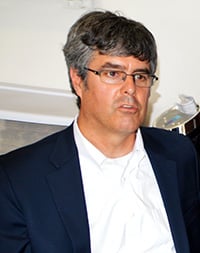 Mason said he spent the morning talking to Lab staff during an all-hands meeting.

“We’re excited to be here. We’ve got a great team pulled together – some people who have long experience and knowledge of Los Alamos and people like myself who are coming in from elsewhere. We have people with experience across the Department of Energy with not just Oak Ridge but Savannah River and Idaho and PNNL, so we’re coming with some fresh ideas and enthusiasm and we want to blend that with the best of what folks are doing here,” he said.

Mason said the associate Lab directors who are part of the core leadership team were introduced to Lab staff earlier in the day.

Mason said he thinks it’s critical for the success of the Lab that there’s a strong connection to the community.

“Community support is essential for what we’re trying to get done. Partly that’s about transparency and trust that you build up over time. Of course, the Lab and the community are in some sense one in the same, but I’ve personally been interested in public education and economic development,” he said, adding that that’s what his volunteer efforts outside the Oak Ridge Lab were focused on. “I was the chair of the Oak Ridge Public Schools Education Foundation and the chair of something called Innovation Alley, which was the regional economic development organization there.

“Those are activities that are very compatible with the Los Alamos Lab. As a research institution, obviously education is important to us because we’re trying to recruit people to come here and we want to know that there are good schools. And economic development is the way we translate the innovation that happens at the Lab into new products, technology and ideas that create employment.

“Those are certainly things that I’m interested in. The three members of this Triad, LLC that we have formed being two state university systems, Texas A&M and the University of California, and Battelle, which is a not for profit, the whole purpose is translating science and technology into products. Those are the kinds of interests that we’re bringing to the community as we assume responsibility for the Lab.”

Mason also addressed the Community Commitment Plan which Triad is required to submit to National Nuclear Security Administration before the end of the transition.

“As part of that, we need to get out and listen. There’s no use in us coming up with a great plan that nobody is interested in, so that’s something we’re starting to think about now and we want to reach across the region and understand where the things are that we can help” he said.

Asked whether he plans to live in Los Alamos, Mason said he and his wife are looking for a home in Los Alamos and also across the region just to understand the possibilities.

“One thing I’ve discovered is it’s actually hard to find a house in Los Alamos right now which I guess is a good thing. The Lab is prospering and has been recruiting a lot, but it has put stress on the housing market,” he said.

With regard to the issue of taxability, Mason said the reason Triad has been cautious is that it turns out the issue is “a little complex”.

“I absolutely don’t want to say something that turns out to be wrong because the worst thing I could do is say yes or no and then everyone reacts one way or the other and then three weeks later we find out – whoops, there’s a problem. So that’s why we’ve been kind of cautious as we do our due diligence to really understand it,” he said.

Mason said the reason it’s a little complicated is that Triad is a non-profit, public service-focused organization.

“That’s not exactly the same as tax exempt. The tax exempt piece is a little bit more complicated because we are a multi-member LLC and we have for profit companies that are subcontractors that are part of our management structure and so forth. Ultimately, it’s determined by New Mexico state law and so at the moment we’re doing our due diligence to understand that. I don’t think it will be too long before we get that clarified and it really is a question of the state law and how it applies to an entity that has our legal structure,” Mason said. “We’re trying to get that sorted out. On the one hand obviously we have a responsibility to the taxpayer and if it turns out that we are eligible then we should take advantage of that but we will pay all the taxes that we owe and that’s the thing we have to figure out, where that falls.”

He said one thing that is important for people to understand is that because so much of Los Alamos’ work is done through subcontractors, the impact of the taxability question is “a little bit smaller than people might think” because even if it turned out that Triad was to be tax exempt, when they subcontract work, that would pick up the gross receipts tax.

“Last year, my understanding is that Los Alamos (National Laboratory) paid approximately $80 million in gross receipts tax, some of which then flowed to the County. That doesn’t go to zero because we rely extensively on small businesses in the area and other entities and they still would pick up the tax. We’re working really hard to get a clear and crisp answer that will be 100 percent right before we announce it. It won’t be real long before we have a decision. We have a four-month transition and come the beginning of November, we’re running the Lab and we have to get it resolved long before that,” Mason said.

He said that during the coming weeks there is a long list of stakeholders that he needs to meet including Los Alamo County, the surrounding communities and pueblos as well as the business community and people interested in education.

He said he will be meeting next week with other stakeholders in Washington, D.C.

“One of the fun parts of transition actually is that learning curve and thinking about who the people are and what motivates them. I’ve got a busy couple of months between now and November,” he said.

Mason’s prior position was  senior vice president for Global Laboratory Operations at Battelle headquarters in Columbus, Ohio where he had responsibility for governance and strategy across the six national laboratories managed or co-managed by Battelle. Prior to that, he worked at Oak Ridge National Laboratory for 19 years, including 10 years as the Laboratory director.