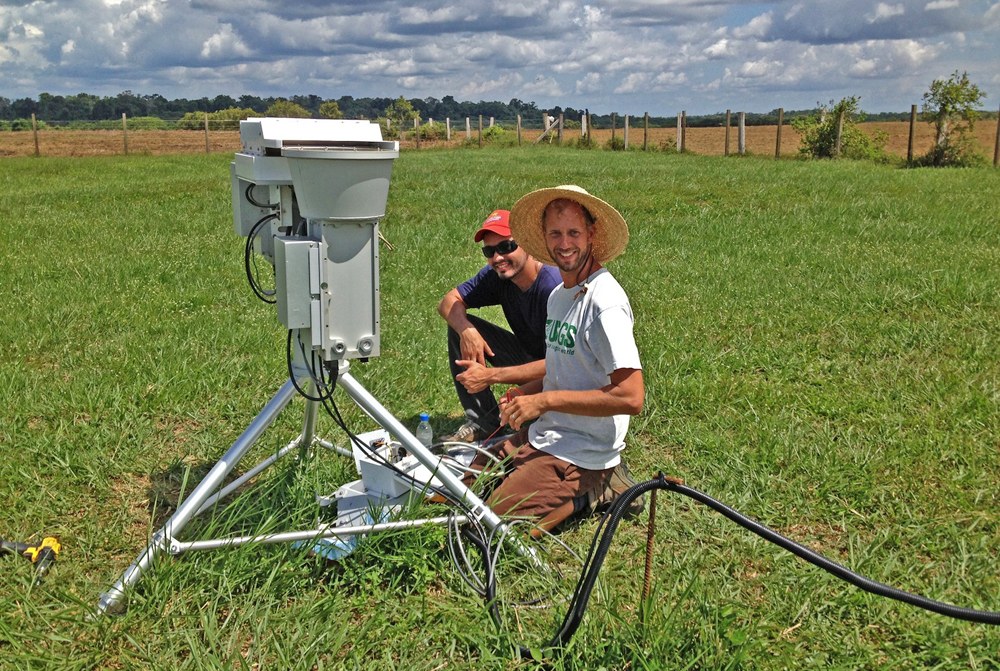 Nearly a quarter of the way through their two-year project, a team of scientists deployed to Brazil’s Amazon Basin is unraveling the mysteries of how land and atmospheric processes affect tropical hydrology and climate. Their work will go far toward improving the climate-prediction computer models on which scientists and policymakers rely for future climate-related planning.

“Our job is to go into climatically undersampled regions where there’s not a lot of data,” said Kim Nitschke, leader of the Los Alamos National Laboratory-based Field Instrument Deployments and Operations (FIDO) team. “Our measurements are aimed at fine-tuning climate modeling, both for more accurate design, and then for verification of conditions at specific locations.”

The experiment, Green Ocean Amazon (GOAmazon), has been underway since January 2014 and nearly 100 collaborators from the US, Germany and Brazil will be studying the rainforest through December 2015. The scientists and their technical assistants have been placing instruments at various sites in Brazil’s Amazon Basin, examining solar radiative energy, atmospheric moisture profiles, and measuring clouds’ and aerosols; microphysical and chemical properties.

“Brazil is an incredibly clean environment for many of these measurements,” said Nitschke, “but we also have measurement sites downwind from a significant city, Manaus, with 2.5 million people, so this gives the researchers an important opportunity to compare a pristine environment with anthropogenically affected conditions.”

FIDO, lead by Nitschke, is a field operations team funded by the DOE Office of Science’s Atmospheric Radiation Measurement (ARM) Program and it led the planning, deployment, and operations coordination for GOAmazon participants, including those sponsored by DOE and by other US and international research agencies. The overarching scientific objectives of the GOAmazon project were awarded by DOE to the principal investigator, Harvard University professor Scot Martin.

In addition, Los Alamos’s Atmospheric Observations Science team, led by senior scientist Manvendra Dubey and working synergistically with FIDO, is deploying instruments both on aircraft and on the ground to measure carbon dioxide (CO2), water, and its isotopologues as well as aerosols at multiple scales. (Isotopologues are molecules that vary from their parent molecule by having at least one atom that has a different number of neutrons.) This is being done in collaboration with the other laboratories and universities on the project.

“Amazon rainforests soak up large amounts of CO2 moderating its atmospheric accumulation from anthropogenic emissions,” Dubey said. “Whether this CO2 buffering will continue in the future, when models show the Amazon is projected to experience more droughts, remains unknown. Our GOAmazon observations will measure in detail how the rainforest carbon cycle responds to changes in water to quantify this feedback.

Among the tools at work from Los Alamos is a new Solar Fourier Transform Spectrometer, designed to measure greenhouse gas concentrations such as carbon dioxide and water vapor over the rainforest at regional scales to understand how it responds to droughts and climate change.

Said Nitschke, “these data are released into the public domain as soon as possible, as our goal is to ensure that scientists around the globe have the opportunity to access it free of charge.” The Los Alamos researchers are supported by the Department of Energy’s Office of Science.