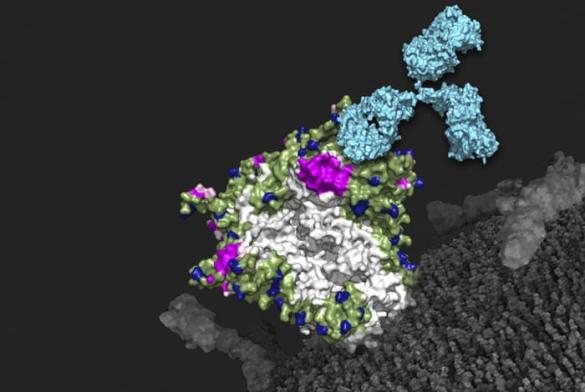 The search for a vaccine against HIV, the virus that causes AIDS, has baffled the scientific community for almost four decades.

Because HIV is so variable that every infected person has a distinct virus evolving in their bodies, a successful vaccine needs to trigger immune responses able to recognize this broad variety of HIV strains. Recent work at Los Alamos National Laboratory sheds light on the mechanisms that lead to broader immune responses in HIV infected individuals and will help inform future vaccine designs.

One of the key weapons the immune system uses to block HIV infections is the antibodies that bind to viral surface proteins, called the envelope. HIV uses these envelope proteins to attach and enter host cells in order to infect them. When an antibody binds to an envelope, it blocks viral entry and thus prevents infection. All HIV infected patients produce antibodies able to recognize the virus evolving inside their body, but some of these patients eventually produce antibodies that actually recognize a much wider range of HIV strains.

These antibodies, called “broadly neutralizing antibodies,” are prime targets for vaccine design as they have the potential to prevent infection from most of the diverse HIV strains circulating in the world. Unfortunately, not all HIV viruses trigger this kind of antibody production. One of the questions researchers have been after is: are there particular characteristics of viruses that produce broadly neutralizing antibodies over the course of the infection?

Researchers at Los Alamos believe that the answer lies in a particular kind of sugar molecules, called glycans, that coat the surface of the HIV envelope proteins. Glycans move across the surface of the envelope protein and create a shield that typically deflects antibodies from recognizing the virus. However, broadly neutralizing antibodies can overcome the glycan shield and still block the virus. The scientists developed a sequence- and structure-based computational strategy that predicts the glycan shield for a given envelope protein sequence. Experiments and computer simulations to visualize this glycan shield have been difficult to create, so it is significant that the team has succeeded in developing such a model, which is now described in the Oct. 23 issue of the journal Cell Reports.

The Los Alamos team found that global strains of HIV have mostly intact glycan shields, while a few have holes in the coating. They showed that this variability is significant because antibodies found in naturally infected patients who have been followed over several years exhibited different patterns depending on the differences found in the glycan shields of the infecting viruses: patients infected with viruses with the more intact HIV glycan coatings over time developed more effective, broadly neutralizing antibodies. Subjects with the patchier glycan shields did not: their antibodies seemed drawn to the holes in the virus shield and did not recognize other HIV strains well.

“Our work suggests that working toward HIV vaccines with intact glycan shields might be beneficial for inducing the desired cross-reactive (broadly neutralizing) antibody responses, and we are currently using our computational strategy to rationally design such vaccines,” said the study’s lead author, Kshitij Wagh. Additional testing with collaborators at the University of Pennsylvania and Duke University is underway.

At Los Alamos National Laboratory, theory and computational work was performed by Kshitij Wagh, Elena Giorgi, Peter Hraber and led by Bette Korber. This work was done in close collaboration with the laboratory of Dr. Beatrice Hahn at the University of Pennsylvania, and the work was funded through an NIH grant for HIV vaccine research headed by Dr. Barton Haynes at Duke University (CHAVI-ID).