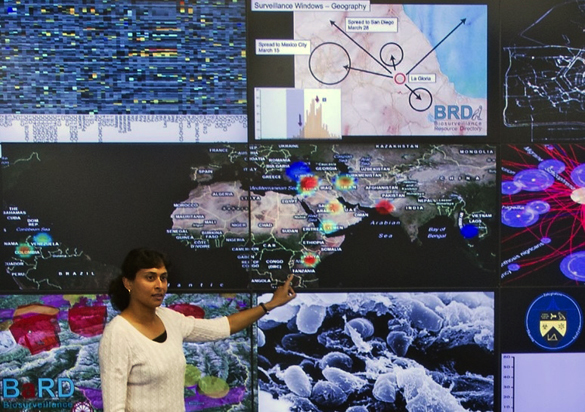 What’s the latest on chikungunya?

Don’t know? Never heard of it?

Don’t feel bad. Not many people outside the health profession have encountered this disturbing, infectious disease that has hit parts of southwestern Mexico very hard this month.

So try this: Go to swap.lanl.gov where there is an option box labelled “Select a Disease.” Click on the down arrow to open the box and – what do you know? The first disease on the list is “chikungunya.” Click it and a fact sheet appears that can bring you up to speed.

The window is part of Los Alamos National Laboratory’s biosurveillance gateway, a web portal still in development that brings together a large and expanding body of specialized information designed to provide the global health and science community with a useful set of tools.

Chikungunya, one may learn, is a mosquito-borne illness, like dengue fever, communicated from human to human by way of an infected female mosquito bite. It is said to be most painful for the first three to eight days and there are no known viruses or treatments other than rest. Also of concern is chikungunya’s tendency to infect travelers who can then carry the virus home into a situation where it is unexpected and can spark a new patch of illness.

Not everybody needs to know about chikungunya, but many people with public health responsibilities do need to know about potential threats that are within striking distance.  As health professionals and bystanders discover each time an infectious disease breaks out, whether it’s an old disease with a new genetic strategy or a new one exploiting a disrupted environment, there is no time to waste on inadequate information.

Alina Deshpande, a native of India, who has a doctorate in biomedical sciences and works in the area of clinical diagnostics, has led the effort to create the lab’s biosurveillance portal on the Web. “Biosurveillance has been around forever,” she said in a telephone interview this week. Ancient medicine men had their ears to the ground and public health officials are on the alert around the clock. “There’s nothing new about the concept.”

But LANL’s biosurveillance capabilities have typically developed in different parts of the lab and they weren’t always publicly available, tailored to this purpose, or accessible as an evolving package. When biological weapons were a major national concern, LANL developed expertise in forensic investigations of select agents like anthrax. Deshpande said international incidents like the cholera crisis in Haiti and the H1N1 influenza epidemic in Mexico contributed to the need to strengthen early efforts in biosurveillance. Additional LANL tools that added unique resources included sequence databases for HIV, hepatitis C and viral hemorrhagic fevers, like Ebola.

Applications for tracking current outbreaks and comparing them with rate of growth and other factors from historic databases enabled a focused context to illuminate the question at hand. Further links to technical documents, research papers and background studies from the Centers for Disease Control and Prevention or the National Institutes of Health, for example, point to information that could be immediately useful for a decision-maker.

Deshpande demonstrated the way the SWAP program led the user through a selection process to pick a historic case that resembled as much as possible an infectious disease issue in progress.  She selected measles as the disease and characterized the epidemic as of a certain size and in certain physical environment with a choice of other characteristics. When the program crunched the information, it was able to show by a little pink overlay of a timeline graph, that the new case was only in the early stages.

“If you started a vaccination campaign, this is how you might reduce the danger, given the situation and the area,” Deshpande said, “History will often repeat itself, especially large outbreaks, and we know if you don’t use [vaccinations] things pop back up again.”

Deshpande said her research was “in the area of developing decision support tools for infectious disease surveillance,” which sums up LANL’s new gateway website, itself an elaborate research effort made up of many other elaborate research efforts. She was a coauthor of a PLOS ONE paper in January 2004, “Advancing a Framework to Enable Characterization and Evaluation of Data Streams Useful for Biosurveillance,” the blueprint for this global asset that is becoming more and more visible today.