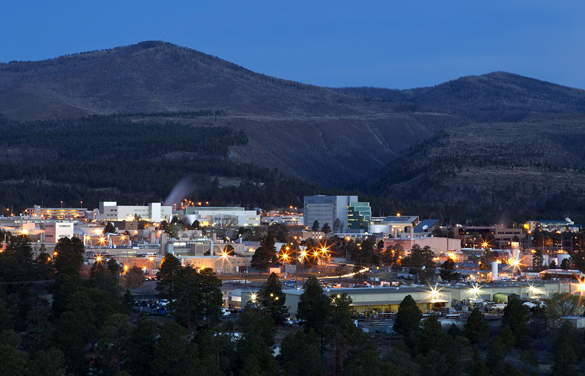 The Los Alamos National Laboratory complex at dawn with a backdrop of the Jemez Mountain range. Courtesy/LANS

While improvement arrives too late to make up for inadequate performance evaluations of the last two years, the National Nuclear Security Administration scored Los Alamos National Laboratory higher on the whole this year, with six out of six ratings of “good” or better.

The lowest marks came in the highest weighted category, which was operations and infrastructure. The previous year’s low-mark of 49 (out of 100) percent in operations and infrastructure was attributed largely to problems growing out of the laboratory’s responsibilities for a radiation leak at the Waste Isolation Pilot Plant in Southern New Mexico and to a lengthy cessation of activities in the laboratory’s signature plutonium facility.

Last year’s unsatisfactory score effectively triggered the end of the management contract, which was then supposed to be opened to a new competition this year. But a one-year extension was negotiated between Los Alamos National Security, LLC, the partnership that manages the current contract, and the NNSA, which oversees the contractor for the Department of Energy. The agreed-upon extension added one more year, so the contract will now expire at the end of September 2018.

Laboratory leadership, which was given a 60 percent rating for FY2015, earned a “very good” rating and 84 percent of the award fee available for this goal for FY2016. The laboratory leadership team was credited with having “addressed the forthcoming re-competition of the laboratory contract to the ongoing workforce in a constructive, calming manner,” and for outreach and communications efforts to employees and stakeholders that helped to build “a unity of purpose and a unity of effort.”

LANL Director Charles McMillan referred to that spirit in an internal memorandum to employees. “Together we accomplished numerous achievements this past year,” he wrote, citing achievements that included a restart of the Los Alamos Plutonium Facility, work on Life Extension Programs for two nuclear warheads, progress on the lab’s new project known as MaRIE (Matter and Radiation in Extremes), along with advances in exascalecomputing (a billion calculations a second) and “numerous important contributions to our nuclear nonproliferation mission…” among other examples.

Along with heartfelt thanks, McMillan added, “Your contributions to integrating scientific excellence and operational effectiveness have strengthened the Laboratory and produced these successes.”

The laboratory’s excellent ratings came in the categories related to its nuclear weapons mission, as well as the partnership role it plays within the nuclear weapons complex as a whole and also for its contributions in science, technology and engineering.

In the weapons mission, the report acknowledged the laboratory’s success in achieving “readiness” at the plutonium facility. “Readiness” is a technical term that covers a vast checklist of corrective actions and pre-conditions that had to be met in order to resume production after a long period of inactivity. In addition, the report emphasizes, “the successful assembly of a production development pit in August, which exercised all plutonium operations following completion of readiness and restart activities.” Called a “Phoenix Build,”this new nuclear trigger “puts the laboratory on track to produce two development units in FY 2017,” according to the report.

As a strategic partner, the laboratory was measured according to its success in executing “high impact work for the DOE,” and its associated interests and collaborations. “The laboratory exceeded expectations,” the evaluation said.

LANL’s science, technology and engineering were given high marks for a number of achievements that could be described with metrics. For example:

In every category, there were inevitably issues, new and residual shortcomings, signs of deeper, systemic dysfunction; safety and security incidents and negative trends that could be glimpsed during the year.

“The Laboratory’s Environmental Safety and Health policies and processes are satisfactory and are routinely updated based of experience and lessons learned,” the performance evaluation observes. “However, the desired compliance by workers at alllevels remains elusive, as demonstrated by several higher profile occurrences that were the result of less than adequate observance of the requirements,” the authors add.

Concerned by the laboratory’s plans to resume plutonium pit production, Jay Coghlan, executive director of Nuclear Watch New Mexico, called special attention to the report’s cautionary language about “criticality safety,” in the nuclear facility, which has been the reason for much of the work there. Coghlan explains that criticality safety has to do with analysis of the probabilities for an uncontrolled nuclear chain reaction caused by unexpected events and unintentional aggregation of nuclear materials, which has been a recurring issue at the plutonium facility.

“Leadership in operations management has not prioritized needed criticality safety activities and improvement adequately,” the report states. “There is a notable lack of improvement in procedural and operational implementation of the program areas not directly engaged in resumption activities. The number and latency of infractions in the plutonium facility is of concern.”

“The lab has had a long history of inadequate safety analyses and unacceptable nuclear criticality risks,” Coghlan said.