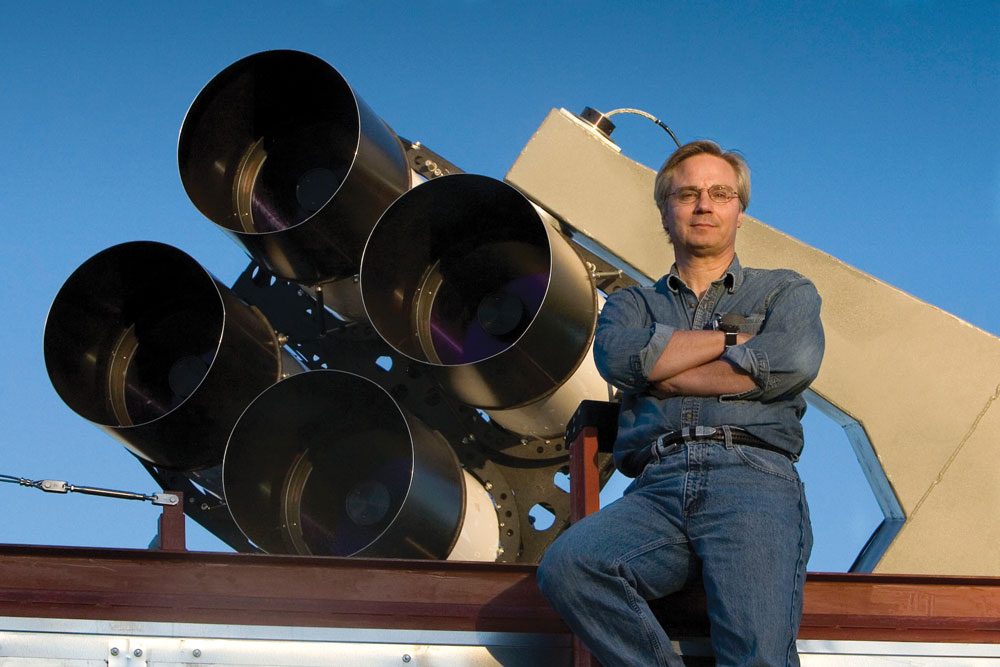 LANL astrophysicist Tom Vestrand poses with a telescope array that is part of the RAPTOR (RAPid Telescopes for Optical Response) system. RAPTOR is an intelligent visual system that scans the skies for optical anomalies and zeroes in on them when it detects them. This unique capability allowed the system to witness the rare birth of a black hole in the constellation Leo recently. Courtesy/LANL

“This was the burst of the century,” said Los Alamos co-author James Wren. “It’s the biggest, brightest one to happen in at least 20 years, and maybe even longer than that.”

The RAPTOR (RAPid Telescopes for Optical Response) system is a network of small robotic observatories that scan the skies for optical anomalies such as flashes emanating from a star in its death throes as it collapses and becomes a black hole—an object so dense that not even light can escape its gravity field. This birth announcement arrived from the constellation Leo in the form of an exceptionally bright flash of visible light that accompanied a powerful burst of cosmic gamma-ray emissions.

What made such an extremely rare event even more spectacular for scientists, however, is that, in addition to the RAPTOR sighting, it was witnessed by an armada of instruments—including gamma-ray and X-ray detectors aboard NASA’s Fermi, NuSTAR and Swift satellites. While the NASA instruments recorded some of the highest-energy gamma-ray bursts ever measured from such an event, RAPTOR noticed that the massive and violent transformation of a star into a black hole yielded a lingering “afterglow” that faded in lock-step with the highest energy gamma-rays.

“This afterglow is interesting to see,” said paper co-author Przemek Wozniak of Los Alamos’s Intelligence and Space Research Division. “We normally see a flash associated with the beginning of an event, analogous to the bright flash that you would see coinciding with the explosion of a firecracker. This afterglow may be somewhat analogous to the embers that you might be able to see lingering after your firecracker has exploded. It is the link between the optical phenomenon and the gamma-rays that we haven’t seen before, and that’s what makes this display extremely exciting.”

All things considered, the event was among the brightest and most energetic of its type ever witnessed.

“This was a Rosetta-Stone event that illuminates so many things—literally,” Vestrand said. “We were very fortunate to have all of the NASA and ground-based instruments seeing it at the same time. We had all the assets in place to collect a very detailed data set. These are data that astrophysicists will be looking at for a long time to come because we have a detailed record of the event as it unfolded.”

Already the event, labeled GRB 130427A by astrophysicists, is testing some long-held assumptions about the nature of the universe. For example, scientists recorded energy levels for gamma rays that are higher than what some researchers thought theoretically possible. This revelation may require physicists to modify existing theories about radiation. No doubt, the data set could yield more surprises in the future, Vestrand said.

In addition to Vestrand, Wren and Wozniak, Los Alamos National Laboratory researchers associated with the paper include: Alin-Daniel Panaitescu, Heath Davis and David Palmer of the Intelligence and Space Research Division.

Other organizations affiliated with the research include Stanford University, the University of Alabama, Las Cumbres Observatory Global Telescope Network and the Universities Space Research Association.

Los Alamos funding for the research was made possible by the Laboratory’s Directed-Research and Development Program, which invests in high-risk and potentially high-payoff projects that help Los Alamos anticipate and prepare for emerging national security challenges.