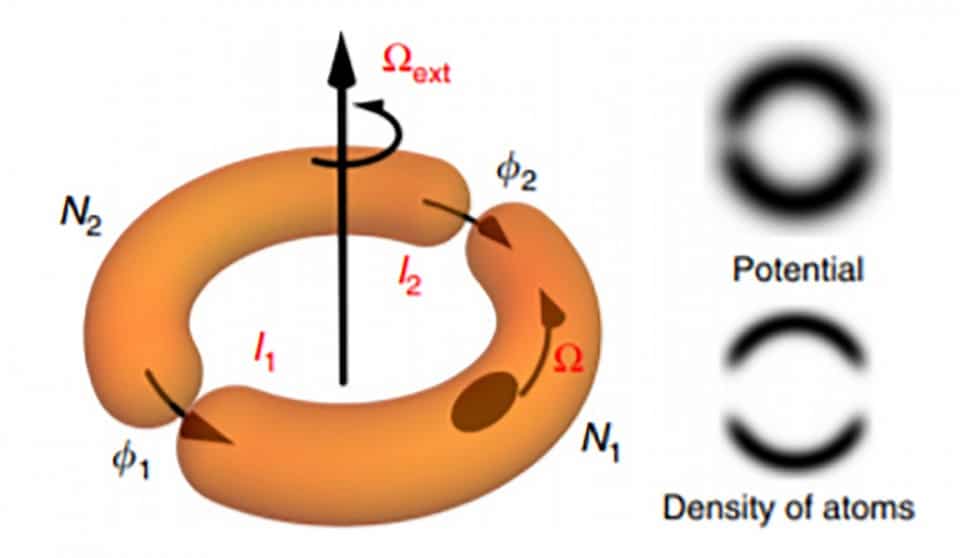 A schematic of an atomtronic SQUID shows semicircular traps that separate clouds of atoms, which quantum mechanically interfere when the device is rotated. Courtesy/LANL

A new device that relies on flowing clouds of ultracold atoms promises potential tests of the intersection between the weirdness of the quantum world and the familiarity of the macroscopic world experienced every day.

The atomtronic Superconducting QUantum Interference Device (SQUID) also is potentially useful for ultrasensitive rotation measurements and as a component in quantum computers.

“In a conventional SQUID, the quantum interference in electron currents can be used to make one of the most sensitive magnetic field detectors,” said Changhyun Ryu, a physicist with the Material Physics and Applications Quantum group at Los Alamos National Laboratory. “We use neutral atoms rather than charged electrons. Instead of responding to magnetic fields, the atomtronic version of a SQUID is sensitive to mechanical rotation.”

Although small, at only about ten millionths of a meter across, the atomtronic SQUID is thousands of times larger than the molecules and atoms that are typically governed by the laws of quantum mechanics. The relatively large scale of the device lets it test theories of macroscopic realism, which could help explain how the world we are familiar with is compatible with the quantum weirdness that rules the universe on very small scales.

The researchers created the device by trapping cold atoms in a sheet of laser light. A second laser intersecting the sheet “painted” patterns that guided the atoms into two semicircles separated by small gaps known as Josephson Junctions.

As the first prototype atomtronic SQUID, the device has a long way to go before it can lead to new guidance systems or insights into the connection between the quantum and classical worlds. The researchers expect that scaling the device up to produce larger diameter atomtronic SQUIDs could open the door to practical applications and new quantum mechanical insights.