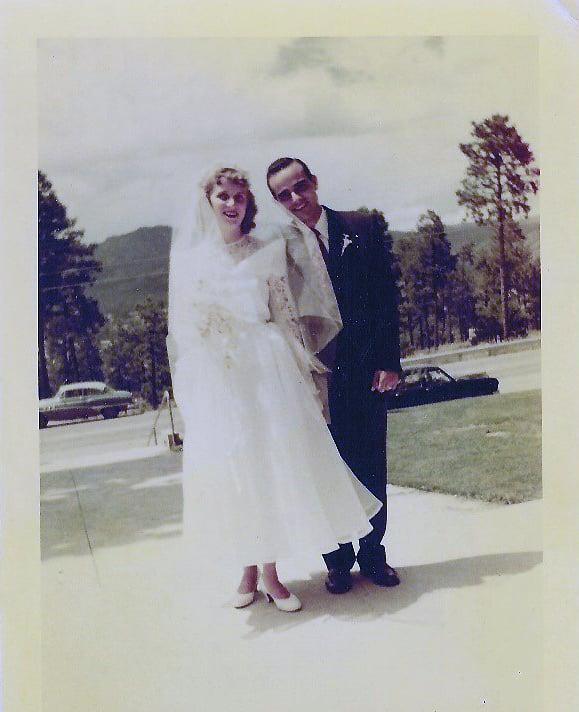 Mo and Elaine Alei on their wedding day in October 1953 outside The United Church on the corner of Canyon Road and 15th Street in Los Alamos. Courtesy photo 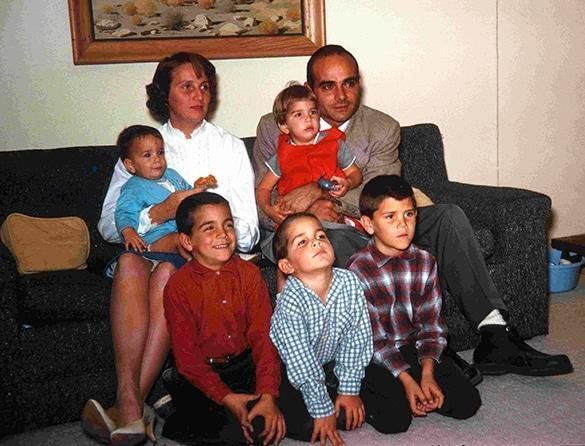 Mo and Elaine Alei and their five children in 1963. Courtesy photo
By Lauren Griffith
Los Alamos
Learning From The Best … Mohammed And Elaine Alei

There have been so many moments in my life where I have been struck by the reminder that my grandparents are remarkable people. At the ages of 92 and 88, they live in their own home in Albuquerque and are still completely self-sufficient, attending exercise classes weekly, driving, traveling, golfing and singing in local choirs.

They remain deeply involved in the lives of their direct descendants (five children and their spouses, 11 grandchildren, three of whom also have spouses and  four great-grandchildren) all of whom are very close and gather together on a regular basis.

To say that our family is unique is an understatement and it all started with these two incredible people. As I began to talk to them both about their time in Los Alamos and at our laboratory, I discovered (unsurprisingly) that they were not only significantly influential in the lives of their families, but also in their work here at LANL.

My grandfather, Mohammed Alei (or Mo, as he is affectionately known by friends and family) joined Los Alamos Scientific Laboratory (as it was known in the 1950s) in 1951. My grandmother, Elaine Felix Alei, joined in November, 1952 and met Mo one week later at a folk dance held at Fuller Lodge. One year later, they were married at The United Church on the corner of Canyon Road and 15th Street.

Mo was born April 29, 1926 in Detroit, Mich., to an illiterate Palestinian father and Portuguese mother who was fluent in seven languages. Mo’s parents instilled in him an incredible work ethic and desire to learn.  Mo grew up in Hawaii but spent his last years of high school in Sacramento, Calif. On graduating high school, he moved to Berkley where he obtained his bachelor’s degree in chemical engineering. On the recommendation of his professor, he moved to Princeton where he obtained his PhD in physical chemistry under the mentorship of Sir Hugh Stott Taylor. Sir Hugh was the first person to create pure, radioactive heavy water used in the WWII atomic bombs, and was hugely influential in Mo’s understanding of physical chemistry.

On graduating from Princeton, Mo had a number of job offers, including Dupont in Chicago, IL and Allied Chemical and Dye in Philadelphia, Penn. On the recommendation of a professor, Walter Kauzmann, Mo accepted an offer to visit Los Alamos and fell in love with the beauty of the place. Even though he was offered more money elsewhere, he valued and respected the focus of Director Noris Bradbury, who was committed to doing “good science”, publishing open literature and overcoming scientific challenges related to nuclear weaponry. He also loved the atmosphere of the town where the average age was 28 and the entertainment was not passive. Numerous activities and clubs were available, including archery, fishing, mountain climbing, basketball and tennis.

So in 1951, Mo joined the Chemistry and Metallurgy Research (CMR) Division of the laboratory, in a small building on the edge Ashley Pond under Group Leader Joe Fred Lemons. One of the most memorable moments for him was witnessing a nuclear explosion in the atmosphere in Nevada shortly after he arrived. The first challenge Mo was tasked with was finding a solution to the issue of plutonium reacting with hydrogen and disintegrating to a brown powder (plutonium hydride) in the nuclear weapons that were stockpiled here. Left over time, the plutonium would become useless. Using the “active centers” concept that Sir Hugh Stott Taylor had developed and through testing and watching reactions, Mo discovered that adding hydrochloric gas to the hydrogen stopped the reaction process and preserved the plutonium. He documented all of his findings in a report, which he submitted to his superiors. About a year later, he had questions about the work he had done and tried to get a copy of report. He was told however, that the report was Top Secret and he was only cleared for Secret, so he was not allowed to look at it, even though he wrote it!

Mo moved from work on weapons to chemical studies using Nuclear Magnetic Resonance (NMR) and worked on numerous projects and experiments, including one for the military that developed tracers using methane and carbon-13 to learn about the transport of gaseous material in the southern hemisphere. This took Mo to Australia, New Zealand and Antarctica and required collaboration with 14 other countries, including Japan, Britain, France, Australia and New Zealand. Mo retired in 1988, having been at the laboratory for 37 years.

Elaine Felix (now Alei) was born March 21, 1930 in Cleveland, Ohio to an electrician and a nurse. She moved with her family to Galveston, Texas at the age of 12 and finished school on the gulf coast. She attended Texas Tech University where she obtained her bachelor’s degree in math. During the last year of college, a woman from Los Alamos named Marge Devaney came to Texas Tech looking for senior math majors who would be interested in working on the Mathematical Analyzer, Numerical Integrator, and Computer (MANIAC) at the laboratory. She heard about Elaine and approached her in her dorm room to ask if she’d be interested in working at the lab. Elaine attended an interview and was offered a position. She too loved the scenery and atmosphere of the town, so in November 1952 joined Los Alamos Scientific Laboratory.

On arrival at the laboratory, Elaine began work in T-7, Theoretical Division under Nicholas Metropolis on MANIAC, programming data and writing sub-routines. Nothing had been written on the computer and had to be developed from scratch. All of the senior math majors had to book time in the machine room to work on the machine and Elaine used to regularly go in at 2 a.m. to work so she could get undisturbed time on the machine.

Elaine had numerous one on one sessions with Metropolis and the famous Enrico Fermi on how to use the computer. She described the different teaching techniques, reminiscing that “Nick would be in the middle of explaining something to me and I would have to stop him and say I didn’t understand. Then he’d go way back, almost to the beginning of the process and start over. But Fermi, he would see my face change character and go back to the last step I understood without me even asking and explain in different ways until I understood. He wasn’t interested in talking about himself, he just wanted me to understand and I always did. He was the sweetest little man!”

Elaine would regularly input data into MANIAC and gather output data and results for Fermi and Metropolis, who then used the data to gather information and publish reports. As a result, Elaine’s name can be found on many of the Metropolis and Fermi’s publications, which she still has copies of today.

Elaine left the laboratory toward the end of her first pregnancy in 1954 in order to raise her children, of which she had five. Twenty four years later, she rejoined LANL in 1978 part-time, again working with computers where she learned how to program using the American Standard Code for Information Interchange (ASCII) method and programmed 16-bit minicomputers called PDP-11s. She worked for another 10 years until 1988 when she retired with Mo. 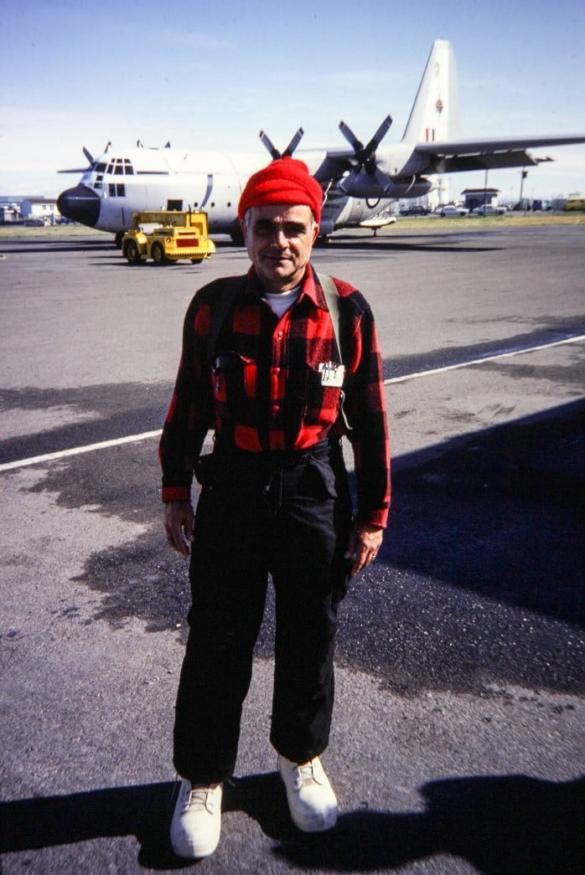 Mo Alei prior to taking off for a trip to Antarctica. Courtesy photo 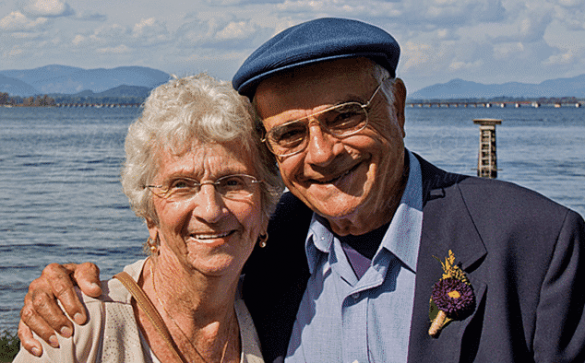 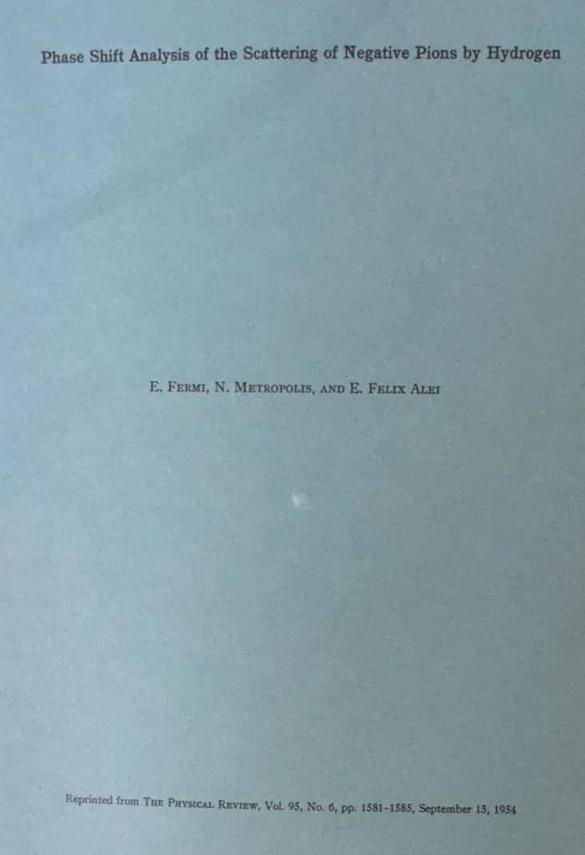 The name of Elaine Felix Alei is found on many of the publications by Enrico Fermi and Nicholas Metropolis. Courtesy photo