LANB Gets Behind Firefighters Local 3279 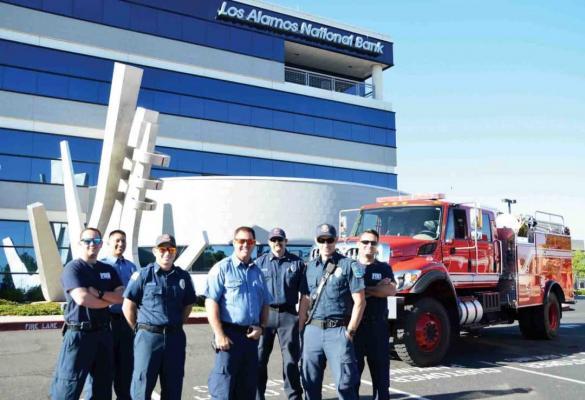 Driver/Engineer Colorado Cordova of the Los Alamos Fire Department coordinates the annual IAFF Local 3279 Firefighter Recognition Dinner with assistance from Fire Capt. Jeff Saiz and eight other firefighters. The dinner provides an opportunity to thank the firefighters for their dedication throughout the year.

“This event was greatly enhanced when Los Alamos National Bank became our major donor in 2016,” Cordova said. “We really couldn’t do this for our firefighters in nearly as nice a way without all their support.”

Union President Bert Quintana has been with the local fire department for more than 12 years and has served as head of the 120-member firefighters union for about the last six years. He commended the bank for getting behind the local firefighters.

“We thank LANB for helping our community and for supporting our firefighters and acknowledging the work that they,” he said.

“Chief Hughes has been a great supporter and he shows up whenever we recognize our firefighters,” Quintana said.

Chief Hughes shared his appreciation for the bank’s support.

“Our firefighters do a tremendous job and this dinner allows us to recognize them in a very special way,” Chief Hughes said. “The bank’s support really means a lot to all of us.”

LANB Los Alamos Market President Liddie Martinez spoke about the importance that the bank places on supporting the firefighters.

“LANB is proud to support our Local 3279,” Martinez said. “These men and women do not care what kind of car we drive, what our last names are, how much money we have in our bank account, who we know or who we are related to – when we are in danger – they save our lives. They can count on us as we count on them every day.”

LAFD is the third largest career fire department in the state of New Mexico. The department provides a multi-disciplined, multi-dimensional mission of fire, rescue, emergency medical, public education and life safety services to the citizens and visitors of Los Alamos County.

Included in the services LAFD provides are the protection of the Los Alamos National Laboratory (LANL), a large nuclear research and development complex; protection of the communities of Los Alamos and White Rock; and assistance in the provision of emergency response for an extensive urban wildland interface. LAFD was organized under the Manhattan Project in April 1943.

At that time, it consisted of seven civilian firefighters and 25 volunteer firefighters. In September 1943, the firefighter functions were taken over by the military. The Fire Department was governed by the US Atomic Energy Commission and the US Department of Energy until the County took it over in September 1989. Today, LAFD operates six fire stations with 150 budgeted positions,130 shift firefighters including three shift battalion chiefs, nine chief and staff officers assigned to day shifts and 13 civilian support staff.