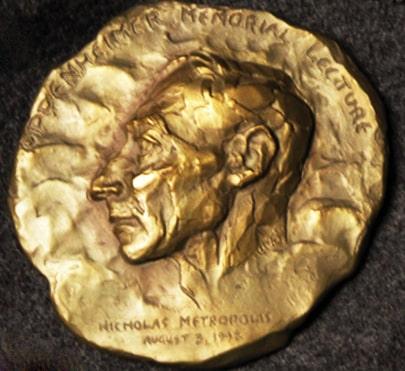 Pugmire told the Los Alamos Daily Post Tuesday that for three decades the J. Robert Oppenheimer Committee has welcomed the financial support of LANB in funding scholarships for outstanding high school seniors as they head to college.

“We are proud of the remarkable students that we’ve been able to support as a way to honor the memory of Oppenheimer’s scientific career. The Los Alamos National Bank has been our largest single community donor, beginning in 1984 and awarding more than 40 scholarships adding up to $120,500,” Pugmire said. “Being an ‘Oppenheimer Scholar’ is a tradition that has resulted from a wonderful partnership between the Oppenheimer Committee and LANB – and we are most grateful for the bank’s support.”

LANB began its participation of support for the JROMC in 1994, she said. Through 2017, LANB has funded 30 scholarships for Los Alamos High School students with a total value of $89,000.

“Los Alamos National Bank has sponsored scholarships and been very supportive of the effort of the committee in highlighting the promising youth of Los Alamos and the Region and we thank them,” Izraelevitz said.

LANB Market President Liddie Martinez spoke about the long history the bank shares with the JROMC.

“Los Alamos National Bank is very proud of our longtime support for the important efforts of the J. Robert Oppenheimer Memorial Committee and we look forward to continuing that support in the future,” Martinez said.

JROMC began its scholarship program in 1984 with one scholarship for a Los Alamos High School (LAHS) graduating senior. Awards were made only to LAHS students until 1998 when the first scholarship was granted to a regional high school (Pojoaque Valley High School) student. Awards have subsequently also been directed to students of Santa Fe High School and Capital High School in Santa Fe.

The JROMC is in the process of selecting its Los Alamos and Regional Scholarship winners for 2018 and will announce those winners soon.

Plans are in the works for the 47th Oppenheimer Memorial Lecture, expected to occur sometime between June and early August. Dr. Michael McFaul is set to deliver the lecture. He is a well-known scholar, diplomat, political commentator, and former U.S. ambassador to Russia.

When J. Robert Oppenheimer returned to Los Alamos in 1964 to deliver a memorial address for Niels Bohr, Norris Bradbury – Oppenheimer’s successor as director of the laboratory – introduced him as “Mr. Los Alamos.” The overflow audience resoundingly cheered, welcoming Oppenheimer with unrestrained affection and respect. In failing health, Oppenheimer was never to return to Los Alamos and died in 1967.

In May 1968, John Brolley attended the 25th anniversary celebration of the first chain reaction at the University of Chicago where John had initially worked as a graduate student during World War II. He was quite taken with the Henry Moore sculpture that had been erected next to the West Stands.

On the flight home he began thinking about Lewis Strauss, Edward Teller and the infamous 1964 Oppenheimer security hearings. They “were conducting a vendetta against a fine man. And what does one do about this now?” By the time his plane had landed, he knew what he wanted to do.

He went to the Los Alamos Arts Council and suggested that a statue of Oppenheimer be acquired for the community. From this, a separate committee was formed, the J. Robert Oppenheimer Memorial Committee (JROMC). That was how, in Brolley’s words, it “nucleated”.

Others on the committee in the early years certainly played important roles in the effort. But upon learning of Brolley’s death, Nerses Krikorian or “Krik” stated, “He was the true initiator of the JROMC, a worthwhile contribution to the historical sense of Los Alamos.”

Today the Committee consists of up to 25 members all dedicated to furthering the memory and spirit of J. Robert Oppenheimer.

The JROMC was officially incorporated by the state in November 1971 as a non-profit, 501(c)3 organization. The annual memorial lecture and the scholarship program are primarily funded through endowments and individual contributions, in addition to LANB’s support. Anyone interested in supporting the JROMC scholarship program, may send contributions to: JROMC, P.O. Box 220, Los Alamos, NM 87544.