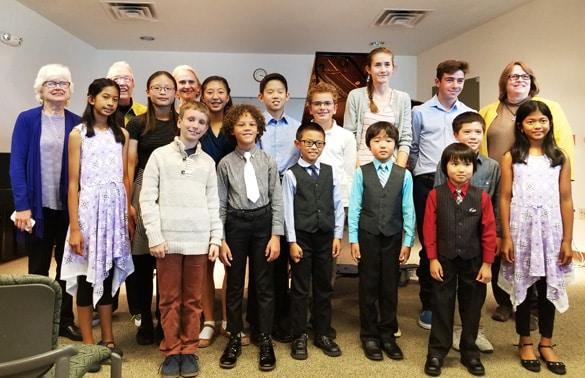 In keeping with their ongoing mission of Community Outreach and Service, the UNM-LA Campus will host the first of two Spring Piano Recitals at 2 p.m. Sunday, Feb. 25.

The recital is FREE and open to the public, sponsored by the Los Alamos Music Teachers Association (LAMTA). LAMTA’s Sunday Musicales are regular public presentations for the public’s enjoyment and appreciation of the city’s musically talented youth.

Fifteen students from the age of 8 through 14 will be presenting a program that especially features music of the Classic era, due to many of the young artists having recently competed in the annual Santa Fe Sonata Contest. Other vibrant works from the 20th/21st centuries also will be performed by students competing in the upcoming Dennis Alexander Piano Contest held in March in Albuquerque, many of whom were prize winners in the District Honors Competition last October.

Yunseo Kim, 13, and Daniel Kim, 12, both First Place Winners in the recent Santa Fe Sonata Contest. Respectively, they are both performing Beethoven: Sonata in G, Op. 79 and the Sonata in G minor, Op. 49, No. 1. Also, young bassoonist, Karin Ebey, age 14, will be performing on piano as well as the bassoon. Ebey was selected as this year’s Principal Bassoon in the All-State Orchestra. She will be accompanied by her teacher, Juanita Madland, on Prelude No. 4 of Dimitri Shostakovich and will perform Cesar Franck’s Puppet’s Complaint on the piano.

Other students performing in the Musicale:

LAMTA is the local affiliate of the State (PMTNM) and National (MTNA) professional music organizations for independent music teachers and college music faculty. All performers in Musicales are students of teachers who are professional members of all three organizations.

Students for this recital represent teachers Juanita Madland, Janna Warren, Dr. Madeline Williamson and Dr. Patricia Wood. Although the program is Free to the public, all donations are gladly accepted at the reception, which follows in the Lobby. All donations go to support ongoing enrichment activities conducted on behalf of students by the LAMTA.

LAMTA is a non-profit 501-(c-3) organization with the mission of furthering the art of music teaching and programs that encourage and support music study and appreciation for students and their community. The campus Student Services Building is accessible either by stairs on the Diamond Drive entrance, or, is easily Wheelchair Accessible by parking in the parking lot behind the building.