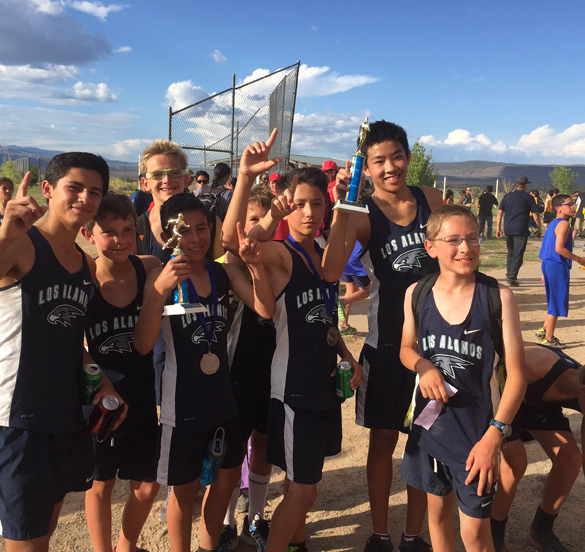 The team arrived focused, prepared and ready to race. The course was a challenging 2 mile loop of rolling dirt terrain, with some very steep hill sections.

Up first, the seventh grade girls were led by Norissa Valdez, who competed in a dominating 1-2 duel with the eventual winner from Albuquerque Academy. Valdez placed 2nd with a time of 13:10.  Other teammates who finished inside the top 10 were Qui Hawkins (5th) and Kamaya Ronning (6th), to help the team to a second place finish behind Academy.

Los Alamos seventh grader Ryan Aldez, also took second place individually in his race, to lead the Hawks with a time of 12:51. The Hawks won the seventh grade boys team race with their next four scoring runners all placing in the top 10: Benjamin Gellis in 4th, Rueben Goettee 5th, Caiden Kersey 6th and Jonah Mondragon 7th. The team had a tight pack, with just 49s between Aldez and Mondragon.

Cecily Palmer ran a strong race to lead the 8th grade girls with her 2nd place finish in a time of 14:22. Teammates Mabel Pyle took 8th and Kara Moss was 14th. The 8th grade girls did not field a full scoring team. As training continues we look forward to seeing this group grow with the addition of a few more ladies.

In the final race of the day, the eighth grade boys brought home the winner’s trophy. Dominic Martinez finished in 2nd place with a time of 12:47. Teammates William McTeigue (4th) and Sebastian Wood (7th) also finished in the top 10.

Every eighth grader who competed, improved their times from the same course last year. Most improved were Joseph Lui and Kara Moss, both taking 6 minutes off their previous time.

“We are very proud of the effort that all the kids put forth and are excited to race again,” Coach Lindsey Montoya said.

Los Alamos Middle School Cross Country team will compete again Sept. 10 at the Academy for Technology and the Classics Invitational in Santa Fe.