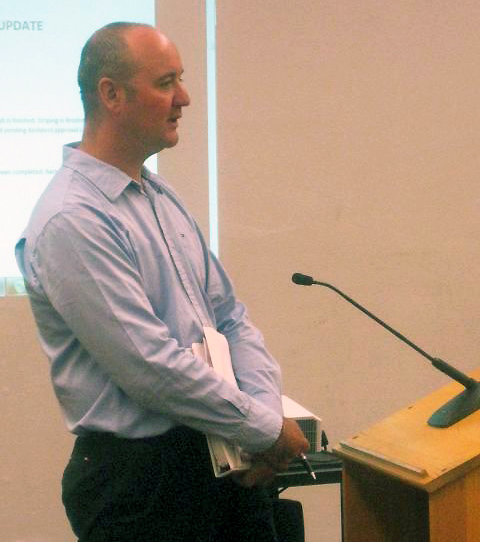 Dave Wharram of Gerald Martin briefs the Board of Education on the status of the Los Alamos Middle School construction project during Tuesday’s meeting. Photo by Kirsten Laskey

Despite a two-week delay in the construction project, Los Alamos Middle School was ready to greet students for the 2012-2013 school year Wednesday.

Dave Wharram of Gerald Martin, which serves as the owner representative for the project, reported the good news to Los Alamos School Board members during their regular meeting Tuesday night.

“McCarthy, the contractor in charge of the project, pulled out all the stops,” Wharram said.

On Tuesday, there was a big effort to get the move of the portables finished.

“It’s been a very busy time, but the work has gotten done in time for school tomorrow,” he said.

That work included demolishing the 100 and 500 buildings, clearing the site, digging trenches and burying utilities for the portables.

The site is now ready for above ground work to begin, Wharram said.

Wharram reported that the bus loop is scheduled for completion Sept. 15.

It wasn’t easy getting to this point. First, the project came to a halt when a contractor who bid on the construction filed a protest against McCarthy.

Bradbury Stamms claimed that McCarthy should not have received an in-state preference from the state taxation and revenue department. The protest didn’t stand and the project began.

Then there was a lengthy delay before the portable classrooms were erected.

When School Board President Kevin Honnell asked about the time it took to move the portables from Los Alamos High School to LAMS, Wharram pointed out that a foundation and utilities had to be in place.

“All that work needs to happen … before the portables are installed,” Wharram said.

A bus loop is still under construction at LAMS. School Board Secretary Melanie McKinley asked about the parking and parent drop-off situation in the meantime.

Wharram explained that an overflow parking lot has been created so parents can circle through the north lot as well as drop students off on North Mesa Road. An additional sidewalk also was constructed, he said.

Wharram asked the board to bear in mind that this situation will only be in place for a month until the new bus loop is completed.

She had received concerns from teachers regarding the cleanliness of the facilities, furniture placement and other issues, but after touring the site, Mills said, “Everyone has pulled together.”