LAMS Announces Athletes Of The Year 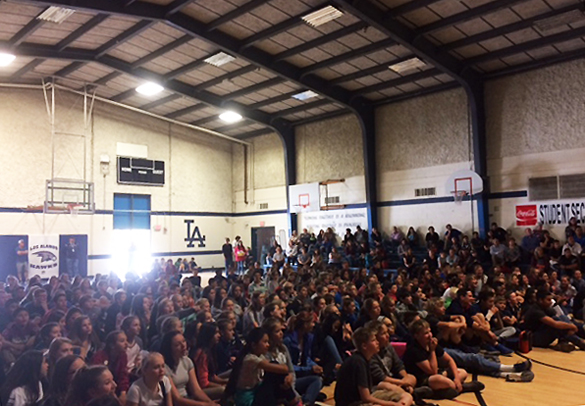 LAMS students gather to hear the annual Athletes of the Year recipients announced Wednesday in the school gymnasium. Photo by Maire O’Neill/ladailypost.com 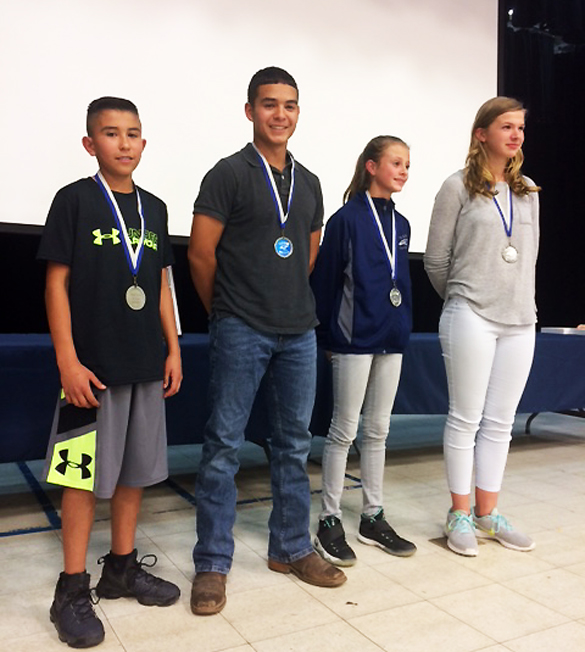 The awards are based on a recommendation from each athlete’s coach and criteria in the areas of athletic skill and performance, the number of sports in which they participate, attitude, effort, citizenship and grade point average.

“This is a way for our athletic program to recognize four student athletes who stand out amongst their peers,” Athletics Coordinator Daren Jones said.

Recipients of the award received a Hawk Athlete of the Year medal and their names will be engraved on a perpetual, which hangs in the gym hallway at LAMS. 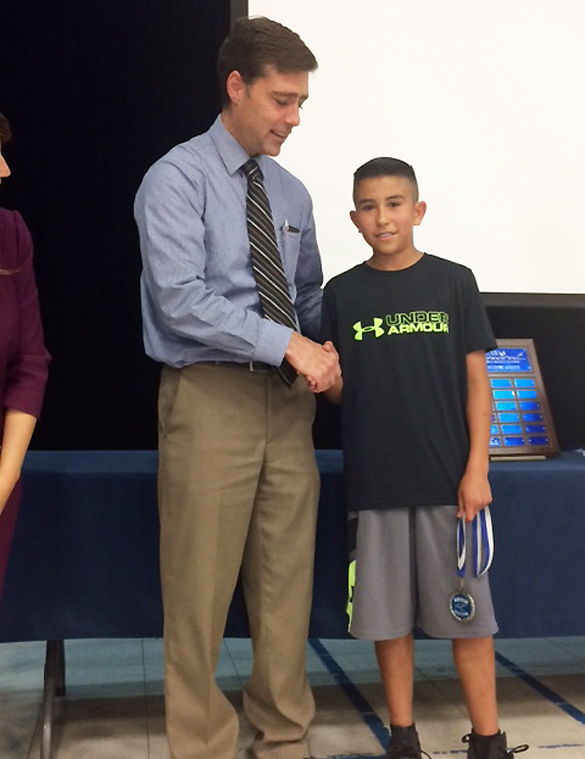 “Ryan was the No. 1 seventh grader at every single cross country meet last fall. He had three individual first place finishes in races consisting of 60 to 135 runners. At the combined seventh and eighth grade meet at ATC, he finished seventh in a field of 176 runners.

“He is a tough basketball player with quick hands and fee and a nose for the ball. He has the ability to pressure the ball and create turnovers for his team. He has the ability to control the tempo of the game. He is an offensive threat from the outside and can drive the lane for two. He is a vital part of his team’s success this season.

“As a member of the seventh grade boys track team at LAMS, Ryan clocked in at 2:32 in the 800 meter and 5:25 in the 1600 meter run. A highlight of Ryan’s season was winning the mile in the Los Alamos home meet where he moved up to compete in the eighth grade division.

“Ryan always displays a positive attitude and is very upbeat with his teammates. Ryan’s skill set stands out amongst his peers, but he is quick to encourage and congratulate teammates on their performance. He is a very quiet guy and always gives his 100 percent effort regardless of the circumstances. Ryan focuses on what is within his control. He embraces every opportunity to learn. He trains well, practices well, and has a constant desire to improve, not just for himself, but for his team.” 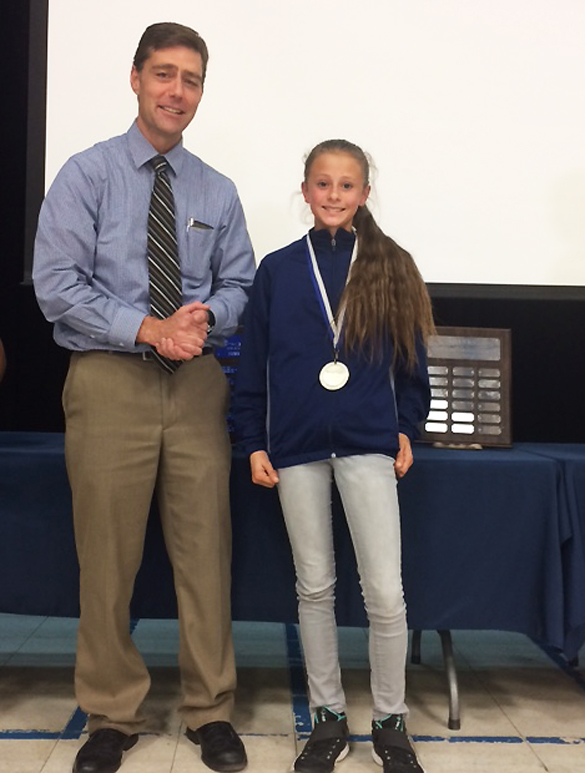 “Norissa was not only the front runner in every single race for seventh grade girls, she was always ahead of the field battling for the win or winning in dominating style. She never finished lower than second place with two wins and five runner-up finishes, including at the combined seventh and eighth grade race at ATC, with over 100 female runners.

“Norissa was a key ingredient in the success of the seventh grade girls basketball team. On the basketball court, she is smooth and graceful. She is an offensive threat from both the outside and driving the lane. Her defensive skills are intuitive and quick and she has a knack for grabbing the loose ball in a crowd.

“Norissa brought a rare dynamic to the track team this year. In addition to being a standout distance runner with best times of 2:41 in the 800 meters and 5:58 in the 1600 meters, Norissa earned her place on our nearly undefeated 4 x 1 team – a true sprinter’s event.

“She was also a huge contributor in setting a new record in the 1600 meters medley relay, running the 800 meters as an anchor. Before being set back by an arm injury, Norissa also posted her team’s fastest time for the season in the 100 hurdles at 19.4 seconds.

“Norissa has a great work ethic, is very coachable, and has a vast understanding of her sport. She sets realistic goals, and works hard to achieve them. Norissa is patient, knowing that growth is a day-to-day process, and she is open to critique. Norissa is committed to her development in everything she pursues.” 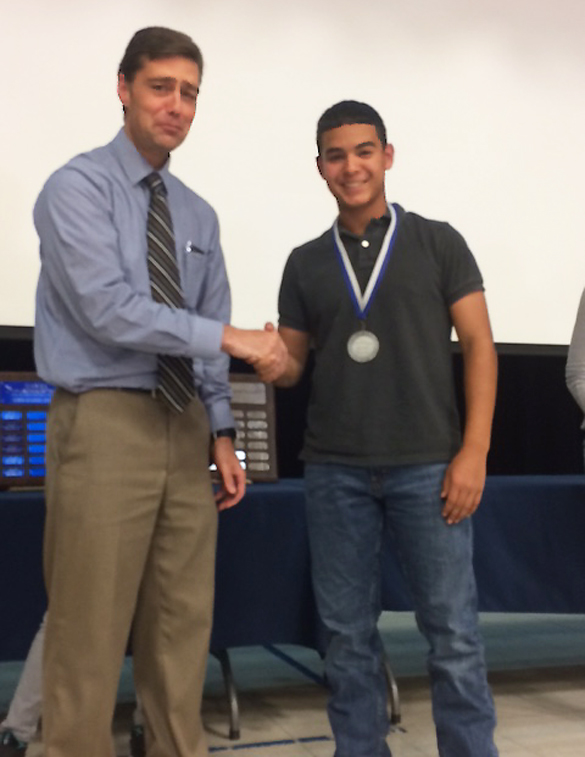 “James played fullback and middle linebacker for the Hawks football team. He is the team captain and a leader. He leads by his example; he understands the game and is eager to help his teammates. James also takes on the role of helping his teammates, encouraging and motivating them, and by showing that he cares about the guys he competes with. James is the kind of guy that always has you back and will never leave a teammate hanging. Statistically, James was responsible for more than 500 yards rushing and 10 touchdowns.

“In track, James was one of the top scorers on the 100, 200, 400, 4x1relay, 4×2 relay, medley relay and long jump. James was the top scorer at the Academy meet with 24 points to help the team win first place. James finished the season with a total of 18 ribbons, nine of which were first place finishes.

“James’ work ethic is awesome. He always gives 110 percent, regardless of the situation. While some athletes choose to coast knowing more skills/drills or conditioning lie ahead, James gives his all, pushing himself to his potential at all times while encouraging his teammates to do the same. James always puts in the time to improve his own skills for the benefit of the team. James will not be outworked by anyone. He is extremely coachable, takes time to learn the strategies of the sport, and he excelled with humility, confidence, and sportsmanship. 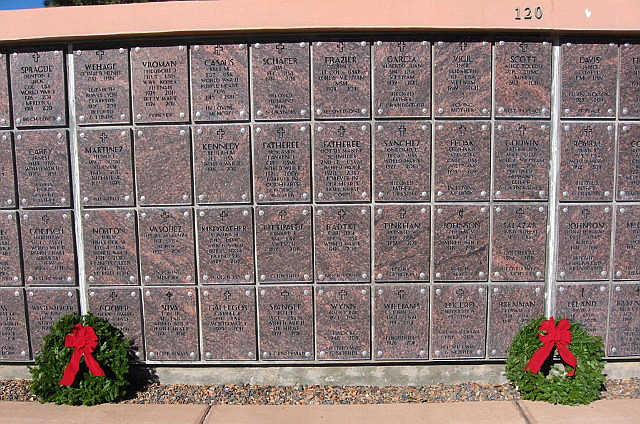 “Michaela is an athlete in the true sense of the word. She continuously strives to get better. She is coachable and is willing to take risks in order to improve her skill set. Michaela was one of the most improved players on the eighth grade volleyball team. She worked tirelessly to improve on her hitting and blocking. Michaela is also a team player. She celebrates the accomplishments of other athletes and she was always willing to accept any role she was given in order for the team to be able to win. Michaela is an excellent example of a student athlete and a great role model for others.

“On the basketball court, she is an intimidating force. She is an offensive threat from both the right and left sides. Her defensive skills are intuitive and quick, and she is a rebounding beast. She led her team in scoring and rebounding in most games and she was named an all-tournament player at the Pojoaque tournament. She continued basketball with six of her teammates participating in the Hilltoppers program.

“In track, Michaela and her relay teammates finished the season undefeated in every race they ran. She was a member of three record-breaking relay teams, including the 4X4, 800 medley and 1600 medley. She is fiercely passionate about perfection in running and would put in the extra work with her teammates to make sure their handoffs were seamless. She would also take time to help train the seventh graders. Her best times of the season were top three on our team in every distance up to the 800 m, 13.6 in the 100m, 28.96 in the 200m, 1:06 in the 400m, and 2:46 in the 800m.

“Michaela is a very hard worker and is always quick to encourage and congratulate her teammates. She always puts forth 100 percent in all her endeavors, which is evident through her hustle and personal drive in both practice and games. Michaela displays a positive attitude and outlook on sports. She has a good sense of humor and is a great teammate to all.” 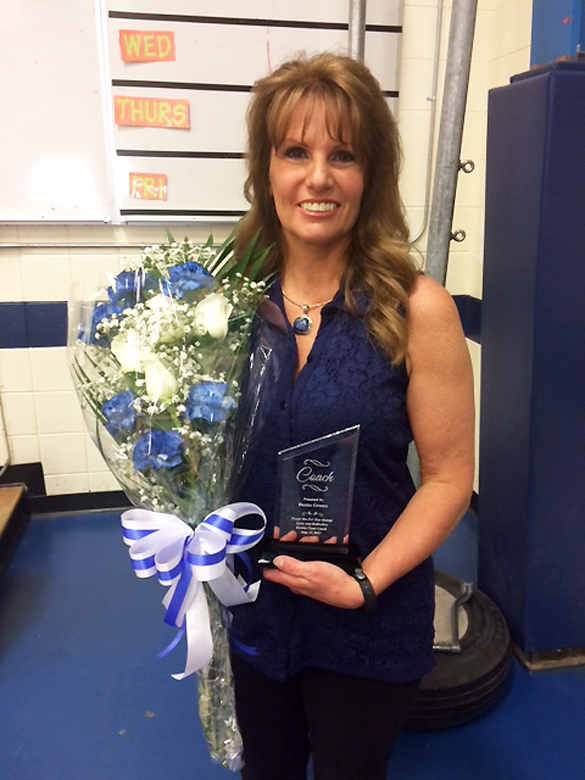 Cheerleading Coach Denise Green with flowers and an award she received Wednesday from LAMS students. Photo by Maire O’Neill/ladailypost.com 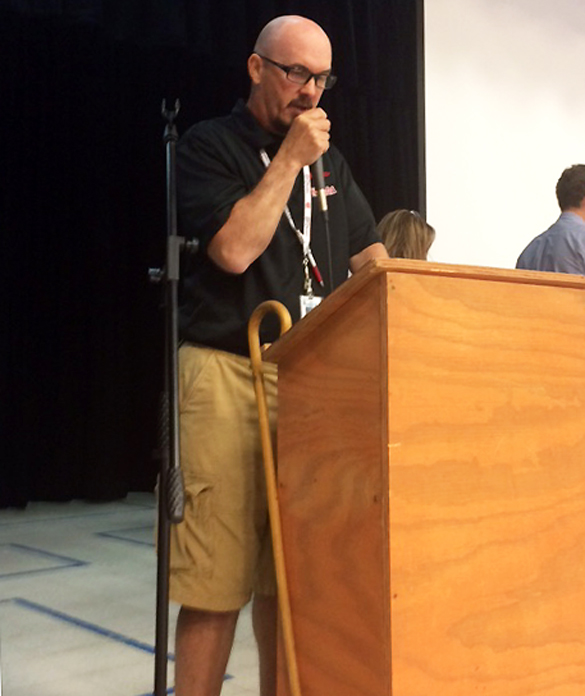