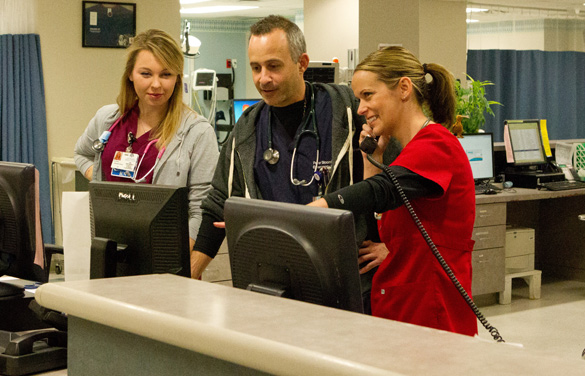 Los Alamos Medical Center (LAMC) has received the 2016 Women’s Choice Award® as one of America’s Best Hospitals for Emergency Care.

This evidence-based designation is the only Emergency Care award that identifies the country’s best healthcare institutions based on robust criteria that considers female patient satisfaction, clinical excellence, and what women state that they want from a hospital.

In the list of 360 award winners, LAMC, represents hospitals that have provided exceptional patient care and treatment, signifying LAMC’s commitment to meeting the highest standards in Emergency Care for women, their families and their community.

“The entire organization is committed to providing a quality experience for every patient that comes through our door,” CEO Feliciano Jiron said. “We have been working long and hard to build a team that excels at every aspect of emergency care. Our emergency room staff is truly exceptional.”

The America’s Best Hospitals for Emergency Care are hospitals that consistently rank among the best of the 3,800 hospitals reporting on the performance of their respective Emergency Departments.

They are judged on the following Emergency Department (ED) performance measures reported by the Centers for Medicare and Medicaid Services (CMS):

Each of the measures indicated above were weighted according to a survey of more than 1,000 women on their relative priority, and listed above in order of importance.

In addition, hospitals that fell within the bottom 25th percentile for patient recommendation scores were eliminated from consideration for the award.

For each Emergency Department measure, the top 25th percentile and the top 50th percentile are determined for all hospitals reporting the measure. Hospitals that ranked in the top 25 percent nationwide for a measure received points according to the measure’s relative importance.

Hospitals that ranked between 25 percent and 50 percent received half points. Points were then totaled for all measures, per hospital. Those hospitals with total scores that placed them in the top 10 percent nationally, earned the Women’s Choice Award.

“We have found that recommendations are an important consideration used by women in selecting a hospital for themselves and their family. By helping women know which hospitals in their area provide the best critical care, we are able to help them make better decisions, especially when it comes to emergency situations,” said Delia Passi, CEO and Founder of the Women’s Choice Award.

For more information on the 2016 America’s Best Hospitals for Emergency Care visit: http://www.womenschoiceaward.com/awarded/best-hospitals/emergency-care/.