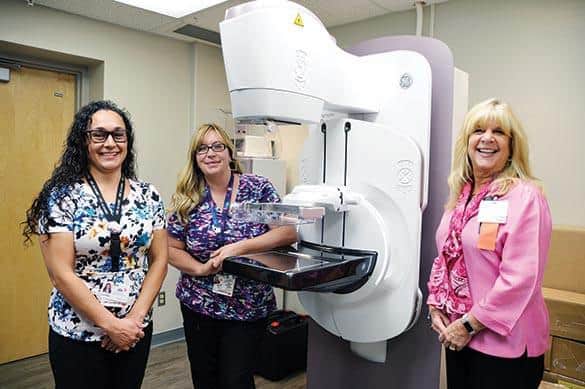 October, Breast Cancer Awareness Month, is the busiest time of the year for the Mammography Department of Los Alamos Medical Center, according to the mammography staff.

But this year, they expect to be even busier in the upcoming months, due to the new GE Senographe Pristina 3D mammography machine to help diagnose breast cancer that arrived earlier this month.

A Grand Opening Celebration is planned for mid-November at LAMC.

The positioning and compression are similar to a traditional 2D mammogram but when the radiologist views the images, they are able to see them in thin reconstructed slices. This helps to eliminate the issue of overlapping dense tissue and lessens the possibility of false positives.

“A lot of patients are waiting for the new machine, so we expect to have a busy November,” she said.

The Imaging Department has three licensed mammographers among its 18-person staff. Although she is now an administrator, Cazaux keeps her certification current, she said. The two regular mammographers are Maleea Medina and Loretta Rivera. The three women spoke Monday with the Los Alamos Daily Post.

Medina has been at LAMC 15 years and holds a number of certifications in various types of imaging. Rivera has worked at LAMC for 20 years, starting at the hospital right out of school and also works in various modalities.  Cazaux came to the hospital three years ago from Arizona. In addition to an MBA, Cazaux holds several imaging credentials and has worked in the field for many years.

“Between us, we have around 60 years of experience!” Cazaux said. “Helping patients on the administrative end is rewarding. I’m still able to pursue my passion for women’s health.”

When asked what makes their careers rewarding, Medina and Rivera said it’s the patients.

“We’re helping people,” Medina said. “We’re taking care of them in their time of need.”

“You build friendships with your patients,” Rivera added.

Working at LAMC is especially rewarding because of the staff in the Imaging Department, they said.

“We’re a family in this department,” Medina said. “We’re there for each other.”

“It makes a difference when you have a good team,” Rivera said.

The two enjoy working at a smaller hospital. The women work in a variety of imaging modalities, which is stimulating, they said.

“If we want to learn a new skill there is opportunity,” Medina said. “Cross training happens a lot in a small hospital.”

When it comes to the new machine, the three women are enthusiastic.

“This machine was designed by women!” they said. “It has flexible paddles that adjust to a person’s body and the rounded corners make things a bit more comfortable.”

Another plus is we will now be able to perform upright biopsies, which allow patients who have difficulty lying prone on a table, to sit in a chair during the procedure, Cazaux said.

“We’re so excited about this machine,” Medina said. “We waited four years for it.”

“It’s great to know we had the support of the Hospital Board and the CEO of the hospital (John Whiteside),” Cazaux said. “John was a great champion for us.”

“Doctors were recommending some patients have 3D mammograms and they had to go off the hill because there was no machine closer than Santa Fe,” Rivera said. “We’re looking forward to welcoming them back to the Medical Center.”