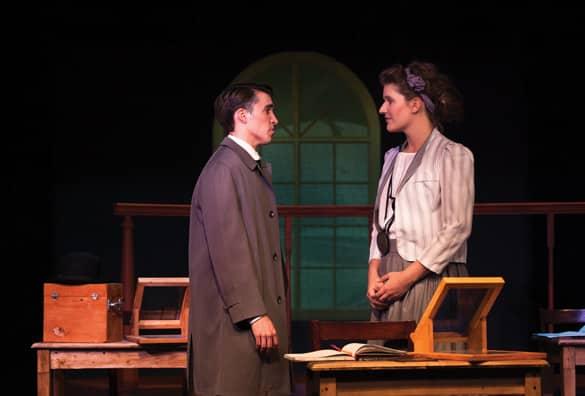 Peter Shaw (Kevin Pelzel) expresses to Henrietta Leavitt (Katrina Koehler) his great admiration for her as he tries to encourage her to join him on an ocean voyage to Europe. Photo by Elena E. Giorgi

Lauren Gunderson’s “Silent Sky” tells the story of “star-finding fiend” Henrietta Leavitt, who in the early 1900s, despite not being allowed near a telescope, made an astronomical discovery that profoundly changed how we perceive our universe.

Director John Cullinan said the play came to his attention through friends from his previous community theatre group in Massachusetts.

“It was one of the most beautiful scripts I’d read in a long while,” Cullinan said, “and it had a set of strong and relevant themes that I knew were perfect for Los Alamos: the struggles of women in science throughout history, the intersection of faith and science, and the conflicts we all feel when pulled in several directions by societal expectations and our own passions and vocations.”

“There’s a chance for each of these five actors to shine,” Cullinan said. “Add to this some really nice moments of technical wizardry and spectacle, and I think we have the perfect evening of theatre for a Los Alamos audience.”

As a LANL physicist, Koehler has an insider’s view into some of the challenges Henrietta faced.

“We still struggle with reconciling the responsibilities and expectations of the home with the siren call of science and answering questions,” Koehler said. “Some sacrifice one or the other, but Henrietta chose both and as a result had to make sacrifices in both arenas. But this is not just the struggle of the woman scientist. We all have multiple things pulling us in different directions and have to decide what can be sacrificed and what compromise looks like.”

Koehler described Henri as “unconventional and restless, but when she answers the call for a mathematician at the Harvard Observatory, she finds understanding among her fellow computers. Henri is enthusiastic with a wry sense of humour, and she is passionate in her pursuit of understanding.”
She said she will always “remember is the vulnerability of playing a character whose faults and strengths are my own.”

Bishofberger said she was drawn to “Silent Sky” because “scripts with strong female characters are still unfortunately rare … These women were far before their time and show that strength and intelligence have no gender.”

Beyond that, she said her character is “amazing.” “Annie … was brilliant in the field of astronomy,” Bishofberger said. “She’s a bit standoffish at first, but as the play progresses, it’s apparent that she’s actually more caring than she originally seems.”

Kathi Collins was unabashed in her enthusiasm for “Silent Sky,” and for the playwright, Gunderson, as well.

“I love the play,” Collins said. “I had recently performed another Lauren Gunderson play in Santa Fe, ‘Natural Shocks,’ about domestic abuse, and knew this playwright could write well. Then I read the script, saw the character of Williamina Fleming, and knew I had to audition.”

In Collins’ view, Williamina, as well as Henri and Annie, “remain unparallelled today in their accomplishments. The standards they created are still in use today by every astronomer in the world … For example, Williamina discovered the Horsehead Nebulae, novae and supernovae. Where would ‘Star Wars’ be without them?”

When asked what she’ll remember most about the play, she said, “The sky.  And to look at it.”

Jess Cullinan, playing Margaret, said for her, “This isn’t a play just about science or astronomy or history — it’s a human story of discovery and struggle, love and loss, and just figuring out how you fit as an individual into the whole of the universe.

“A lot can be made about it being specifically about the women who have been previously ignored by history, which is important, but I also see it as a step towards expanding our idea of the ‘everyman’ experience into an ‘every person’ experience. So often the default character in a universal story is male, but this play and other stories like it help us to see the universal in the female, on an increasingly equal footing. The struggle of institutional and societal sexism is definitely on display, but by the end I think people of all genders will identify with Henrietta because she’s so profoundly human.”

Cullinan mentioned that “Silent Sky” will feature the work of three female composers as well: Rachel Mohlman, Cécile Chaminade (1857-1944), and Mary Howe (1882-1964). She will play two sections of Mohlman’s 2014 arrangement of “For the Beauty of the Earth” as underscoring. For Margaret’s composition, she’ll combine Chaminade’s “Serenade,” op. 29, and the main theme from Howe’s “Stars” symphony into one piece that anchors Henrietta’s discovery.

Pelzel, whose character Peter oversees the female “computers,” said it becomes “very apparent that the women are much more knowledgeable about astronomy than he is … I think the most resonant part is just seeing some specific examples of the unnecessary struggles that women had to go through due to the gender inequality at the time — also how they overcame it.”

Director Cullinan added, “I think audiences will leave feeling a deep connection to the people in this story. Their lives and struggles are relatable and still relevant. It’s a play that’s not so much about witnessing history as it is seeing ourselves reflected in it. And, perhaps more than that, they’ll leave with eyes wide in wonder, seeing the beauty in the stars the way Henri did. The cast brings so much of themselves into these characters, and they floor me every rehearsal. I don’t want to sound biased, but I think you’re about to see one of the best-acted plays on the Little Theatre stage.”

Tickets are $15 regular admission / $13 for seniors and students and available at CB FOX, online at lalt.org or at the door. 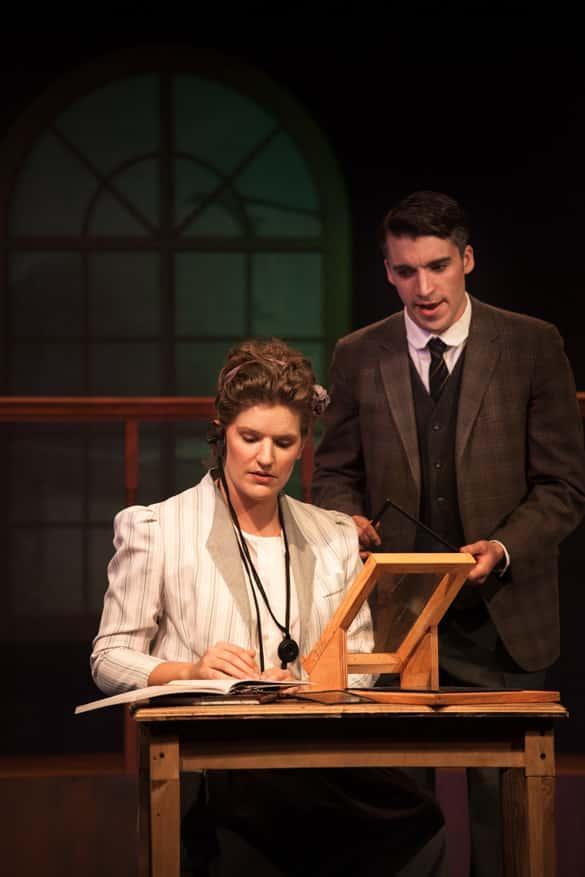 Henrietta Leavitt (Katrina Koehler) records data from an astronomical image as her supervisor Peter Shaw (Kevin Pelzel) speaks to her in the work room for women ‘computers’ at Harvard College Observatory. Photo by Elena E. Giorgi 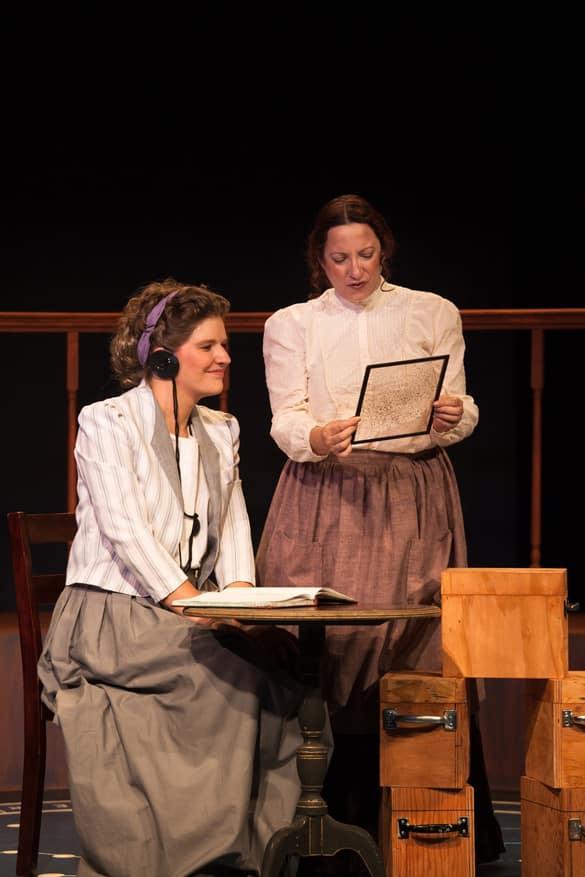 Henrietta Leavitt (right, Katrina Koehler) seeks to comfort her sister, Margie (Jess Cullinan), who is dealing with trying to hold the family household together after their father suffered a stroke. Photo by Elena E. Giorgi