LALO ‘Guys And Dolls’ Comes Up A Winner 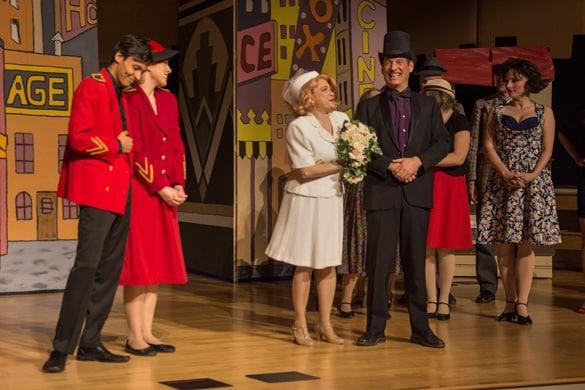 For its 70th anniversary, Los Alamos Light Opera (LALO) brings us “Guys and Dolls.” The show opened Thursday and continues through Saturday, with a  2 p.m. matinee  Saturday in addition to the 7:30 p.m. evening show.

This perennial favorite debuted in 1950 and many hundreds of productions later, it still delivers. The music and lyrics by Frank Loesser are the main reason the show continues to delight. LALO provides us with a 20-person live orchestra under the baton of Musical Director Gretchen Amstutz. It’s the perfect backup to the singers and is just loud enough.

“Guys and Dolls” almost didn’t happen this spring because of delays in construction at the Duane Smith Auditorium. Crossroads Bible Church stepped up as the new venue and the acoustics are great. I liked the smaller venue and the intimacy with the actors it provided.

I’ve seen four stage renditions of “Guys and Dolls” and, of course the 1955 classic film. You’ve probably seen at least one version, but if not, here’s the story. Gambler Nathan Detroit is looking for a place to hold his latest crap game, but the law is on his tail and he needs to shell out for a venue. The police are not the only ones who have a beef with Nathan. His girlfriend, nightclub singer Adelaide, has finally had it with their 14-year engagement as well as Nathan’s gambling ways. It’s marriage or it’s over.

In order to get the funds he needs, Nathan bets well-known gambler Sky Masterson he can’t convince the upstanding missionary, Sarah Brown, to join him on a dinner date to Havana. Predictably, when Sky and Sarah get together, sparks fly. This is a romantic comedy, so it’s a pretty safe bet things will turn out well in the end for the two couples, but the twists and turns of the plot make things lots of fun along the way.

I walked into the show experiencing a little bit of “been there, done that,” but this production grabbed me at the first song, a marvelous rendition of “Fugue for Tinhorns” by Nicely Nicely Johnson (Patrick MacDonald), Benny Southstreet (Scot Johnson) and Rusty Charlie (Darryl Garcia). I was hooked and stayed hooked.

The singing in the production is first rate. Joy Reynolds as Sarah and Elisa Enriquez as Adelaide, will knock your socks off with their vocal numbers. Bear Schact (Sky Masterson) has a wonderful, mellow voice. Jeff Favorite (Nathan Detroit) and MacDonald are also outstanding soloists. (I’d always cross the street to see MacDonald sing and dance.)

The big production numbers are my favorite part of musical comedy and this show has some great ones. I especially loved “Luck Be a Lady” and “Sit Down You’re Rocking the Boat.” There’s nothing like a well done singing and dancing extravaganza!

Music and dancing aside, it’s the acting that sets this production apart from others I’ve seen. I absolutely loved the four principals. The actors brought nuances to the roles that are often missing, especially from the suave Masterson and the prim Sara. They manage to be vulnerable without compromising their character.

Neither one comes off as a stereotype. Likewise, Enriquez brings a streetwise quality to Adelaide that takes her beyond the dumb blonde. Favorite has more heart and fewer hard edges than the typical portrayal of Nathan. The characterizations in the script could come off as mere “types,” especially given the 1950s sex-roles. They don’t. You’ll be rooting for the four of them all the way.

The supporting cast does a fine job. I especially loved Suzy Kroesche as General Cartwright. Larry Gibbons stole some scenes as Harry the Horse.

Director Laurie Tomlinson, Choreographer Brooke Davis and Musical Director Gretchen Amstutz have provided Los Alamos with an excellent production, full of pizzazz. Don’t skip this show because you’ve seen “Guys and Dolls.” If you miss this one, you’ll be missing out on a great evening.

Producer Cindy Hines has placed tickets, $15 for general admission and $12 for students and seniors, at CB FOX, online at Brown Paper Tickets and at the door.