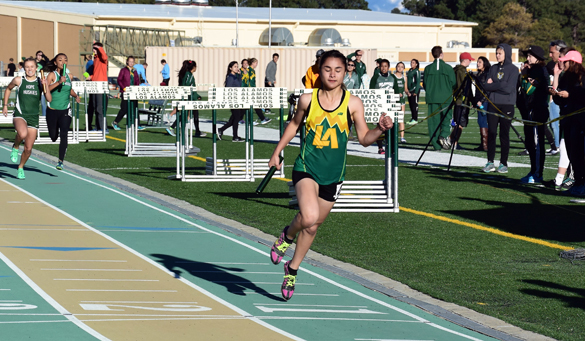 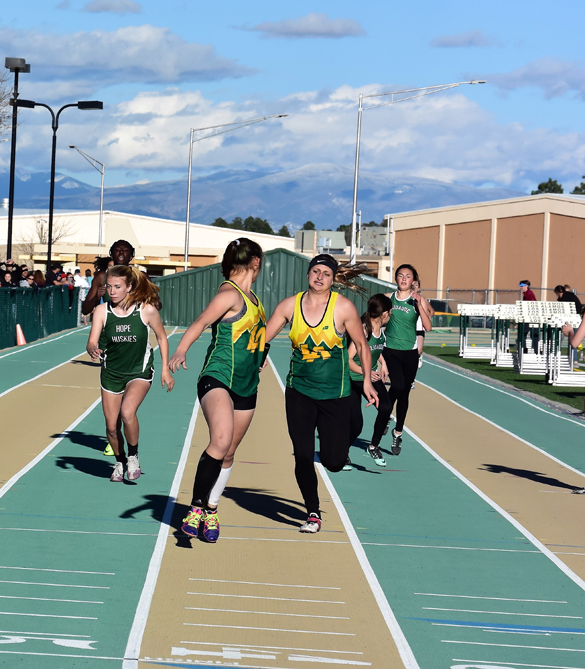 Liz Lockhart hands off to Sophie Wood in the 800-meter relay at the Los Alamos Invitational track and field meet March 24 at Los Alamos. The Lady Hilltoppers won the evnt with a state-qualifying time of one minute, 48.81 seconds.​ Photo by George Morse/ladailypost.com

Los Alamos senior Liam Johnson soared to a personal record 14 feet, 3 inches to easily take the pole vault event at the Los Alamos Invitational track and field meet March 24 at Los Alamos. So far this season, Johnson has set the standard in Class 5A, having the best state-qualifying mark in all classes in that event.

Johnson, who will sign a letter of intent to attend Northern Colorado University April 12, wants to go even higher. He missed three attempts clearing the bar at 14 feet, 9 inches. That would have established a new school record. Ironically, that record is held by an athlete who is now his coach. Benigno Sandoval, a 2009 graduate of Los Alamos, holds the record at 14 feet, 8 inches.

“Pole vaulters have a reputation of being a bit crazy,” Johnson said. “You have to be sort of weird. I like the risk.”

Having been on both sides now as an athlete and now as a coach, Sandoval definitely prefers the latter.

“It’s significantly more fulfilling and exciting as a coach,” Sandoval said. “It’s a deeper feeling. (Johnson) is exceptionally coachable. He thinks about what you’ve said and applies it.”

Johnson was not the only athlete to have a good day. Junior Ben Schauer took second in the triple jump with a state-qualifying leap of 42 feet, 1 inch, as well as a second-place finish in the long jump where he was within an inch of qualifying. Nathaniel Ortega won the 800-meter run. Gabe Holinger took the high jump. Sam Harvey won the shot put and Arturo Rodriguez won the discus.

Los Alamos has established itself as one the top track and field programs in the state and is always a contender for a trophy at the state track and field meet. That success leads to young athletes who want to follow in the footsteps of those who came before them.

“A high percentage of the kids participate in athletics,” said Los Alamos Coach Steven Montoya who is in his second season. “We have 75 boys, which has got to be one of the largest in the state. Our Middle School program is doing a great job. We have 160 kids in it, so the future looks good.”

The Los Alamos High School Lady Hilltopper have won six state track and field championships and this season are already establishing themselves as solid contenders to bring back a seventh state title.

Leading the way for the Lady Hilltoppers is Elena Abeyta, who turned in state-qualifying performances in two events, both of which she had already qualified for state. Abeyta won the 400-meter run and lowered her state-qualifying time to 59.38 seconds.

Abeyta led a strong group of Los Alamos athletes in the long jumps, taking first place with a leap of 18 feet, 1.5 inches. Teammates Ona Gartz, Elizabeth Lockhart and Katie Green finished second, third and fourth, respectively, in the long jump. Abeyta, Gartz (17 feet, 9.5 inches) and Lockhart (17 feet, 8.5 inches) have all qualified for the state track and field meet, with Abeyta’s leap being the second-farthest in the state so far.

Rebecca Green and Zoe Challacombe finished first and second, respectively, in the shot put. Green had a state-qualifying toss of 34 feet, 9.5 inches Both Green (36 feet, 6.5 inches and Challacombe (34 feet, 3 inches) had already qualified for state in earlier meets this season.

Challacombe added a first place in the discus with a state-qualifying throw of 103 feet.

Los Alamos girls track coach Aaron Padilla is in his first season at Los Alamos after coaching track and field at Los Lunas High School. He takes over the highly-successful program from Paul Anderson.

Coach Padilla said he had “Some pretty big shoes to fill. I want to continue that tradition. It’s very easy to motivate this team, really they’re self-motivated. I think a lot of their parents ran for Los Alamos. That’s very important.”

The Los Alamos track and field team will be competing April 12 at the Sundevil Invitational at Sandia Prep High School in Albuquerque. 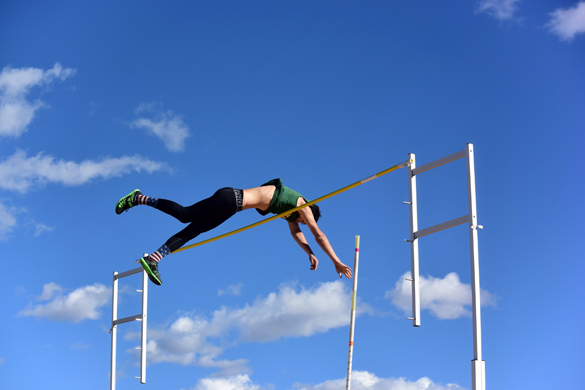