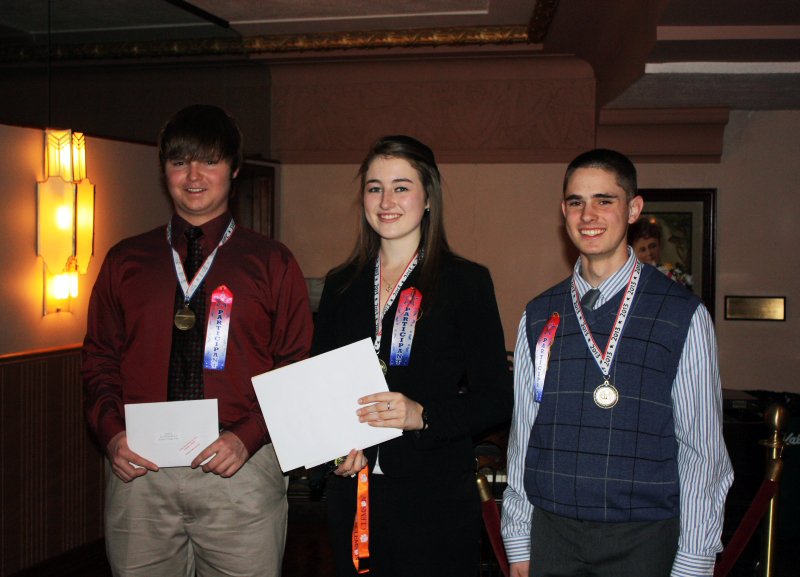 This will be Erickson’s third and final ISEF competition. Erickson is college bound for Clemson University in South Carolina to study bioengineering, planning to pursue a career in orthopedic surgery. Erickson’s award winning project is titled An Advanced Biomimetic Hand Using Additive Manufacturing.

Erickson summarized her project as: Many of the current prosthetic limbs are incredibly complex, require substantial time to fabricate, and many have limited flexibility. The purpose of this experiment was to explore the possibility of creating a biomimetic hand using additive manufacturing. By replicating key aspects of the human hand such as bones, tendons, nerves, skin, etc., there would be no need for traditional machined mechanical parts, allowing much lower weight, greater range of motion, more degrees of freedom and improved appearance.

The main materials of the hand are comprised of ABS plastic bones, silicone rubber for the skin, Kevlar tendons, and carbon nanotubes mixed with Sylgard for nerves. After a cast was made of a human hand, the skin material was applied and the rest of the components (tendons, servos, etc) were assembled. The movements of the hand were controlled by a simple electromyograph (EMG) sensor stuck onto the skin of the user. This successful prototype demonstrated the viability of the concept. In addition, a 3D camera (XBox Kinect) and 3D reconstruction software has shown that a limb can be scanned and the design can be rapidly programmed into a 3D printer. Currently, designs and modifications to a 3D printer are being considered for printing the entire hand. This new technology for a biomimetic prosthetic could be used in war zones, third world countries, etc. Although this use of additive manufacturing is looked at through the perspective of biomimetics, there is virtually no limit to the applications of this new technology.

Showcasing their talents for the first time, Intel ISEF competitors Kendrick and Murphy. Kendrick’s project is titled N-Body Simulation of Saturn’s Ring Structure. Summary: The project simulated the movement of Saturn’s rings and moons. Gravity interactions between Saturn’s moons and the ring particles cause gaps and ripples to form at specific locations within the rings.  The simulated ring structure matched the observations from NASA’s Cassini spacecraft which is currently orbiting Saturn. The project also simulated a comet impacting the rings, which produced a spiral wave similar to the one observed from the comet Shoemaker-Levy 9 impact through Jupiter’s rings in 1994.

Murphy’s project is titled The Effects of Vorticity on Vortex Formation and Morphology. Brief Overview: David studied the role circulation plays in the formation and properties of atmospheric vortexes, such as dust devils. This was done by constructing a laboratory vortex generator and using particle image velocimetry to measure flow velocities inside vortexes formed under different initial circulation. The morphology of the vortex was studied by making the vortexes visible using glycerin vapor. Two basic vortex structures were identified in different circulation regimes with distinct formation rate and stability properties in each regime.

Each year, hundreds of Los Alamos County students compete at the local district fair with the opportunity to move onto the regional and state fairs. Qualifying high school students at the regional and state levels can be chosen from among hundreds for coveted spots at the Intel ISEF annual fair. More information about the ISEF can be found at www.societyforscience.org/isef/.