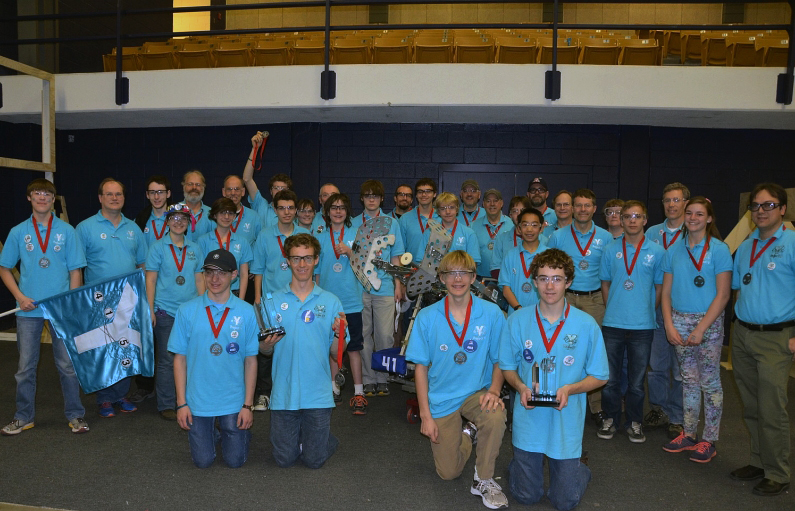 In an exciting double-elimination tournament that went down to the wire, the Los Alamos High School FIRST® Robotics Competition (FRC) Team 4153 – Project Y dazzled the audience with its performance and brought home a silver medal from the FIRST® (For Inspiration and Recognition of Science and Technology) Robotics Hub City Regional in Lubbock, Texas last weekend.

A total of 42 teams from Texas, Oklahoma, New Mexico, Colorado, Arizona, California, Washington, D.C. and China came together at the Mac Davis Memorial Arena on the Texas Tech campus to compete for top honors in Aerial Assist, a game played on a 25×54-foot court by two competing alliances of three robots each.

The objective of the game was to advance a large exercise ball down the court and score as many goals as possible in a series of randomly-seeded 2.5-minute qualification matches; bonus points were awarded for autonomous goals and “assists”, making sensing/programming and teamwork essential components for success. The top scoring teams at the end of qualification rounds chose permanent 3-team alliances that then advanced to the championship rounds.

The LAHS team was seeded 10th after playing 12 qualifying matches and captained the 7th-ranked 3-robot alliance for the elimination rounds. Project Y’s alliance out-performed higher-ranking alliances in both the quarter-finals and semi-finals to earn a place in the finalist bracket.

After narrowly losing the first game in the finalist match to the #1-ranked All-Texas/Hometown Alliance, Team 4153’s alliance came back with a nail-biting one-point victory in the second game. They succumbed to heavy defensive action in the third and final game, earning a very respectable 2nd-place overall finish. The winning alliance will proceed to the FIRST International Championship Games at the end of April in St. Louis.

FRC Team 4153’s robot, Richard Feynbot, is a 120-pound robot that can pick-up, catch, run-with, toss and shoot a large exercise ball at varying angles and speeds. It was designed, fabricated, programmed and tested in just six weeks by a team of 30 high school students working with 18 mentors from the local community. Feynbot features a mecanum drivetrain, pivoting salad-tong-like grippers, high-precision ultrasonic position sensing and vision targeting, and a National Instruments cRio controller programmed in Java for both autonomous operation and joy-stick interactive control.

Team 4153 thanks its very generous sponsors: ASME Northern NM, LANB, LANL Community Programs Office, Neptune & Co, Thornburg Investment Management, UNM-LA, The New Mexico Consortium, The Blackwell-Carroll Group at Morgan Stanley and our many other supporters; we couldn’t do this without you!

Team 4153 and Richard Feynbot will next compete April 3-5 at the Colorado Regional at the Daniel L. Ritchie Center at the University of Denver. The event is free and open to the public.

Learn more about FIRST® Robotics and LAHS’s FRC Team 4153 by visiting the websites http://www.usfirst.org and http://www.team4153.com.