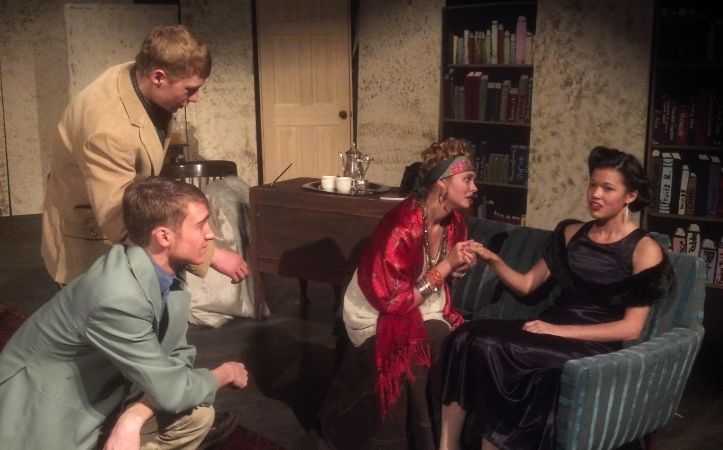 The Los Alamos High School Olions Thespian Club opened their season this weekend with a “whodunit” called “The Musical Comedy Murders of 1940” by John Bishop.

Directed by Rachel Peck, the show is a funny thriller with one twist coming after another. You have a German maid, an Irish tenor, an uncover cop and no one is really what they seem.

This is the first full production the Olions have put on in the new Topper Theater. The smaller space worked well with the intimate nature of the production.

The students showed high energy and were obviously having a great time on the stage. Through a few technical glitches, they kept their heads and put on an entertaining and fast-paced show.

The play takes place in the library of a mansion in Chappaqua, New York in December 1940, owned by Elsa Von Grossenknueten, played by Rosemary Vigil.

Vigil is the perfect Elisa, an eccentric Pollyanna type, who wants to solve the mysterious murder of her friend Bebe McAllister.

The role of fun-loving Elisa, who thinks chasing after a killer is fun, was an easy one for the vivacious Vigil.

Charlie Herrmann as tenor Patrick O’Reilly has an credible Irish accent without the usual Irish Spring brogue. His brother, Max Herrmann, the only freshman in the play, made a lovable comedian Eddie McCuen whose character is based on the legendary Bob Hope.

Katie Downing’s voice shone as singer/dancer Nikki Crandall. Her movements on stage were graceful and flowing.

Mirelle Naud is the unpredictable and emotional Bernice Roth who will probably remind you a little of a number of eccentric, Bohemian women whose paths you have crossed. Her emotional outbursts and outrage are believable and surprising at times.

Daniel Hill drifted easily into the role of the name-dropping director Ken De La Maize who frequently lists names of celebrities with whom he has worked.

In this his first play, Eric Begnaud’s portrayal of the serious policeman Michael Kelly contrasts well with the artsy personalities of most of the other characters.

Haley Henson is absolutely “divoon” and elegant as Broadway producer Marjorie Baverstock. Dimitry Bronszi plays Roger Hopewell, the composer who enjoys teasing others but is quickly irritated when others insult his musical style. His otherwise calm demeanor complements his partner, Bernice.

Congratulations to Rachel Peck on a successful and entertaining first production with the Olions. The play will be presented again at 8 p.m. Friday, Oct. 26 and at 2 p.m. and 8 p.m. Saturday, Oct. 27 in the Topper Theater.