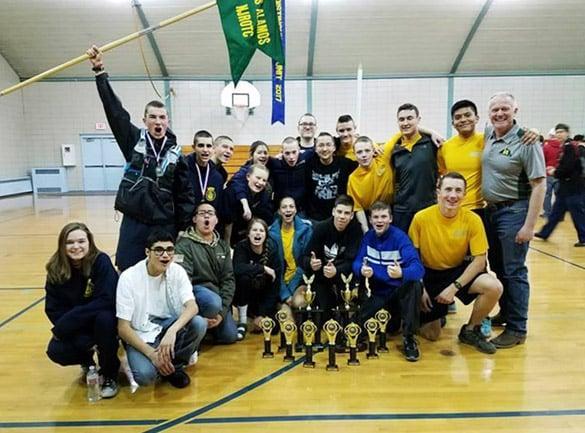 Twenty cadets from Los Alamos High School NJROTC traveled to Widefield, Colo. to compete Jan. 27 in the Area 13 Drill Meet where they achieved high awards for their best efforts in drill, academics and physical fitness.

The weekend began with a special tour of the United States Air Force Academy where Vice-Wing Commander Cadet Colonel Hoyer and Cadets Jack Smith and Griffin Gluck led the LAHS cadets on a guided a tour, which didn’t stop at the Visitors Center. Cadets got a glimpse inside of the lifestyle of Academy cadets as they toured dorms, saw the USAFA Silent Drill Team practice, and heard the large organ in the cadet chapel.

Cadet PO3 Kaden Lim said he thought all the hard work during practices had paid off.

“I thought that we worked really hard coming up to this drill meet and it turned out great for us,” he said.

The first event of the Drill Meet was the academic exam in which cadets were tested on a wide variety of topics from historic space operations to nautical terms. LAHS placed third in this event. Cadets then performed their Armed and Unarmed Exhibition routines, incorporating creative routines involving rifle and other drill movements, which earned them second place in Armed Exhibition and first place in Unarmed Exhibition.

“This drill meet represented the cumulation of large efforts of many cadets, our parents and our Senior Naval Science Instructor Cmdr. Brian Gauck,” Thompson said. “It has provided confidence and promises competence coming into the rest of the drill season.”