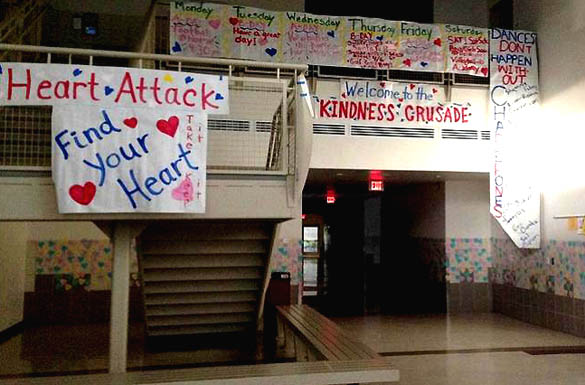 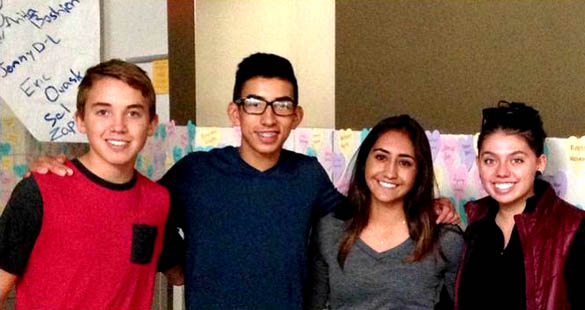 The LAHS Natural Helpers (http://www.preventionnewmexico.com/Natural_Helpers.html) and the Student Leadership team spent the weekend cutting out hundreds of paper hearts, writing the names of every student on them, and hanging them up in the A Wing Lobby. On Monday, the Topper students were instructed to find their heart, do kind deeds for others, and give their heart away to someone else. At the end of the week students received prizes.

LAHS Counselor Cristin Haake suggested the idea to Lynn Ovaska, who is the 11th and 12th grade AP Psychology teacher and coordinator of the Natural Helpers team. Natural Helpers is a statewide suicide prevention program that empowers youth to watch out for each other, recognize when their peers are having trouble and respond.

“At the end of the day, there were over a dozen Natural Helpers, Student Leaders, and their friends in my classroom cranking out the hearts,” Ovaska said. “By 4 p.m., we had made almost everyone’s heart!”

Those hearts contained the name of every Los Alamos High School student in the building and Sunday, the same students arrived to school on a weekend afternoon to hang all the hearts in the A-Wing Lobby and surprise students Monday morning.

“We’ve gotten great feedback about it, and most students have really been buying into the idea,” said Ben Rees, a student who contributed to the project from idea to end and was thrilled with the results. “It’s been a really unique experience watching everyone spread kindness that we all hope will carry over into all the weeks following our Kindness Crusade.”

Ovaska viewed, “amazing sweetness,” throughout the week seeing students engaged in the process, helping each other, wearing their hearts with pride and seeing kindness in action.

Ovaska overheard a student saying, “This is the sweetest thing our school has ever done.”

Another student tore her heart into little pieces so that she could give a tiny piece to the all of the people on campus who have made a difference in her life.

Ovaska also took her own time to add hearts for the 100 staff members of the Hilltopper family, so everyone could share in the love throughout the week.

It goes to show how a simple idea can spark a movement, not just on a special day but anytime and throughout the entire year.

Thanks to the LAHS Natural Helpers program for reminding us all just how far a little care and compassion can go.