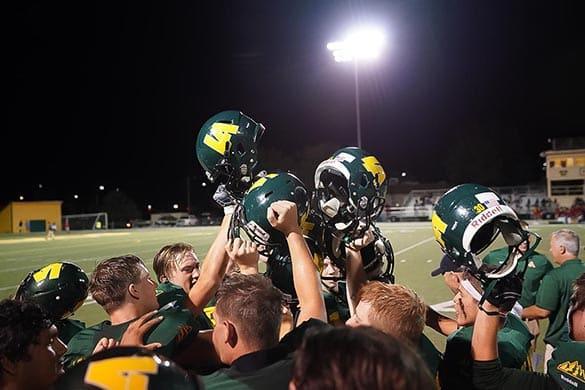 The Topper Football team celebrated their victory over the Española Sundevils Friday night at Sullivan Field. The Toppers won by a large margin, the game last year was quite different as the Sundevils lead the game until the last minute of the game when Dylan Irish threw a Hail Mary pass to Jack Stewart in the end zone for the victory. So, this year’s victory margin of 57-12 was a bit of a surprise. Coach Garrett Williams was very pleased with the team’s execution of the plays on offense and defense and overall team effort. Photo by John McHale/ladailypost.com 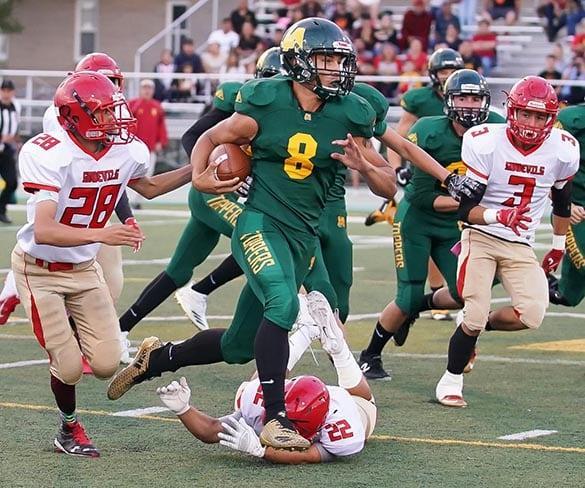 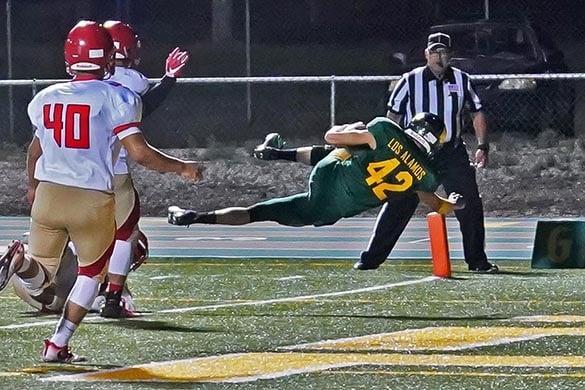 Cade Yost breaks a tackle and flies in for the third touchdown of his four touchdowns of the contest. Photo by John McHale/ladailypost.com

Despite being outnumbered by the Espanola Valley High School football team, Los Alamos High School routed the Sundevils 57-12 in their opening game of the season Friday evening in Los Alamos.

The former District 2-5A  rivals had battled tooth-and-nail the in 2016 and 2017 with the Hilltoppers claiming victory by a single point in both victories. This season, Los Alamos looked sharp and executed its plays crisply and with precision, while the Sundevils seemed a step behind and played catchup most of the game as the Hilltoppers steadily pulled away.

“That’s the way to start,” Los Alamos Coach Garett Williams said to the team after the game. “We played like a team and got it done as a team.”

Setting the tone on their opening drive of the game, Los Alamos started from Espanola’s 37-yard line following a good kickoff return by Dylan Irish. Four carries by Lawrence Armenta and a five-yard penalty on Espanola gave Los Alamos a first down at the 11-yard line. On second down, a counter play by Cade Yost caught the Sundevils by surprise and he ran into the end zone for a touchdown. The extra point by Ethan Hunt made the score 7-0 at 9:02 of the first quarter.

Espanola started from its own 35-yard line on its first possession. A promising drive by Espanola stalled on Los Alamos’ 32 yard line and Los Alamos took over on downs. Using a strong running attack and helped by two key offside penalties against the Sundevils, the Hilltoppers drove 68 yards for another score. Antonio Gonzales got the touchdown on a 10-yard run to give Los Alamos a 13-0 lead.

Penalties on both teams stalled the offense on both sides of the ball in the second quarter until a big play by the Sundevils gave Espanola its first touchdown. Quarterback Makaio Frazier fired a long pass downfield to a wide-open Kebin Marquez, who outran the defense for a 79-yard scoring play. That made the score 13-6 with 2:48 left in the first half.

Needing to answer Espanola’s challenge, Los Alamos put together a 65-yard drive behind the running of Irish and quarterback Walker Eaton. A personal foul on the Sundevils helped move the ball to the 11-yardline. Once again, a counter play by Yost worked to perfection and he scored his second touchdown with 46.5 seconds left in the first half to give Los Alamos a 21-6 lead.

On Espanola’s ensuing possession, Frazier dropped back to pass deep in his own territory. Hit as he threw, his wobbly pass was picked off by Eaton and returned for a touchdown. Irish ran for the two-point conversion and the two touchdowns just 15 seconds apart gave the Hilltoppers a 29-6 lead at halftime. It was a back-breaker for Espanola.

Espanola’s only chance of staying in the game was to score quickly on their first drive of the second half. That drive stalled and the Hilltoppers drove 68 yards for a touchdown, helped by a 65-yard run by Eaton. Eaton finished off the drive with a short run. That made the score 36-6 and the writing was on the wall for Espanola. Yost would score three more touchdowns, one on a pass from Irish and two on that counter play that the Sundevils never did find a way to stop.

Los Alamos had just 20 players in pads for the game, but the majority of those players are seniors who want to see Los Alamos back in the state football playoffs.

“They played the way seniors should,” Coach Williams said. “They played as a team and executed as a team. We were able to move guys around and they weren’t missing a beat.”

The small numbers of players on the roster means that most of the Hilltoppers will see action on both sides of the ball.

“’These guys have grown up going both ways,” Coach Williams said. “We train for that. We need to stay healthy if we are going to be successful.”

The Hilltoppers will face Taos High School Friday at Taos. The Tigers laid a 59-18 licking on St. Michael’s High School in their opening game Friday evening and are likely sky-high after that big win.

“We have to make sure we don’t get hurt,” Los Alamos senior lineman Jon Thomas Stewart said. “We can’t afford to lose anybody. Having your brothers playing next to you, you push forward and do it for them.”

Senior Irish saw action at running back, quarterback and had some bone-jarring tackles on defense.

“As a team, we’ve come together real strong,” he said. “Definitely, the goal is to go to state and it’s been the goal ever since I was a freshman. That would be big for this program.” 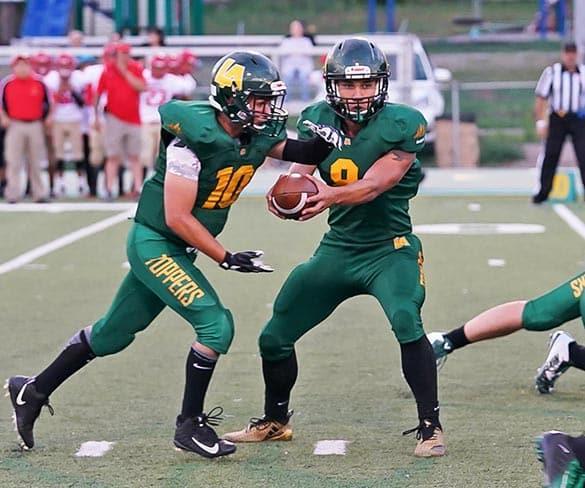 Dylan hands off to the middle linebacker, Lawrence Armenta in the first quarter. Photo by John McHale/ladailypost.com 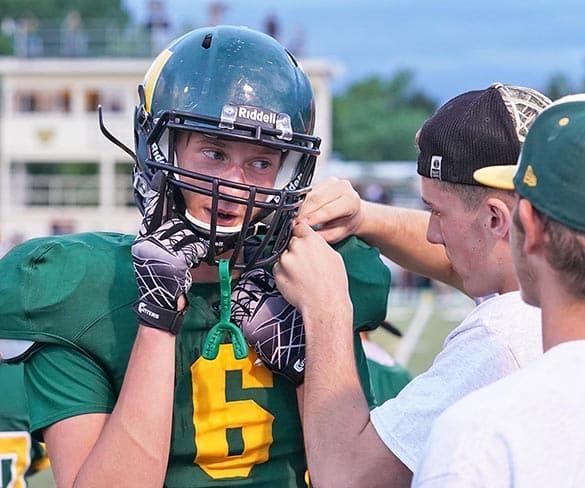 Peter Janke needs an adjustment to his helmet. Photo by John McHale/ladailypost.com 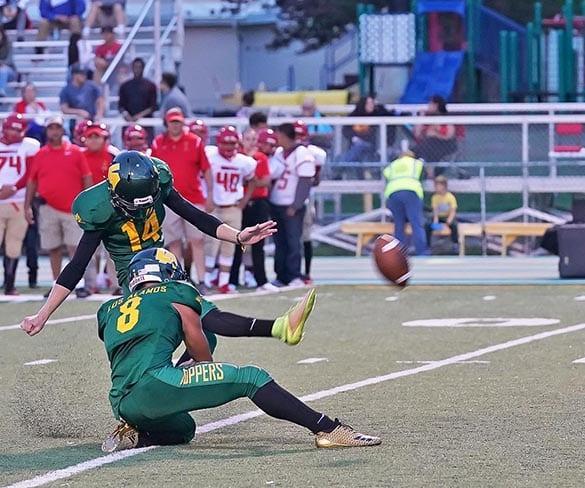 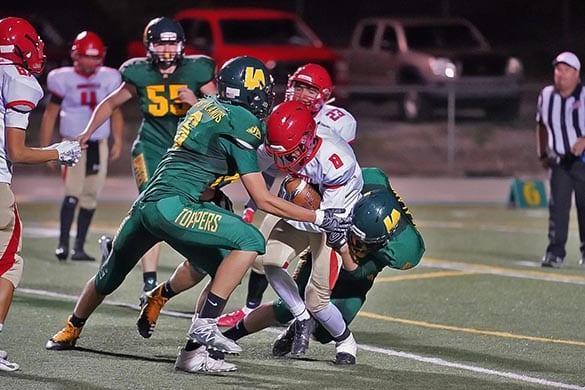 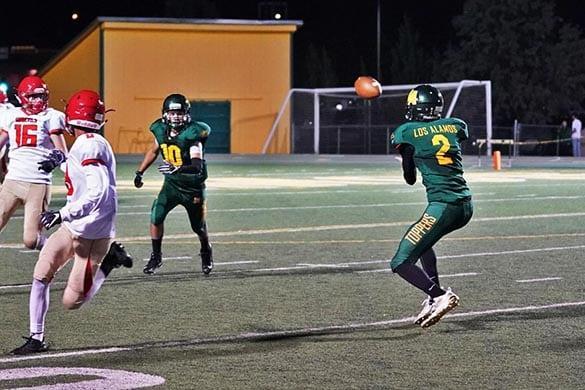 Walker Eaton intercepts a pass near the Española goal and ran it in for a touchdown. Photo by John McHale/ladailypost.com