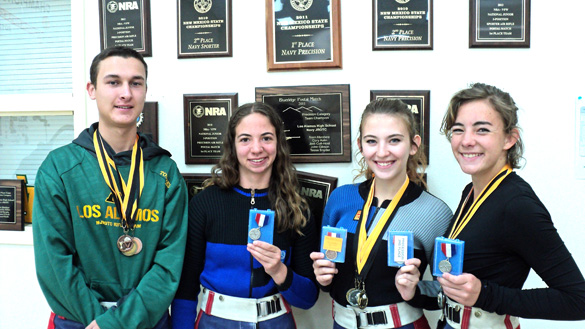 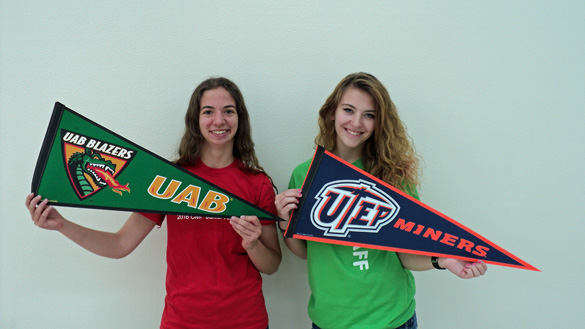 Samantha Miller, a 2017 graduate of Los Alamos High School, recently signed her way into history in becoming the first to earn a scholarship for rifle from LAHS, according to LCDR Wes Shumaker. She joins another New Mexico graduate from last year, Baily Powell who graduated from Atrisco High as a member of the University of Texas-El Paso womens’ rifle team.

Miller also recently qualified and competed in the women’s Junior Olympics at Colorado Springs, Colo. Qualifying at the top in women’s rifle for New Mexico, she competed in both rifle and air rifle at this highly prestigious event, Shumaker noted. Miller has qualified for the American Legion Championships in Colorado Springs which will take place in August. Qualification for this event actually occurred in January by submitting targets which are scored by the Legion. Based on the first round of scores, targets are sent to select individuals for a second round of qualifying. Final invitations are based on the scores submitted.

During her high school career, Miller achieved her Distinguished Air Rifle badge, was the Navy individual champion in 2016, member of the Navy Championship teams in 2015 and 2016, qualified and competed multiple years at the Junior Olympics in Colorado Springs.

Another 2017 graduate, Holly Hayes, has been recruited to compete on the University of Alabama-Birmingham rifle team beginning next year. UAB is beginning to build their rifle team which was reinstated just a few years ago. The team has placed an unprecedented two members at the collegiate level!

In other news, the  LAHS NJROTC precision rifle team placed first in the annual Commander’s Cup Match. The match is hosted by Lubbock High School and open to all of the 57 schools in Area 9 which includes New Mexico, parts of Texas, Oklahoma, Tennessee, Kentucky and Missouri. Several team members collected individual medals for placing in the top three in the individual categories of overall, prone position, standing position and kneeling position.

The precision rifle team has also qualified for the Civilian Marksmanship Program three-position championships held with the Junior Olympic three-position championships. These matches are held at the Gary Anderson air gun complex at Camp Perry, Ohio on consecutive days. The team will travel to Ohio in late June to compete in these prestigious events.