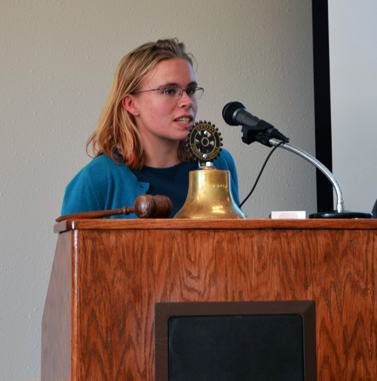 Chloe Keilers gives remarks in May after receiving the Rotary Club of Los Alamos Service Award. Photo by Carol A. Clark/ladailypost.com

She joins top science students June 10 to 17 July from across the nation and around the world for this acclaimed honors science leadership program, which ends with a highlight trip to Washington, D.C.

NYSC delegates will meet science policy makers and senators for a luncheon hosted by West Virginia Sen. Joe Manchin July 9, in the Caucus Room of the Russell Senate Office Building in Washington, D.C.

Dr. Francis Collins is the featured speaker. He is director of the National Institutes of Health and also led the Human Genome project. Collins authored The Language of God: A Scientist Presents Evidence for Belief, and is active in the topic of uniting science and faith.

The NYSC is a summer honors program for two of the brightest science students from each state and a select handful from around the world for a month-long science experience. NYSC was founded in 1963 and has run every summer since then. Throughout delegates’ stay at Camp Pocahontas in the West Virginia mountains, delegates study with and attend guest lectures by first-rate scientists from across the country.

They also engage in outdoor activities, including hiking and camping, rock climbing and mountain biking. The camp experience concludes with a highlight trip to the nation’s capital, wherein delegates tour the city’s museums and landmarks. Delegates also will have the opportunity to meet their state’s senators.

While at LAHS, Keilers was a member of National Honor Society, ran on the cross-country team and played stringed instruments including violin, viola and the cello. She also tutored students and assisted Latin I students during class.

Keilers won first place in the Los Alamos County Science Fair and second place in the Regional Science Fair in the physics and astronomy category. She also placed first in the New Mexico Junior Academy of Science Paper Presentation at regionals.

Keilers is the daughter of Chuck Keilers and Marjorie Madsen Keilers. She is a 2015 recipient of the Rotary Club of Los Alamos Service Award and Rotary Student of the Month in 2014.