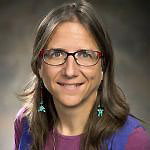 Washington, D.C.—Barbara Hopkins, professor of economics at Wright State University, has been selected as the 2015 recipient of the AAUP’s Georgina M. Smith Award.

During her time as grievance officer at Wright State, Hopkins has worked tirelessly to document, report, and remedy troubling patterns of racial bias in promotion and tenure in Wright State’s College of Nursing and Health (CoNH). Through Hopkins’s efforts, three faculty successfully won their appeals before the university-wide tenure and promotion appeals committee and received tenure.

In 2014, Hopkins wrote a letter to the Provost documenting the CoNH’s on-going promotion and tenure issues. A subsequent investigation confirmed her findings and included recommendations for remedying bullying and bias of nursing faculty.

“I am thrilled to receive the Georgina M. Smith Award,” Hopkins said. “I appreciate not only that it acknowledges the work that I have done, but that it asserts the values that I hold dear – that all women should be treated equally and with dignity and respect.”

The Georgina M. Smith Award was established in 1979 to honor the memory of Professor Georgina M. Smith (Rutgers University), who was a committed feminist, an AAUP leader, and a strong supporter of her faculty union. The award is presented “to a person who has provided exceptional leadership in the past year in improving the status of academic women or in advancing collective bargaining and through that work has improved the profession in general.”

Rather than award such recognition annually, the Association reserves the distinction for those occasions when some accomplishment in either area is identified as so outstanding as to merit being singled out. The last Georgina M. Smith award was presented in 2014.

The mission of the American Association of University Professors (AAUP) is to advance academic freedom and shared governance, to define fundamental professional values and standards for higher education, and to ensure higher education’s contribution to the common good. Founded in 1915, the AAUP has helped to shape American higher education by developing the standards and procedures that maintain quality in education and academic freedom in this country’s colleges and universities. The AAUP is a nonprofit professional association headquartered in Washington, D.C.