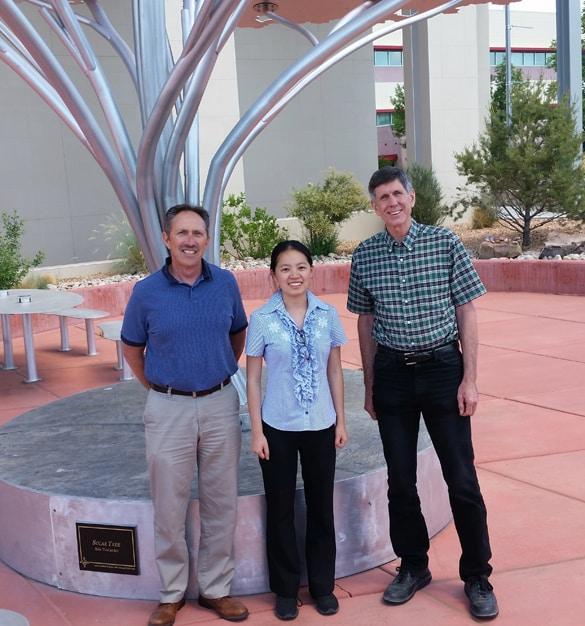 From left, Department of Public Utilities Deputy Manager Steve Cummins, Los Aamos High School graduate Sophia Li and DPU Manager Tim Glasco celebrate Li’s acceptance into the Millennial Nuclear Caucus. Courtesy photo
By KIRSTEN LASKEY
Los Alamos Daily Post
kirsten@ladailypost.com
Sophia Li, a 2018 Los Alamos High School graduate, has yet to start her college career at MIT but she already received an up close look at her field of interest: nuclear energy.
Li was selected to attend the Millennial Nuclear Caucus held June 15 in Idaho Falls. The Department of Energy and Idaho National Laboratory hosted the conference. The Utah Associated Municipal Power Systems (UAMPS) sponsored Li’s trip and the Pajarito Environmental Education Center selected Li to attend the caucus.
During the event, Li said she was able to meet with professionals in the field, who served as mentors during the caucus. The causes also featured optional tours of different areas of Idaho National Laboratory.
Li explained that she found out about the caucus from her science teacher who sent an email about it to her students. To apply, Li said she wrote a statement about why she wanted to attend the caucus. Additionally, she mentioned that she had worked as an intern at Los Alamos National Laboratory in NEN-5 under Dr. David Poston, running simulations.
Being accepted to attend the caucus was a surprised. “I did not think I would get this opportunity,” Li said.
She described the experience as “really cool”, and said she has always been interested in nuclear energy. Her father works in the nuclear field, which was a big influence on her life, she said.
Li explained that she knows first hand the benefits nuclear energy can offer. Her family is from China and during visits there, she has seen the pollution in Beijing compared to other cities that use sustainable energy.
Nuclear energy, she said, “is really good for the environment and we want to protect the environment as well.”
It’s a subject Li plans to continue studying as she pursues a career in mechanical engineering at MIT.
She said she is proud that her hometown is pursuing nuclear energy, too, with its Carbon Free Power Project. Los Alamos County Council approved in April to enter the licensing period phase 1 of the project with (UAMPS). The Carbon Free Power Project, if fully realized, will provide some of the county’s electric power from a small nuclear reactor facility that would be located in Idaho. The County is subscribed to receive eight megawatts of power from the facility with a cost target of $65 a megawatt hour (MWh).
“I’m real excited,” Li said, adding that she is excited to see support for this technology. “That Los Alamos is taking part in it is really nice,” she said.
Menu
LOS ALAMOS