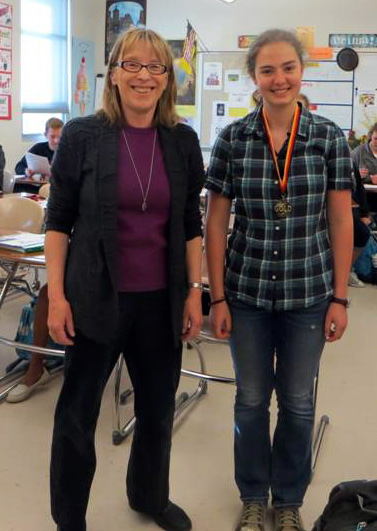 Anita Boshier’s German students are flying high academically and one will even be soaring to new heights, literally.

LAHS sophomore Katie Delgado scored in the 99th percentile on the National German (level 2) exam and was the top nominee for the Study Trip Award.

Wilbur Wang, also a sophomore, scored a 99th percent on the level three exam. He received a medal from the AATG headquarters and the 2015 Austrian Book Award.

Devon McClesky, a junior scored in the 97th percentile for the level two exam and also received a medal from the AATG headquarters and the 2015 Austrian Book Award.

“Wunderbar!” LAHS Principal Debbie Belew-Nyquist said. “We have outstanding students who also have an outstanding teacher in Ms. Boshier. She works hard to enthusiastically design lessons and activities that bring out the best in them through learning German in her classroom.”

A total of 14 students in German 2,3 and 4 scored from the 91st to the 99th percentile of German students nationwide, each receiving a medal for their work.

Boshier said she is extremely proud of her students and when it comes to these exams, she always tells them to take them in their stride and just try their best.

“These tests were hard,” Boshier said. “All are online, all are based on authentic videos for the listening/viewing test and authentic reading.” Boshier does not teach to the test, but must prepare her students for a test geared to the students in the whole nation. Sixty-three students participated during finals, so time is not taken away from curriculum and they have a 90 minute stretch to complete the work.

Boshier has taught German since 1982, arriving as a Hilltopper in 2003, first as an instructional assistant for one year prior to teaching German.

“I love that I am in a small town where people point me out – ‘Hey there is the German teacher,’” Boshier said.

Her parents are very proud of her and that apple didn’t fall far from the tree. Her father was a primary school teacher for 40 years in Germany and her mother a pre-school teacher.

Boshier and the winners recently celebrated all the awards earned from a successful year. Delgado learned that she was indeed selected as the winner of the study abroad to Germany after several weeks of knowing she was the nominee.

“The wait seemed to last forever, but when I found out I had won I was extremely excited,” Delgado said. “I still am!”

Delgado will spend three and a half weeks this summer in Germany living with a host family and attending a local school, with a weeklong excursion to Berlin.

“Learning German is a challenge that has the great reward of actually being able to communicate with people,” she said. “Plus, it has lots of words that are just really fun to say!”