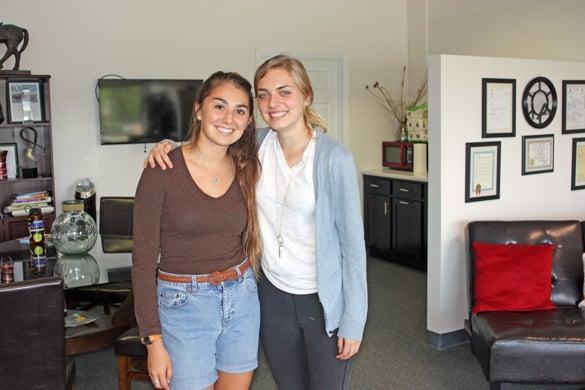 The statistics for plastic bags are startling, according to a presentation the Los Alamos High School Eco Club made to the Environmental Sustainability Board (ESB) during its Aug. 16 meeting.

Club members reported every 10 seconds, 240,000 plastic are being used around the world; furthermore, the average bag is only used for 12 minutes. Plus, just one percent of bags are recycled.

As a result, the Eco Club is offering a solution to this situation. During their presentation to the ESB, club members proposed instituting a 10-cent fee for plastic bags at local businesses.

In addition to making the presentation, Club Co-Presidents Paulina Burnside and Risa Bridge said a petition was circulated during the Bear Festival event Saturday and is available online at Change.org. So far, Bridge said, 350 people have signed the petition.

Besides talking to the ESB, Burnside and Bridge said the hope is to speak to other community boards as well as the County Council. The club has also presented to the Zero Waste sub-committee.

The goal is to have this fee implemented by the County. Burnside said the idea for the fee was inspired by a similar charge in Santa Fe. The club thought it would be good to piggyback off that initiative.

Burnside emphasized the 10-cent charge would be a fee and not a tax.

Bridge said the amount would be a good motivator for people to choose other options other than plastic bags but also not too expensive.

Plastic bags have been a hot-button issue in the past. Several years ago, the idea of whether plastic bags should be banned in the County was highly debated.

Burnside said she thinks a bag fee may be more desirable because it’s “important to have the choice of plastic bags … (it) gives people the opportunity to move in the right direction to be more eco-friendly.”

She added, “It’s just important to get the word out and get people aware of the waste they are leaving around town.”

Bridge said they also want to promote this project because they feel a lot of people will support it.

“We think a lot of people would be into this,” she said.

Since the start of school, between 10 and 15 students have attended Eco Club meetings, which are held during the lunch period Tuesdays in LAHS teacher Elizabeth Bates’ classroom. The mission of the club, Bridge said, is to educate and to get students more interested in the environment as well as how their daily activities impact the environment.