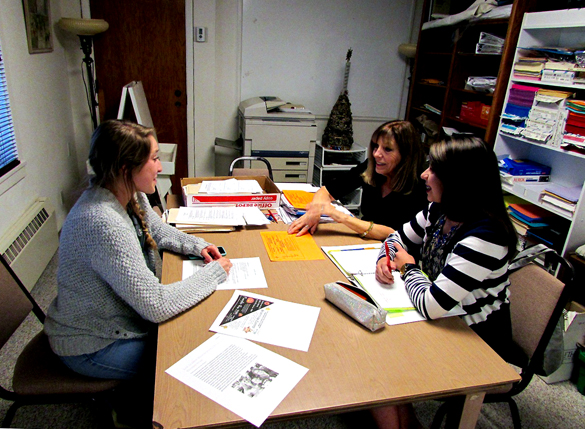 DECA club members and LAHS juniors Victoria Cummins, left, and Melanie Mouton-G. recently met with Los Alamos Arts Council Executive Director Marlane Hamilton to go over details for the girls’ concession stand during this evening‘s arts council’s Pumpkin Glow event. The concession stand is one of many events the girls are holding as part of their service project, Shining Star. Photo by Kirsten Laskey/ladailypost.com

When an anonymous donor at this year’s Relay for Life offered a joy ride in the Classic Air Medical helicopter to a child battling cancer, a spark was ignited. The Distributive Education Clubs of America (DECA) Los Alamos High School chapter seized this spark and turned it into a blaze.

Jesse Miller, 5, and his mother, Mariah, were chosen for the helicopter flight. KOB Eyewitness New 4 and the Los Alamos Daily Post featured stories on Jesse, who is diagnosed with leukemia and in remission, and his mother’s adventure in the air. This caught DECA sponsor Ray Henderson’s attention as well as two of his students, juniors Victoria Cummins and Melanie Moulton-G.

The story inspired the two DECA students to create a service project that offers the Millers some assistance in paying for Jesse’s medical expenses as well as educating the community about this type of cancer. They plan to bring their project to the DECA state competition Feb. 22-24 in Albuquerque and hopefully to the national competition in April.

This project, called Shining Star, is more than just an opportunity to excel in a competition; the two girls are highly motivated to help a young boy and his mother. Cummins said they have really formed a personal relationship with Jesse and his mother.

Cummins and Moulton-G. are organizing a number of events to benefit the Millers including a fundraising dinner, called Be Grateful Dinner. The girls are also selling baked goods during the Los Alamos Arts Council’s Pumpkin Glow event this evening and DECA students are taking part in a “Trick or Donation” program today, during which they are going door-to-door, handing out brochures to inform people about the project, DECA and how they can support the project.

“We are hosting as many events as we can,” Cummins said. Cummins said the project is still in the early stages but already many in the community are jumping in to help out. Tylerr Jones and Jeff Wettleland of the Los Alamos Fire Department called Cummins to find out how the fire department could assist with the project.

Cummins said they offered to host a car wash in November and a birthday party for Jesse, who turns 6 years old next month. Additionally, the fire department is assisting with finding advertisers and sponsors for the project.

Cummins said the department’s help is invaluable. “They just jumped right into it,” she said. “It was the turning point in our project.”

Moulton-G. agreed. “They have been so helpful.”

Henderson said he is impressed by how the service project continues to grow. “Community is about giving back,” he said. Being a part of a project like this, Henderson added, is a “win-win for everybody.” Cummins said the project is more than just a chance to be successful in competition “it’s about learning and growing as an individual.”

When the girls present their project to judges at the state competition, there are several things they will need to include such as a memorized speech, a paper and a presentation board. Henderson said the deadline to complete the paper is Dec. 18.

Shining Star is not the only DECA project in the works. Henderson pointed out his students are working on several projects that address creative marketing, entrepreneurial promotion and financial literacy.

They are also teaming up with several entities in town such as Los Alamos National Bank and the Bradbury Science Museum.

The purpose behind the club is to prepare young people to become leaders and entrepreneurs in the fields of marketing, finance, hospitality and management. The LAHS chapter has 86 members. Henderson said, “It really develops your skills,” not just job skills but also self esteem and confidence.

As Shining Star continues to unfold, Cummins encourages everyone to get involved. Getting the community together, she said, “that’s what excites me the most.”