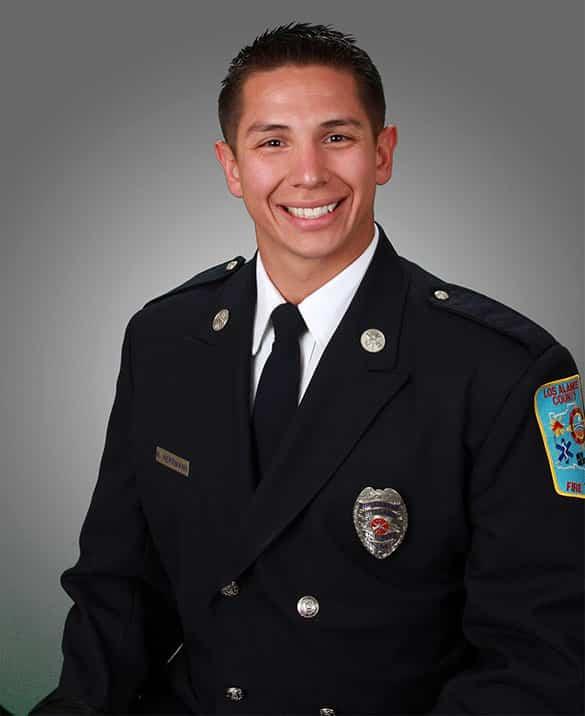 The Los Alamos Fire Department is sad to announce the passing of former Firefighter and US Marine Manfred “Fred” Herrmann. Manfred worked with the LAFD from 2008-2015. During his time with LAFD Manfred served on the Honor Guard, Technical Rescue and Hazmat teams. Manfred also assisted with instructing during academies.

Manfred was known for his quick wit and quicker smile. He had an air about him that made you feel like you were family. He will be forever missed and the Los Alamos Fire Department will remember him fondly. He was a friend to all and we thank him for his service and friendship.

Manfred “Fred” Johannes Herrmann, passed away May 27 at the age of 33. He was born April 4, 1985 in Albuquerque to Michael Herrmann and Anna Vigil. He was the namesake of his paternal grandfather. He was a beloved father, son, brother, grandson, uncle, nephew and friend.

Fred was a man who loved his family and friends. He loved his son, Benjamin, more than anything. He was a man who was always looking for ways to help those around him. He was a giver, a healer and a peace-maker. He was a protector and a helper. Fred also had an ornery side, as most can attest to. He was a jokester with the best intentions and on occasion was known to cause a little trouble. He had a unique sense of humor and was always able to make people laugh or smile.

Since a young age, Fred had a servant’s heart. At 19 years old, Fred joined the United States Marine Corp. He served in the Marines for eight years and was deployed for one tour in Iraq in 2007. He then went on to serve his community as a Firefighter/EMS with the Los Alamos County Fire Department. In his last few years, Fred worked in the family business with his father and brothers at VAMCO.

Fred loved spending time with his son Ben; together they enjoyed nerf gun wars, reading comics, watching movies, playing video games, and long boarding. He enjoyed super hero movies, working out, fighting, hiking, and off-roading. Fred’s dog, Mona, was also a constant companion through many adventures. Fred was a talented and creative man — he had a way with words and made beautiful artistic tributes with his many skills.

Fred was a friend to all. He was a bright light, gone too soon. He is and will always be greatly loved and missed by his family and all who knew him.

While flowers are welcome, the family prefers that contributions be sent to any of the following organizations in remembrance of Fred, and to help those who carry the same burdens that Fred did: Suicide Prevention Lifeline, Paws and Stripes and Wounded Warrior Project

If you feel led to do so, Fred’s family has set up a “Go Fund Me” account for Fred’s son, Benjamin Herrmann. While no monetary value can replace Ben’s father, we would like to help him be financially set up in the future, in the way that Fred would have wanted. For more information, visit https://www.gofundme.com/FredHerrmannMemorial.