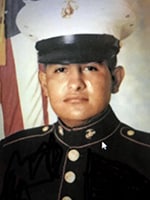 The Los Alamos Fire Department is sad to announce the passing of Patrick Herrera who served the LAFD for 17 years.

Patrick Raymond Herrera, 67, was born March 17, 1951 in Espanola and went to be with our Lord June 25. He lived his life to the fullest. He served in Vietnam as a Corporal with The United States Marine Corp 2nd Battalion, 1st Marine Division. He received a National Defense Service Medal, Expert Badge for M-14 rifle and a Good Conduct Medal. Patrick then served with the United States Coast Guard. He also worked for the Los Alamos National Laboratory as an electrician tech for 14 years.

Patrick worked for the Los Alamos Fire Department for 17 years and retired as a Captain. Following his retirement from LAFD he returned to work as a heavy equipment operator for the Department of Transportation before retiring again. He was a racehorse owner and trainer. He loved to work on cars, go fishing, hunting and spending time with family. He had a big heart and was always there if you needed him.