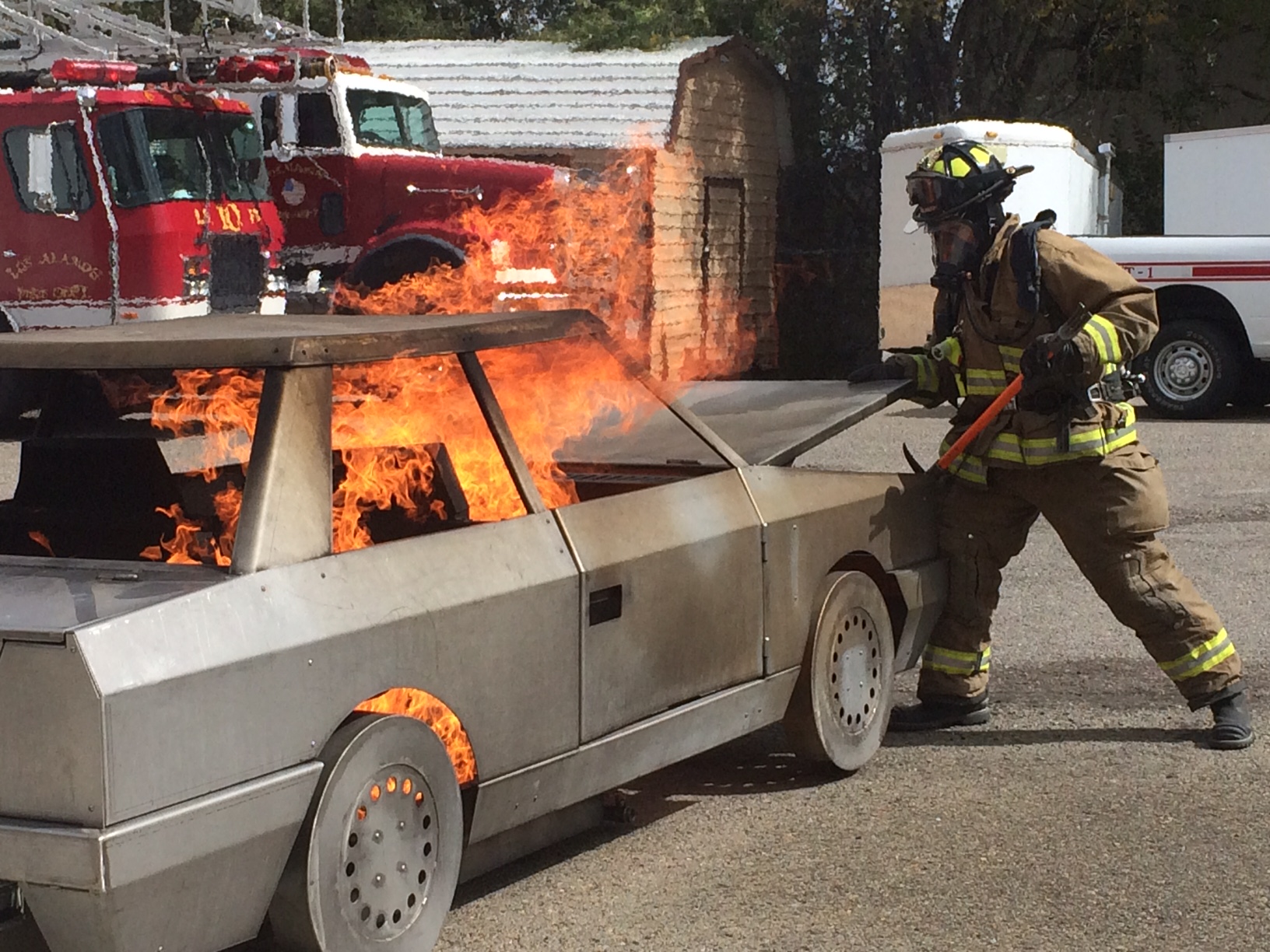 Los Alamos Fire Department Driver-Engineer Gregg Hecathorn opens the hood on the Department’s burn car prop while demonstrating how firefighters extinguish vehicle fires during a training demonstration Monday for the community. Hecathorn normally drives and runs the truck’s pump panel but opted to ‘play’ a little. He is a member of the LAFD Firefighter Combat Challenge Team. Photo by Maire O’Neill/ladailypost.com 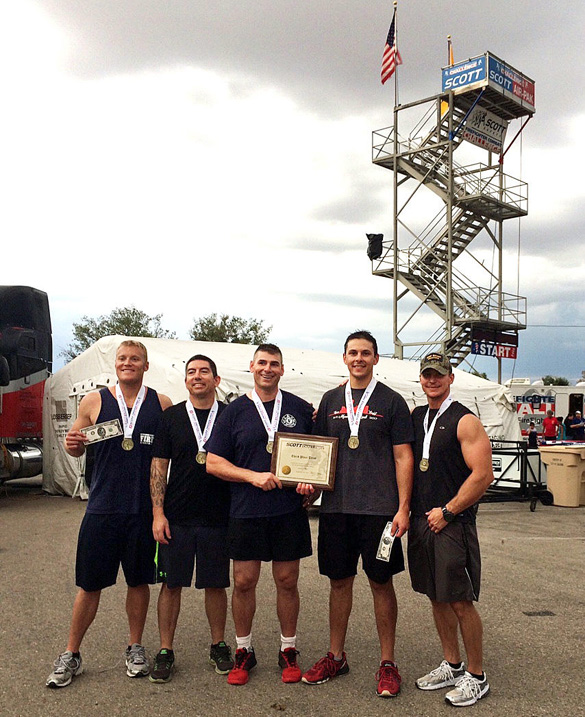 It has been called “The Toughest Two Minutes in Sports” but to the five-man team from Los Alamos Fire Department that participates in the Firefighter Combat Challenge, it has the potential to be the difference between life and death in their regular day’s work.

Firefighters David Apodaca, John Bialy, Kevin Kamplain, Driver-Engineer Gregg Hecathorn and Chief Troy Hughes have been competing since 2015 in the Challenge and have traveled to Colorado, Nebraska, Indiana and Carlsbad to participate in the grueling physical competition which encourages firefighter fitness and demonstrates the profession’s rigors to the public.

Apodaca, Bialy, Hecathorn and Kamplain demonstrated the five elements of the Challenge Monday during a fire training demonstration at LAFD Station 2 on DP Road. The team also fired up the Department’s burn car prop and showed how LAFD extinguishes vehicle fires much to the delight of those present.

The Firefighter Combat Challenge simulates the demands of a real life firefighting situation, so competitors compete against the clock and each other in climbing stairs, hoisting, chopping, dragging hoses and rescuing a life-sized 175-lb victim all while wearing full bunker gear. Amazingly, after only two years of competition, the team members are quickly heading towards their individual goals of qualifying for the “Lion’s Den” which consist of firefighter athletes who post times that place them in the top layer of competition. Team members individually are only seconds away from meeting the criteria for joining the elite group.

In the first section of the relay event, which the team demonstrated Monday, Apodaca runs the steps to the top of the tower in full National Fire Protection Association gear while carrying a 42-lb high-rise pack which contains 4-inch hose. The handrails may be used in climbing the tower and multiple steps can be taken at a time on the  way up. On reaching the top, Apodaca places the pack in a container and with leg muscles burning begins to use his upper-body to hoist a donut roll containing 42 lbs of hose and 7 lbs of rope to the railing at the top of the tower.

At this point, Bialy grabs the baton and races down the stairs, hitting every step as he goes. At the bottom, he takes a 9-lb mallet, jumps onto the Keiser forceable entry machine and drives a 160-lb sled five feet to the other side of the machine with the mallet, while all the time utilizing those upper-body muscles while bent over and putting strain on his legs. Then Bialy runs 100 feet slalom course through delineators and hands the baton off to Hecathorn.

Hecathorn then grabs 240-lb charged hose, runs it 75 feet and opens the hose bail to show water. He pushes through double doors and sprays down a target, then drops the hose and hands the baton off to Williams.

To finish, Williams lifts a 175-lb mannequin-victim and drags it backwards for 106 feet without falling. Carrying the mannequin is not allowed. In competition magnets are placed in the mannequin’s heels and when the magnets cross the finish line, the time is recorded.

Apodaca said the Challenge is a great family event. He said the being on the team is all about camaraderie and physical fitness but that the members have taken it on as a passion.

“It’s good public relations for the Department when people can see what we do physically in the course of our job,” he said. “Being a firefighter is like being an industrial athlete. It’s fun to compete and push yourself but we all encourage each other as well.”

Apodaca said all firefighters are required to take a criterion task test (CTT) when they hire on with the Department and each year after that no matter how many years they have been with the Department. He said the CTT for LAPD Station 2 was designed to that it mirrors the Challenge competition. Dr. Paul Davis, an exercise physiologist and former firefighter himself, founded the Challenge in 1991. He researched and assisted with the LAPD’s CTT. Apodaca said most professional fire departments have something similar.

Chief Hughes told the Daily Post that the Challenge is a great event that brings together firefighters from all over the world.

“The camaraderie is second to none. Recently, a firefighter from my former department in Nebraska had his house burn down and  firefighters from all over the United States who knew him from the Challenge started a Go Fund Me page that raised money to help him and his family get back on their feet,” he said.

Chief Hughes said the event teaches teamwork and great sportsmanship among the competitors while stressing competing against yourself.

“Personal best times mean more than first or second place. The Challenge tests our people doing tasks very similar to what they would use during an emergency response,” he said.

Chief Hughes said he has not competed this year as he has been challenged with completing a Master’s degree in Homeland Security through the Naval Postgraduate Program. He added that he is near the end and will graduate in December.

“I plan to get back into the mix and support the team in future events,” he said.

Apodaca said the Department and International Association of Firefighters Local #3279 have sponsored the team by giving them money for entry fees, meals, and travel expenses to compete a couple of times a year.

“The guys that don’t compete have been super supportive. They are glad we are representing LAFD out in the world in a positive way. We are also showing the importance of physical fitness for firefighters. Heart attacks are the leading cause of death for firefighters and physical fitness mitigates the risk of a firefighter dying on or after a call. We want everyone to come home safely every time,” he said.

Apodaca also recognized the support given to the team by spouses, girlfriends and family members. He expressed his gratitude for the support of his wife, Hannah. The couple has a five-year old son and a three-year daughter. 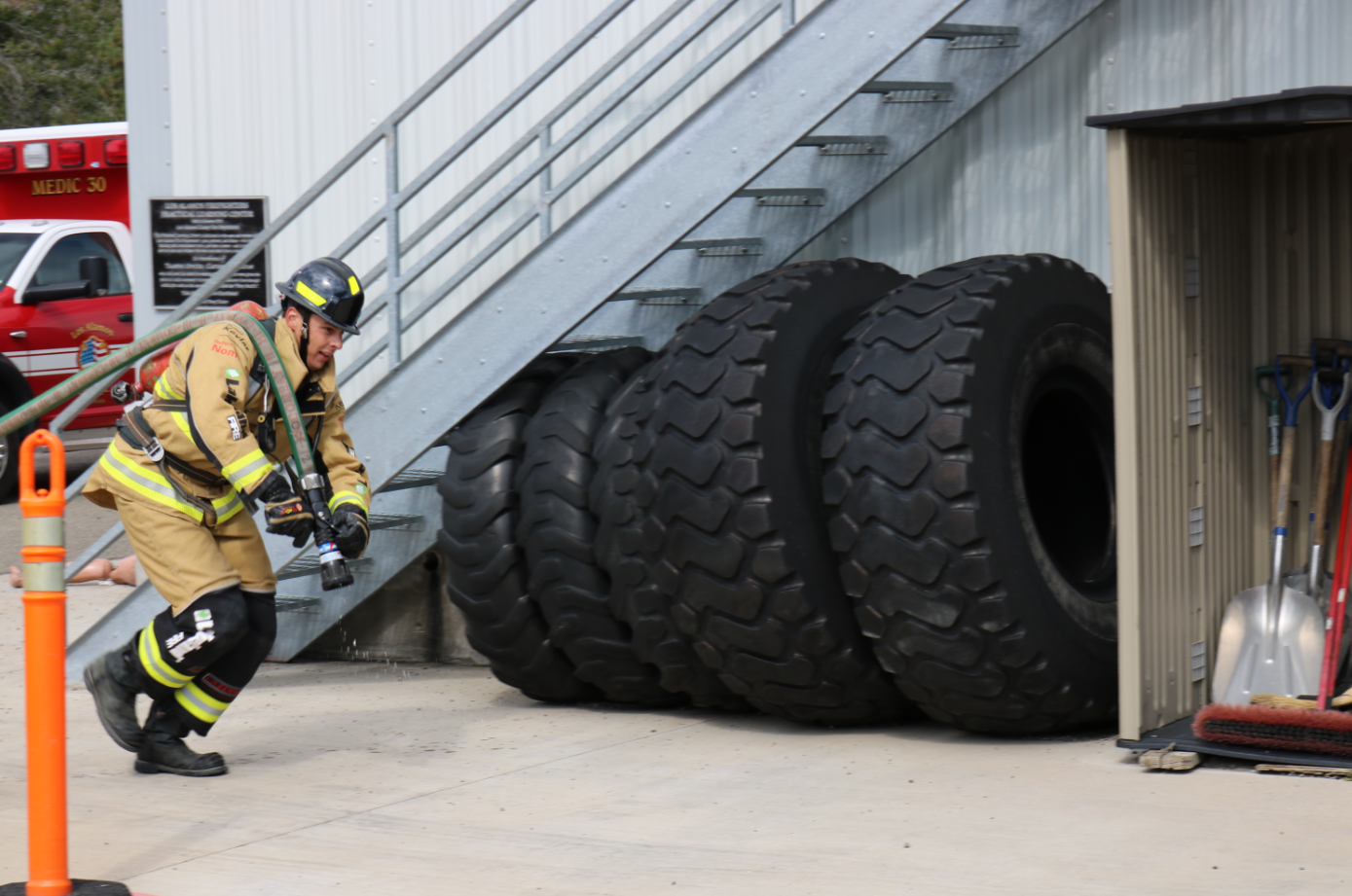 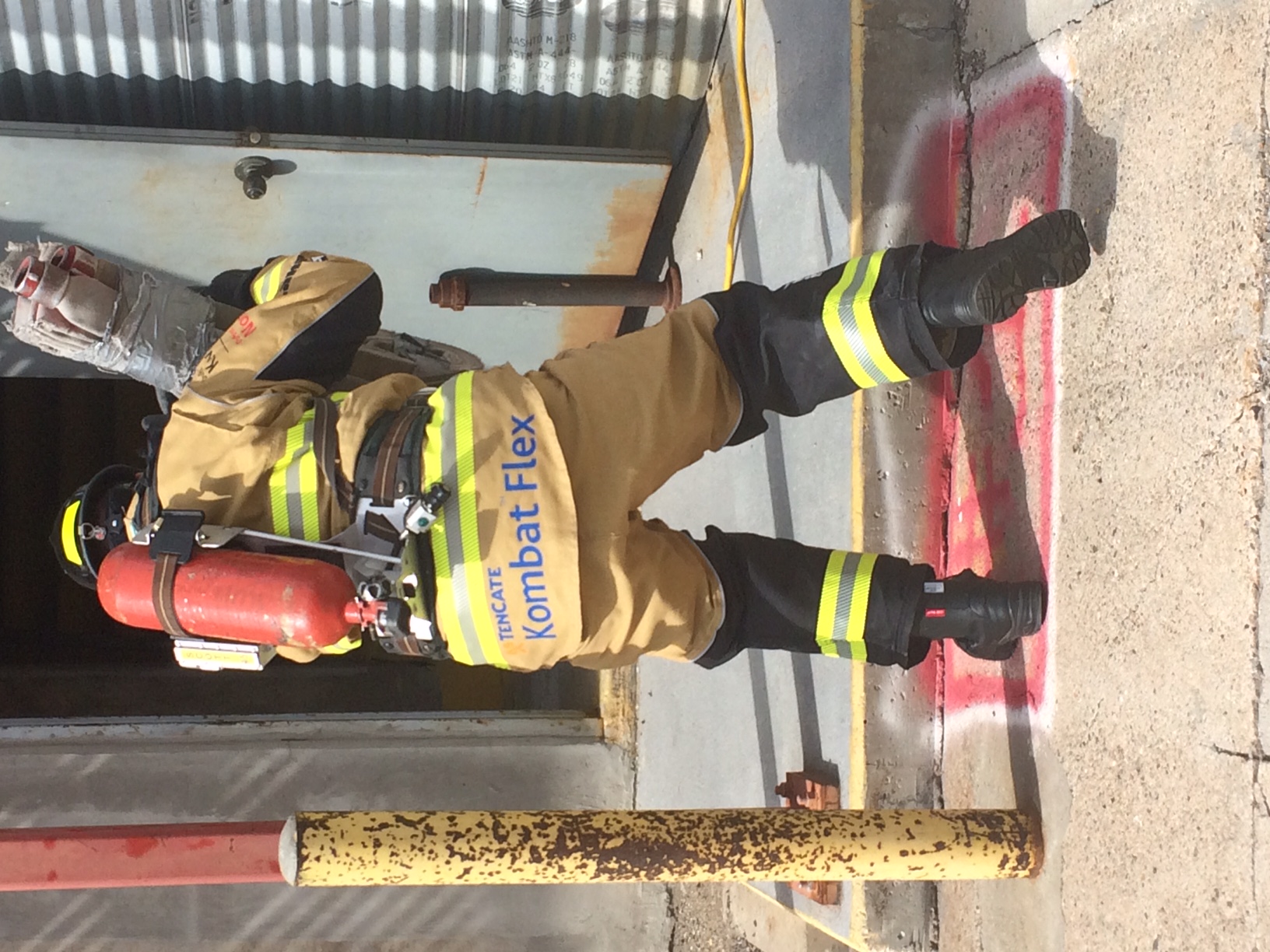 LAFD Driver-Engineer Gregg Hecathorn gets ready to head up the stairs to the top of the tower. Photo by Maire O’Neill/ladailypost.com 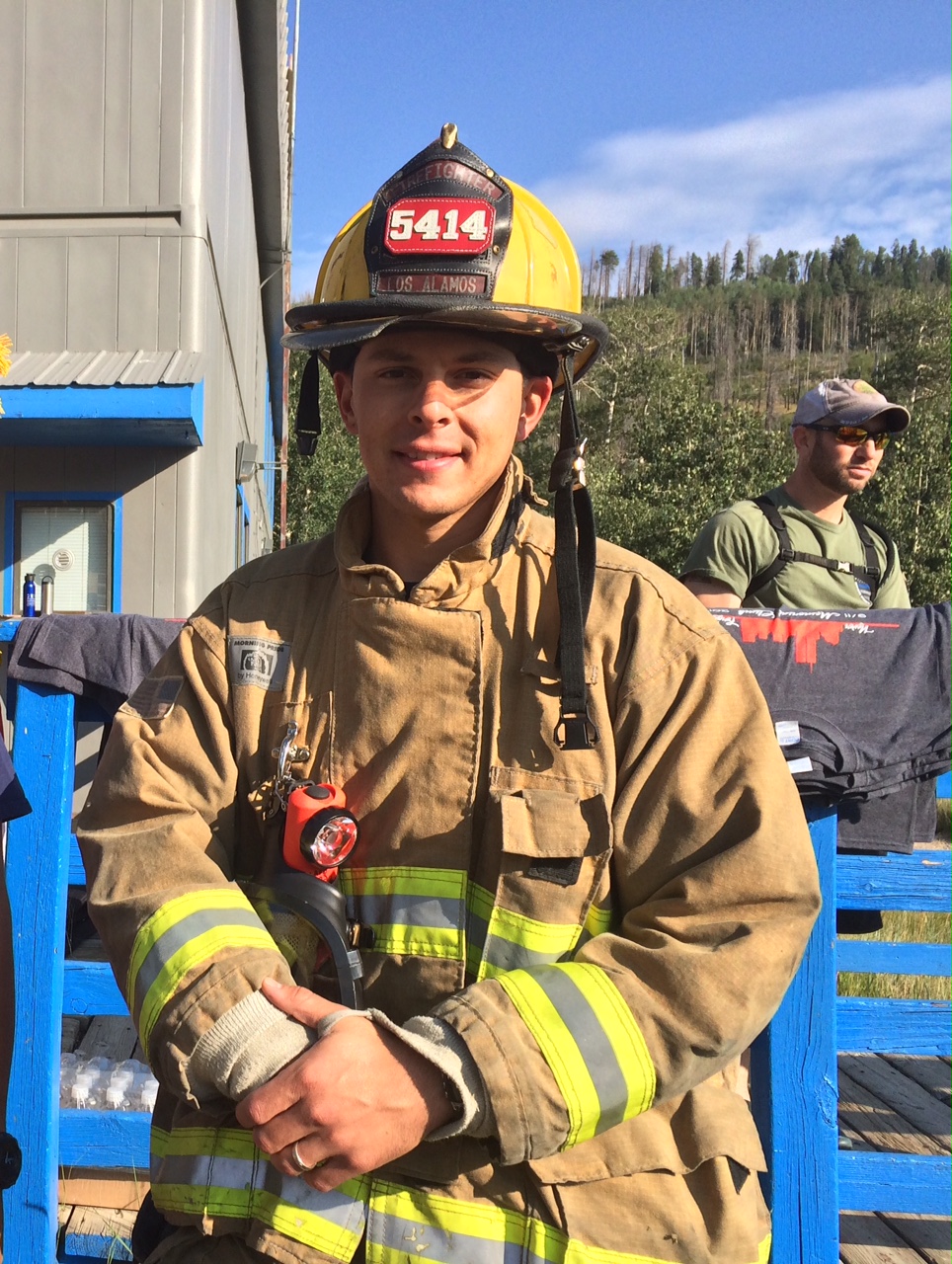 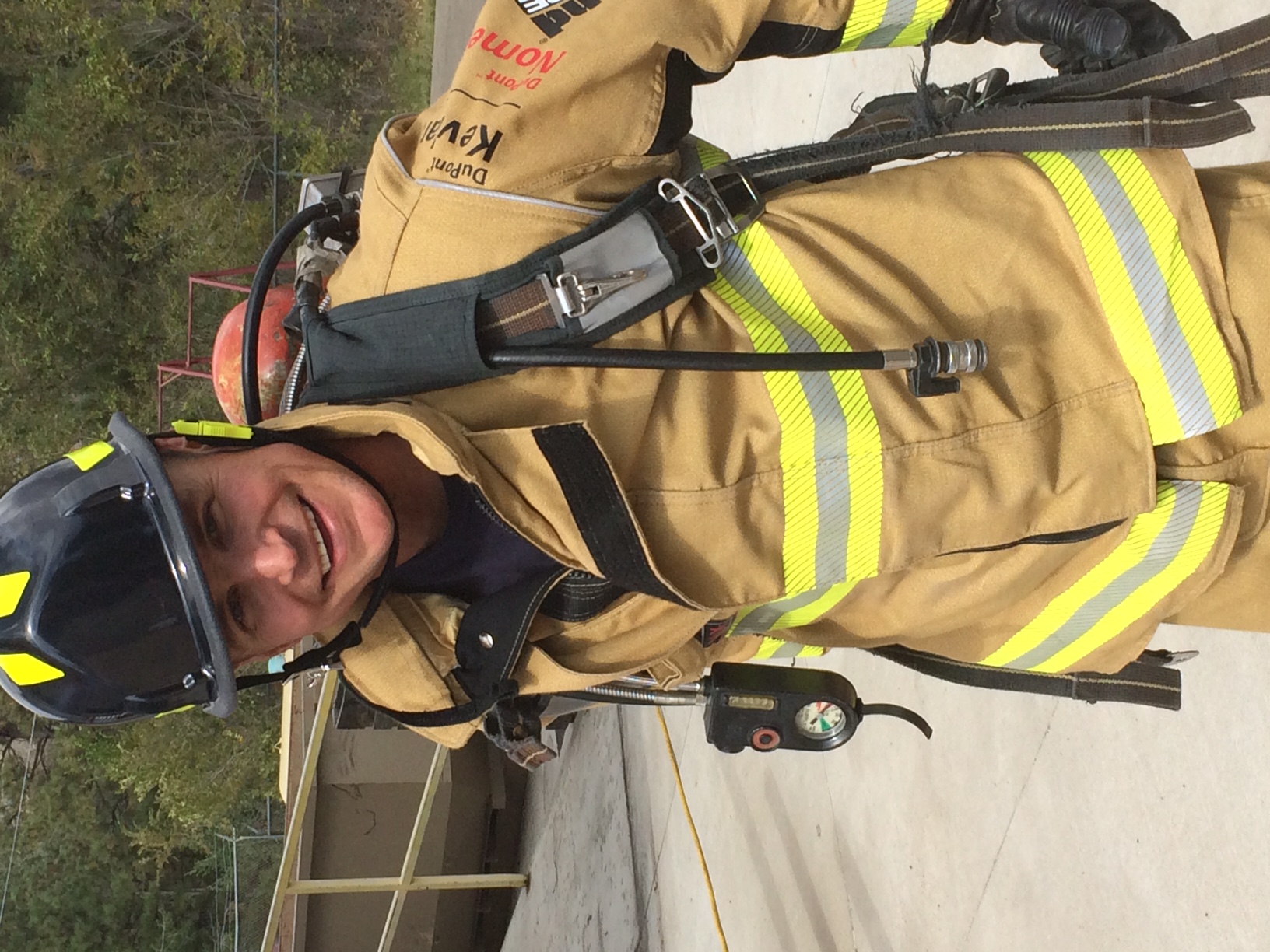 Los Alamos Fire Department Firefighter John Bialy gets his gear ready for his run up the steps. Photo by Maire O’Neill/ladailypost.com 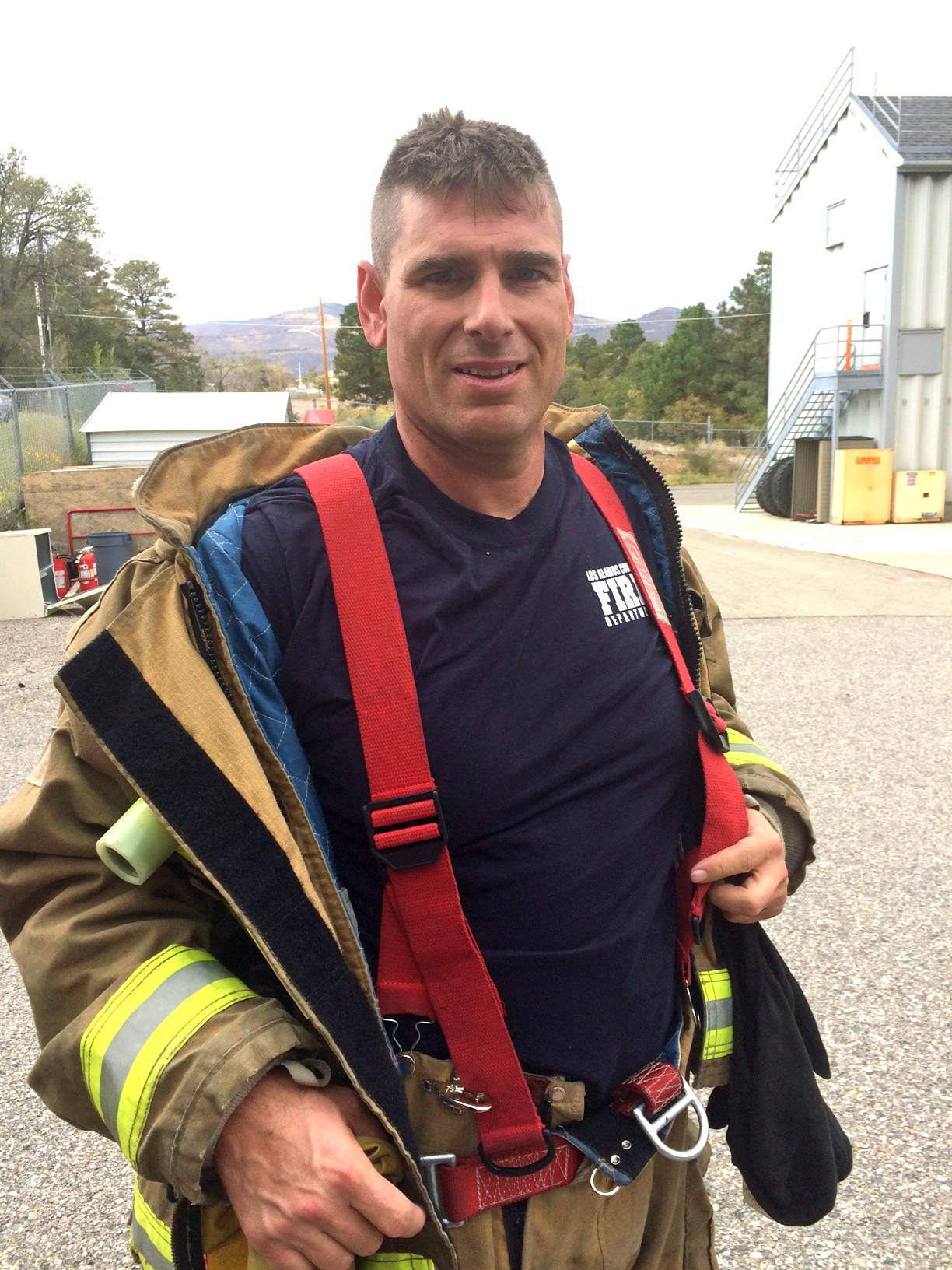 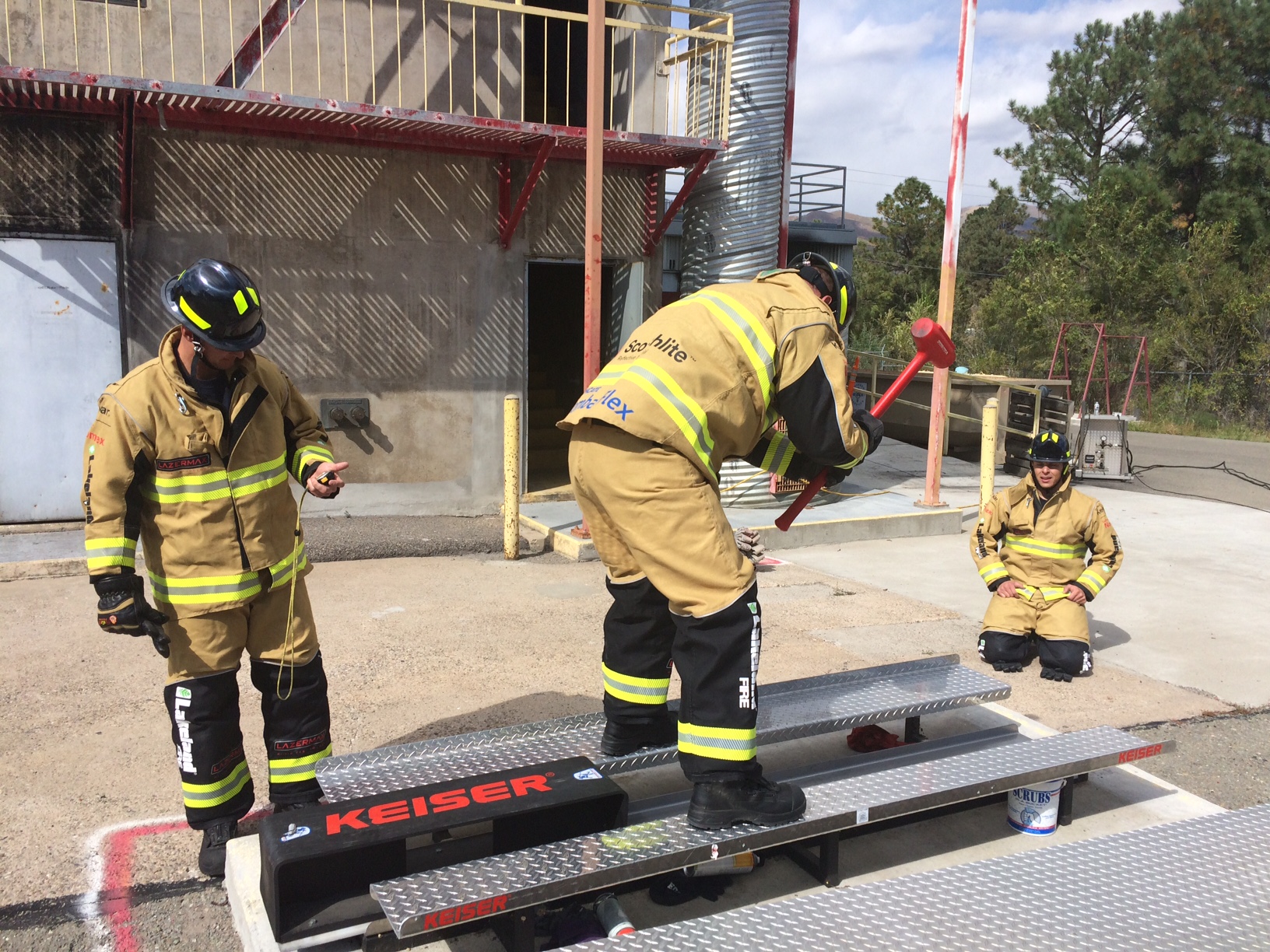 LAFD Driver-Engineer Gregg Hecathorn drives the sled with a 9-lb mallet as Firefighter John Bialy, left, times him and Firefighter David Apodaca, right, cheers him on. Photo by Maire O’Neill/ladailypost.com 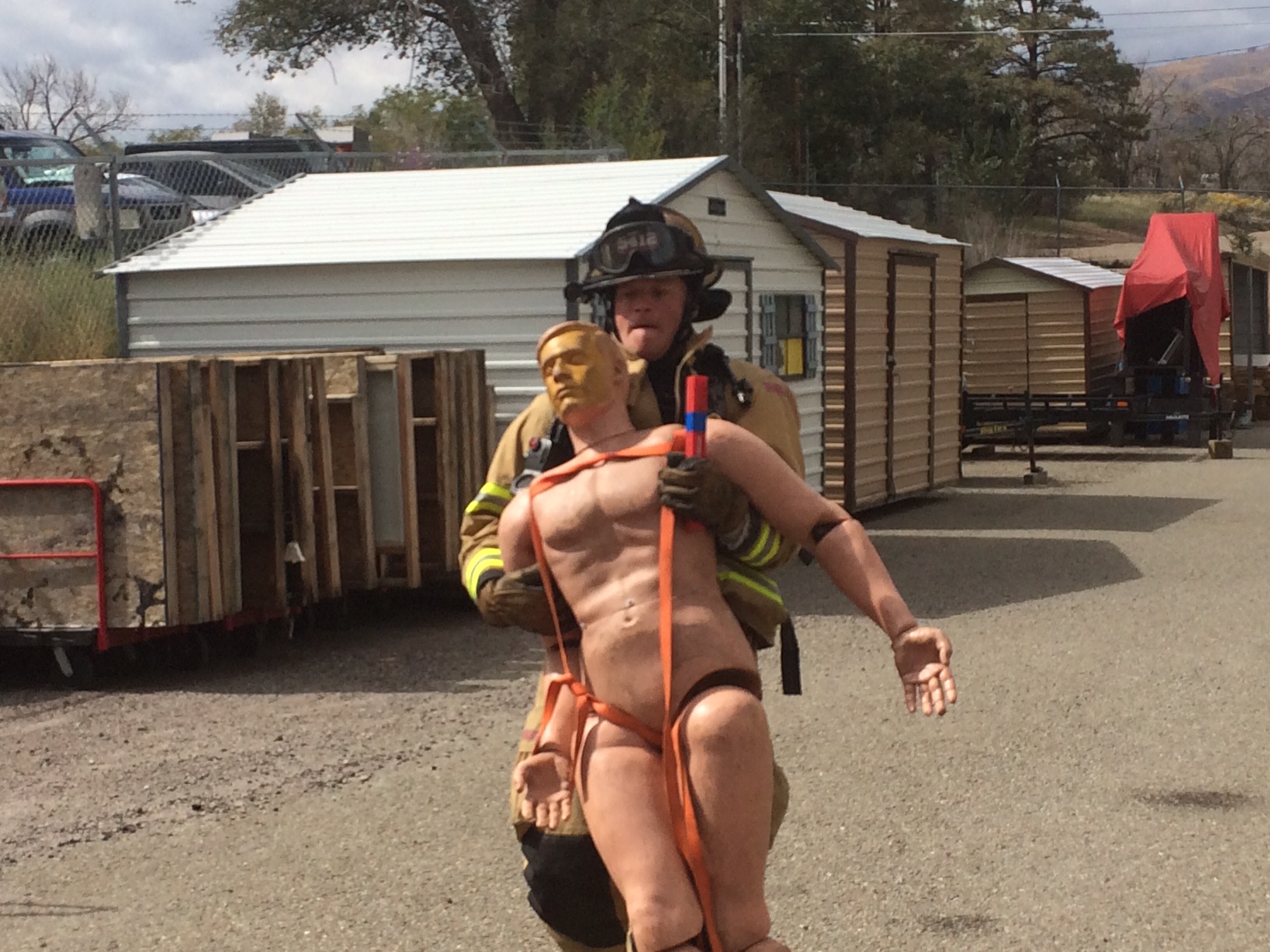 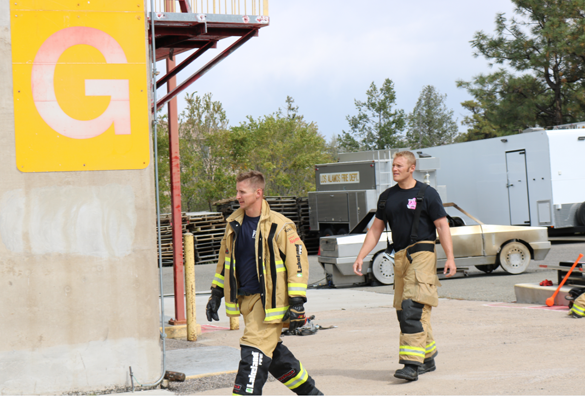