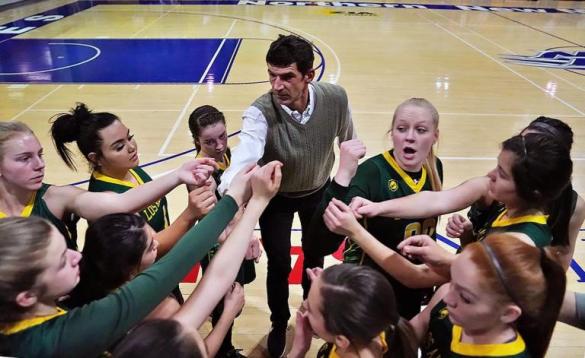 Head Coach Lanse Carter shares a sendoff cheer before the Toppers game against the Lady Sundevils Thursday night in the Northern New Mexico Collage Gymnasium because the Sundevils gym experienced a power failure. The change of gyms was not good for the Sundevils as the Toppers won big 69-58. The Toppers led the contest from tip off to final buzzer. It is always a big win when the Toppers beat the Sundevils. Photo by John McHale/ladailypost.com 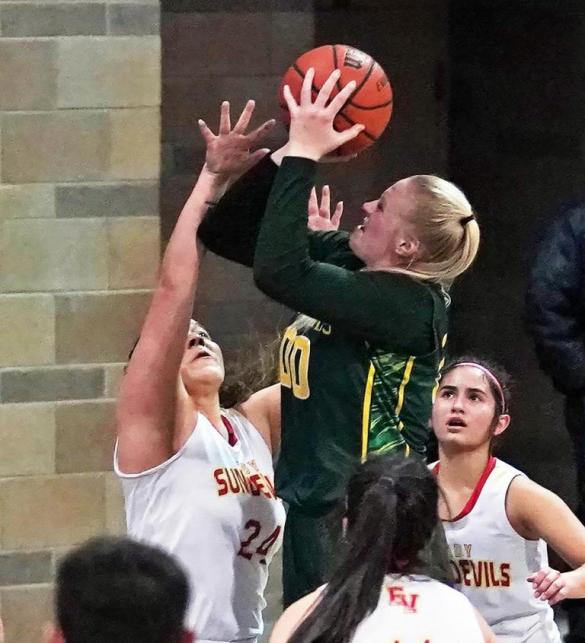 The night belonged to Becca Green as she scored 26 points and dominated both ends of the court under the basket. The Sundevils has no answer for the tall girls. Photo by John McHale/ladailypost.com

The Los Alamos High School girls basketball team ended years of frustration and picked up a key victory in District 2-4A with a 69-59 victory Thursday over Espanola Valley High School at Northern New Mexico College.

The game was scheduled to be played at Edward Medina Gymnasium at Espanola Valley, but electrical problems with a transformer forced the move to Northern.

A good crowd of fans showed up nonetheless and saw the Lady Hilltoppers use a significant height advantage over the Lady Sundevils to dominate the inside. Behind 27 points from post Rebecca Green and 10 more from forward Natalie Gallegos, the Hilltoppers overcame Espanola’s aerial assault and by halftime had taken a nine-point lead.

“We’re playing together,” Los Alamos Coach Lanse Carter said. “They’re looking for each other. Understanding what our strengths are and playing to those strengths.”

Espanola strengths are a pressing defense that creates turnovers and perimeter shooting from beyond the three-point arc. At the start of the game, the Sundevils were on target. Kaylinn Martinez canned a pair of three-pointers and Destiny Valdez sank another as Espanola took a 9-4 lead.

When the three-pointers stopped falling, Los Alamos was able to comeback. Espanola grabbed so few rebounds that a missed shot was like a turnover for the Sundevils. The Hilltoppers ran off seven unanswered points to take an 11-9 lead. A pair of free throws by Jaydyn Padilla tied the score, A basket by Janee Montoya gave Los Alamos a 13-11 lead at the end of the first quarter.

Green dominated on the inside in the second quarter, scoring 13 points. When she’d miss her initial shot, she was often able to grab her own rebound and get another opportunity and sometimes another. Second-and-third chance points helped the Hilltoppers take a 26-15 lead before another three-pointer by Martinez. Despite another Martinez three-pointer, Los Alamos was able to take a 32-23 lead at halftime.

Green had 18 points in the first half. Martinez early matched her, scoring 16 for Espanola.

As dominant as Green was in the paint, she was not the one bringing the ball downcourt for Los Alamos. That crucial job fell to senior Alex Calderon. Her ability to break Espanola’s full court press and then penetrate into the lane was key to the Hilltopper’s success. She either shot or dished off to Green. Even when Calderon’s shots didn’t go in, they ended up being like a pass as Green was more often than not grabbing the rebound.

In the third quarter, Gallegos began to contribute to Los Alamos’ inside game. She scored six points mostly on putbacks. Los Alamos took a 42-30 lead after Gallegos’ third basket. After that, Green took over, scoring six more points in the third quarter.

Espanola was able to make a small run near the end of the third quarter when Coach Carter gave Calderon a much-needed rest. That led to some turnovers that the Sundevils converted into layups by Kaylee Chavez. Espanola managed to cut Los Alamos’ lead to 48-40, but a basket by Green pushed the lead back to double digits and the Hilltoppers led 52-42 heading into the fourth quarter.

The finish gasp for Espanola came when Chavez hit a three-pointer and drew a foul. She missed the ensuing free throw, but came up with a turnover on the next possession. She fired up another three that could have cut the lead down to single digits, but this one failed to fall. When Calderon banked in a runner and drew a foul, that gave the Hilltoppers a 69-55 lead, there simply wasn’t enough time left for the Sundevils to close the gap. Los Alamos could celebrate a victory over Espanola that was years in the making.

The victory was crucial for the Hilltoppers, who improved to 2-0 in District 2-4A. Thanks to a brutal pre-district schedule, Los Alamos is just 8-12 overall. They have to make their mark in district competition to advance to postseason play. Their next game was against Taos High School, which has struggled in District 2-4A and has yet to record a district win. The Lady Tigers are just 2-15 on the season. Coach Carter is not overlooking the Tigers.

“Sometimes the toughest game is the next game after a big win,” Coach Carter said. “We gotta stay even keel. I just want to focus on us getting better.”

The Hilltoppers will have a showdown Feb. 5 at Pojoaque Valley High School. The Elkettes are undefeated 3-0 in District 2-4A and 18-3 overall. 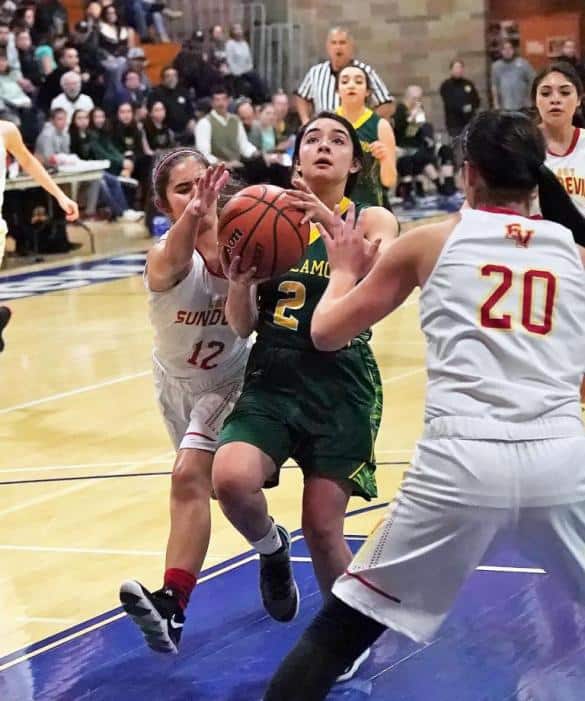 Alex Calderon had little trouble penetrating the Sundevil’s defense as she powered her way through the coverage on her way to the Topper basket scoring 16 points. Photo by John McHale/ladailypost.com

Natalie Gallegos was a force under the baskets all night. She scored 10 points for the night. Photo by John McHale/ladailypost.com 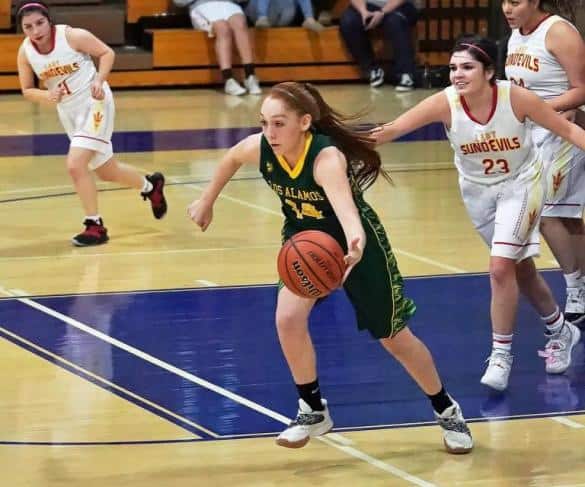 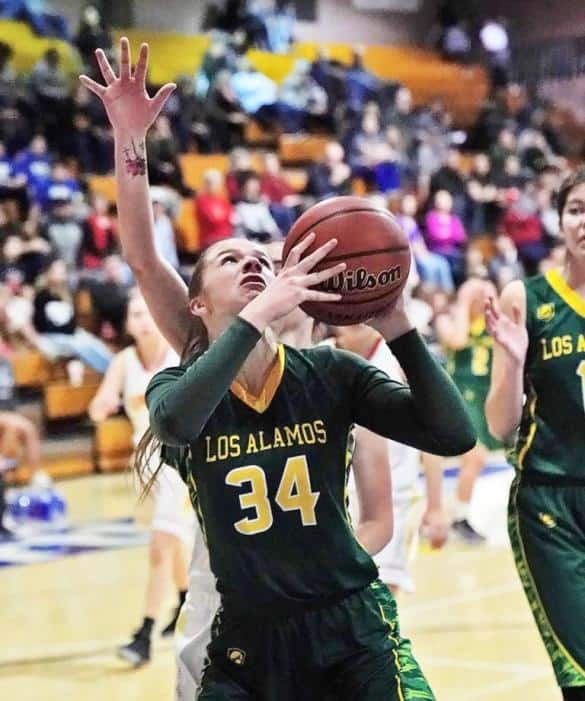 Michaela Gonzales hits for two points of her five for the night. Photo by John McHale/ladailypost.com 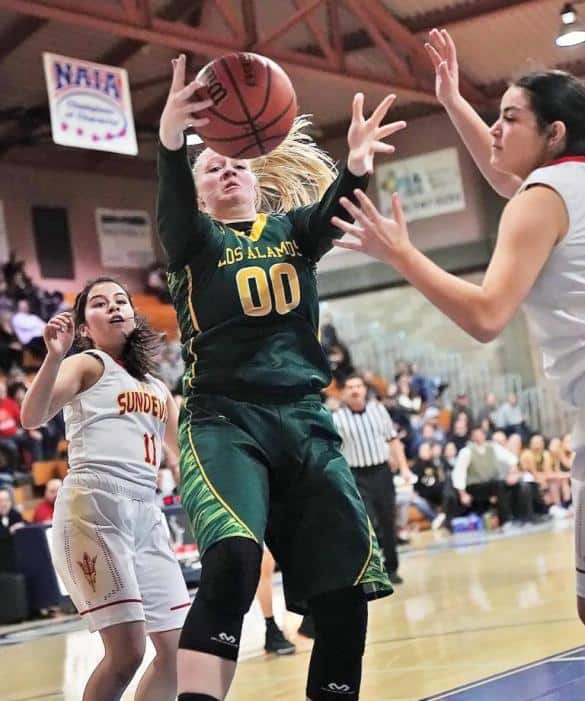 Becca Green gathers in a loose ball under the Topper basket. Photo by John McHale/ladailypost.com 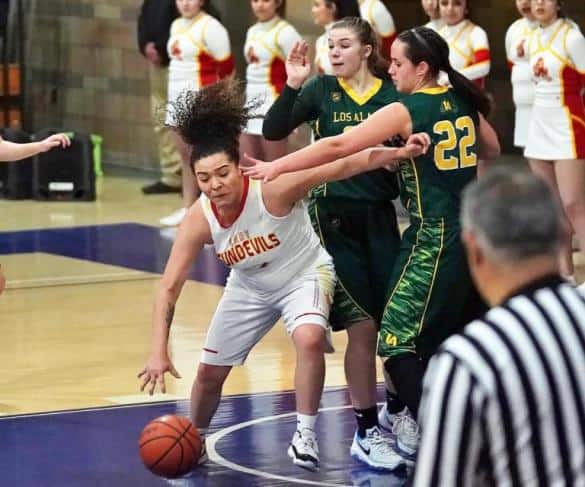 The Topper defense was at full power and kept the Sundevils under control throughout the contest. Mattie Ruminer and Michaela Gonzales closely guard Jaylynn Padilla. Photo by John McHale/ladailypost.com