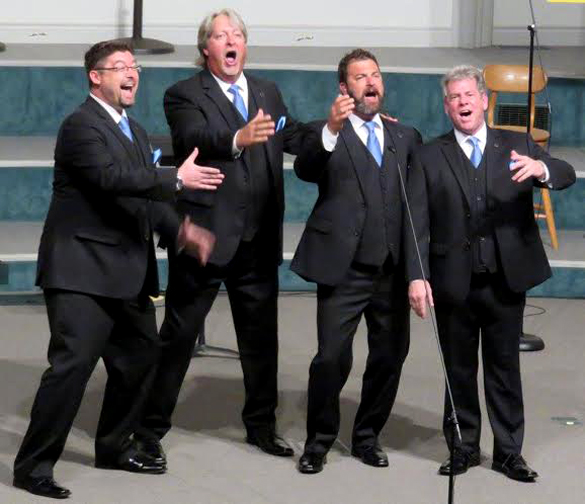 The Lads of Enchantment. Courtesy photo
LOE News:
The Lads of Enchantment (LOE) will present its 2015 Annual Barbershop Show, “Journey Across the USA” at the United Church of Los Alamos on the nights of Friday, Oct. 23 and Saturday, Oct. 24.
In addition to the Lads of Enchantment Chorus and Quartets, the 2015 Annual Show will feature Special Guest Performer, Sterling Quartet, the 2002 Southwest District Quartet Champion and a four-time quarter-finalist at the Barbershop Harmony Society’s (BHS) Annual International Quartet Competition.
“Journey Across the USA”, is produced and directed by LOE Chorus Director and LOE charter member, Maurice Sheppard, and it will be narrated by the LOE’s first Chorus Director, Stan Bennett.
The LOE chorus and quartets will set the mood in song as the show journeys to diverse sections of the USA.
The LOE will sing a varied selection of favorite and new music, including “Sound Celebration”, “Home on the Range”, “River of no Return”, “Shenandoah”, “Ebbtide”, “Under the Boardwalk”, “Chattanooga Choo Choo”, “Yes Sir, That’s my Baby”, “I’ll Fly Away” and “God Bless America”.
The LOE’s featured Guest Quartet, Sterling, is a versatile, veteran performing group from Texas in the Southwest District of the BHS.
Sterling was founded during the 1990’s and, with occasional personnel changes from a core group of performers, Sterling has maintained a consistent sound and quality for over 20 years.
Sterling was the Southwest District Novice Quartet Champion in 1996, and it was the 2002 Southwest District Quartet Champion in open competition.
Subsequently, Sterling was a four-time international quarter-finalist in the BHS annual international competition. The quartet has sung throughout the USA, in Canada, and in Europe, and it has produced two CD’s.
The current iteration of Sterling features three of its founding members – Todd Reavis on lead, Ross Larrison on bass ( a really big-sounding bass), Randy Fly on tenor – and its second, fourth, and now sixth Baritone singer, Justin Oxley.
Some LOE members have seen Sterling perform at BHS workshops. The group is comfortable with themselves and with their audience, and the LOE is looking forward to having them perform here in Los Alamos audience. Links to preview Sterling can be found on the LOE website.
Both performances begin at 7:30 p.m.
On Friday night, there will be an “Afterglow” at nearby Graves Hall in the United Church complex following the show.
The Afterglow entails a snack and additional singing for a modest fee of $5.00. Advance tickets ($15; $5 for students) may be purchased at CB Fox or from chorus members.
Menu
Los Alamos
54°
Fair
6:55am4:51pm MST
Feels like: 54°F
Wind: 0mph SSE
Humidity: 23%
Pressure: 30.36"Hg
UV index: 0
MonTueWed
59/36°F
59/36°F
59/36°F
Weather forecast Los Alamos, New Mexico ▸