Laboratory Scholarship Winner Uses Leadership To Give Back To Others 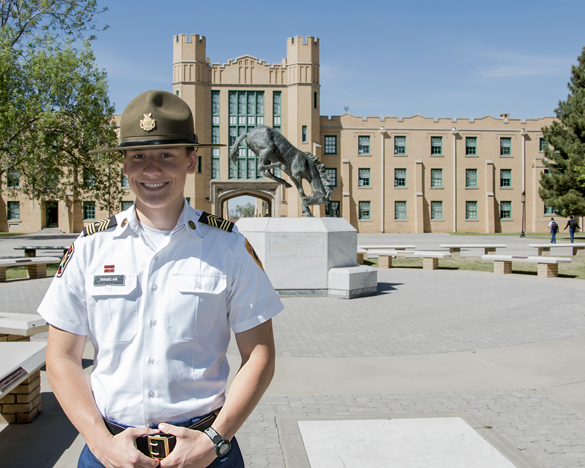 Solomon Sindelar in uniform on the New Mexico Military Institute campus. Courtesy/New Mexico Military Institute
COMMUNITY News:
Growing up in Cerrillos, NM, life for Solomon Sindelar was anything but typical. The small town located on the Turquoise Trail south of Santa Fe is known for its rich mining history, dirt roads, and old storefronts reminiscent of the Wild West.
The rural quality of life appealed to Solomon’s parents when they relocated from Colorado to raise their family in an off-the- grid home and start a solar electric company. Solomon was encouraged to be a free spirit through home schooling and personal exploration, but says his early education lacked structure.
In seventh grade, he started to attend the Academy for Technology and the Classics (ATC), a Santa Fe charter school that caters to a variety of learning styles and promotes values of respect, integrity, and responsibility. At first, the school and its more structured environment were a good fit and Solomon began to excel. But then as a Freshman he grew bored and looked for a change.
“I wasn’t academically challenged and felt restricted by the daily routine and the long commute to school,” he said. “The monotony really got to me.”
After meeting a student who attended the New Mexico Military Institute and doing research online, Solomon considered that NMMI’s disciplined lifestyle and
structured education might by the change he was seeking. The idea of military boarding school was “a hard sell” to his parents, but they recognized his potential and supported his decision.
Solomon began his sophomore year at NMMI in Roswell. The transition to the new military and school lifestyle were challenging for Solomon. It was a shock to adapt to the intense academic focus, lack of freedom, regimented schedule, and even the haircut. He thought he had made a mistake and considered heading home. With some tough love from his mother to stick it out and his own commitment to do his best, Solomon not only adapted, he
thrived.
“I went from not really focusing on anything to completely throwing myself into everything. I wanted to rise to a certain level and apply myself.” He ended his first semester with a 4.0 GPA, which set his new personal standard of excellence.
Solomon’s role as a leader emerged. He achieved the rank of First Sergeant in his troop, a position that required him to teach other cadets discipline, lead formations, enforce standards, and support others in academics and personal life.
He also worked as a ropes course facilitator, guiding cadets and civilians through high and low course events and military scenarios for team building and
overcoming fears.
“Many cadets first doubt themselves, I know I did. I help to provide a counseling ear, balance, and advice while leading and enforcing discipline. It’s rewarding to see cadets accomplishing their goals—earning a desired grade, meeting a physical challenge, getting accepted into college.”
Solomon has challenged himself through a variety of academic courses, from microeconomics to criminal justice, physics, and calculus. He is ranked first in his academic class and tutors cadets through the National Honor Society. He’s grateful for his liberal upbringing, which provided the openness to explore and try new things. The military school has given him the drive and focus to pursue his interests.
“I want to use my discipline and experiences to uncover a path through which I can explore ways to give back to others…I feel that it’s my duty.”
With support of a $20,000 Gold scholarship from the Los Alamos Employees’ Scholarship Fund, Solomon will attend the University of New Mexico. He plans on taking a range of courses and continuing to further challenge himself and discover his interests.
Although undecided, he is considering a career in the medical field. His interest in oncology is inspired by both of his parents’ struggles with cancer. After college, he is also considering military service.
“I want to figure out a way to give back to New Mexico, or NMMI, or America. This scholarship gives me the opportunity to gain new experience and go to college without loans. This is not frivolous, I have the opportunity to make a real difference because I care about the outcomes of others.”
Menu
Los Alamos
68°
Clear
5:48am8:23pm MDT
Feels like: 68°F
Wind: 12mph SSW
Humidity: 27%
Pressure: 29.92"Hg
UV index: 0
MonTueWed
93/66°F
90/64°F
91/64°F
Weather forecast Los Alamos, New Mexico ▸