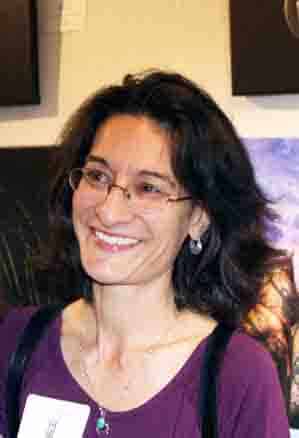 “It was one of those hot summer afternoons,” she writes, “with air made of cobwebs and a glare as sharp as pencils.”

The story’s detective, Track Presius, soon is trying to solve the disappearance of a young woman working for a private genetics lab and is pulled into several seemingly unrelated murders. The science of genetics is central not only to Chimeras’ plot but also to the detective unraveling the mystery’s criminal conduct.

“I wanted to make Track Presius an unusual detective,” Giorgi said. “As a researcher at the Lab I know, for instance, that most of the human genome consists of ancestral genes that have lost their function, and I began to explore the scary idea of what might happen if some of this DNA, which normally is turned off in modern humans, was switched on.”

The result of Giorgi’s musings is a detective with heightened senses of sight and smell.

“Our predator ancestors heavily relied on their visual and olfactory faculties to hunt,” she said “And, using a bit of poetic license, Track Presius regained these abilities after a traumatic childhood event activated some of his old pseudogenes.”

Track Presius’ fictional gene activation makes him a so-called epigenetic chimera, where epigenetic refers to the study of heritable changes that are not caused by changes in the DNA sequence and chimera harks back to the monstrous fire-breathing hybrid creature in Greek mythology.

While Track Presius is a figment of Giorgi’s imagination, epigenetic chimeras are not.

“Scientists have turned mice, for example, into epigenetic chimeras by modifying the proteins that control the mice’s genetic ‘on’ and ‘off’ switches,” she said.

Chimeras is Giorgi’s first murder mystery and has since been followed by Mosaics, another Track Presius story, and Gene Cards, a futuristic thriller that imagines a world without privacy, including genetic privacy.

Although Giorgi loved the creative process of developing Chimeras’ genetic twists and turns, she particularly enjoyed researching Track Presius’ life as a member of the Los Angeles Police Department.

“I grew up in Italy and came to this country as a graduate student in theoretical math. I needed a real police officer to check details in the Chimeras plot and also help me with LAPD lingo and procedures,” Giorgi said. “Luckily, a writer friend introduced me to a retired LAPD cop, Tim Bowen. Tim and I began chatting by email and phone, and I met him in Los Angeles a few months later.”

Bowen took Giorgi under his wings and showed her around.

“Tim gave me a tour of the previous LAPD headquarters in the old Parker Center,” she said, “and then took me to the new Parker Center, the 911 dispatch center, the LAPD Hopper Heliport and the Coroner’s Office. As we walked, he entertained me with police stories and personal anecdotes, most of which included plenty of jokingly recalled swearwords and obscenities and kept me laughing and asking questions.”

One of the stories that Tim Bowen told Giorgi involved a man Bowen and his police partner had stopped for questioning.

“You frisk him,” Bowen murmured to his colleague under his breath.” No way,” his partner whispered back. “I frisked last time, so it’s your turn.”

But despite Bowen’s helpful tutorials Giorgi did not fully master Track Presius’ “voice” until she came across Raymond Chandler’s books.

“I already had given Track a snarky attitude, but what I call Chandler’s ‘sarcasm with a sentimental note’ gave Track the finishing touch,” Giorgi said.