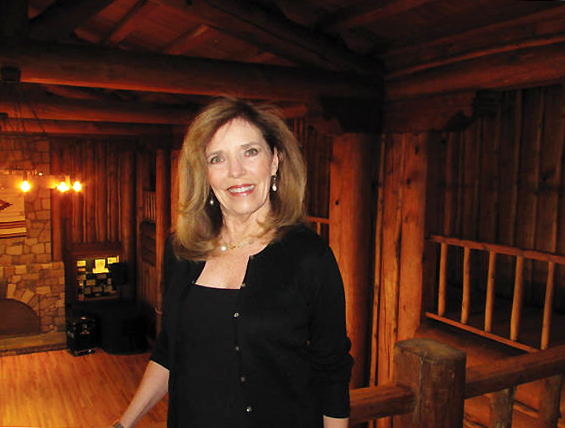 Marlane Hamilton at Fuller Lodge recently has announced her retirement after 16 years. Photo by Kirsten Laskey/ladailypost.com

The Los Alamos Arts Council (LAAC) has made significant contributions to the local arts scene and its long-time executive director, Marlane Hamilton, plays a major role in making these contributions happen.

Hamilton has worked as the LAAC’s executive director for 16 years. She has seen the organization grow, add new programs as well as remove old ones. Hamilton has played an active role in all of them. She has done everything from walking the length of the lawn at Fuller

Lodge to map out a grid for vendor booths for the Spring Arts and Crafts Fair to delivering, washing and gutting pumpkins to be carved for the Pumpkin Glow.

In addition to the organization’s regularly scheduled activities, Hamilton helped bring in a few special ones including the Chinese Golden Dragon Acrobats, Luma Theater of Light and the Earth Harp.

But now Hamilton is hanging up her executive director hat. She will retire at the end of June. The new executive director, Patrick Neher, will take over the position starting July 10. Los Alamos Arts Council Board President Chris Monteith said, “I think that she has provided an

amazing skill set. She is in charge of providing amazing opportunities for our community. So we appreciate everything she has done for us. She has created such wonderful connections with the community.”

Monteith added, “She knows how to build programs that fit the community’s needs for art. She is going to be sorely missed. The Arts Council wishes her the best in her new adventures. We hope we will see her at future events.”

Looking back on her time with the Arts Council, Hamilton emphasizes the organization’s programs are what makes it so special.

Hamilton pointed out a large number of the programs are free, plus, they need the participation from the community to be successful. For instance, the Kite Festival needs people to construct and decorate kites and the Pumpkin Glow needs carved pumpkins for the event to happen.

“We really count on community participation in many of our events,” she said.

Some of these events have become fixtures in the community. Hamilton said she was told that the Pumpkin Glow, one of the Arts Council’s most successful events, is the most photographed event in Los Alamos. Plus, this year the Kite Festival will turn 20 years old. Hamilton said it is

expected that nearly 600 kites will be built during the two, two-hour workshops while another 300 were constructed in different classroom workshops.

“We try to offer a variety of programming,” she said. “We have something for everyone of all ages.”

Hamilton added she feels LAAC has become an important part of the community. She pointed out the Arts Council has been part of the Creative District board. “We also network with many of the arts organizations in town partially through the Arts Forum meetings that we’re bringing back this year.”

“The Arts Council represents the creative side of our scientific community,” Hamilton said. “People are familiar with our events … and many have become popular and an expected tradition over the  years.”

Hamilton has lived in Los Alamos about 20 years. She said she was asked to join the board and when the organization’s office employee quit, she was asked to fill the position. After two years, the board offered Hamilton the executive director position.

“It has been a wonderful journey from my first days with LAAC as office manager to my current role as executive director,” she said.

A number of programs have been added during Hamilton’s tenure. These new programs include the Chalk Walk, Scarecrow Contest and Pumpkin Glow.

Looking the future for LAAC, Hamilton said, “I would like to see it to remain a strong and vibrant organization  providing new and different events to the community along with our current ones. The arts council has been an important part of the Los Alamos community in the last 50 years and now has several new and interesting opportunities as it faces the future.” She also thinks she will be a part of the arts council, in some form. “I’ve been doing events for so long, I will likely be a volunteer sometime in the future,” Hamilton said.

She hopes to travel and visit family, too, along with having more time to continue with ballroom dance classes.

Still, she said, “I will miss all of the wonderful people I’ve worked with and learned to know(including board members, volunteers, colleagues, county staff and business owners) during these past years.”