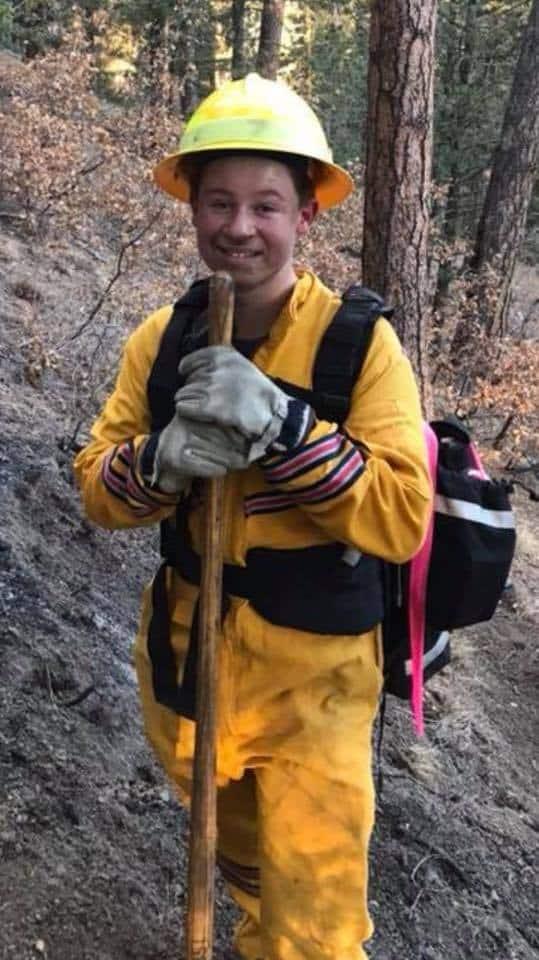 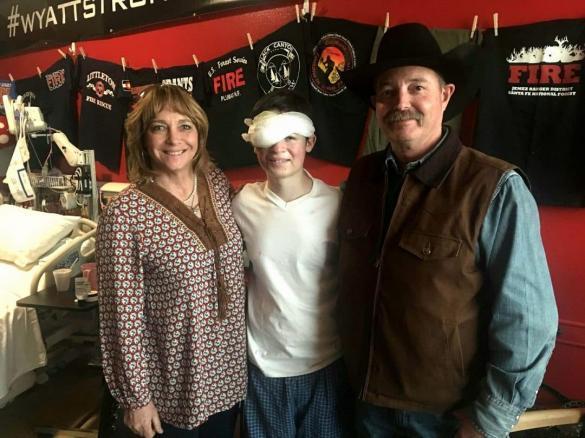 A 14-year-old La Cueva teen has attracted the attention, affection and support of people from across the nation and the world since a tragic accident Dec. 17, which left him facing multiple surgeries and months of hospitalization.

Wyatt Taylor was headed out on his ATV to feed the family’s horses at a remote pasture when the accident happened. He was riding on the side of the road when his ATV hit a rock causing him to lose control of the steering. The ATV rolled down over an embankment and a barbed wire fence and into a ditch.

Wyatt was thrown off and ended up pinned underneath with his face forced against the tire. To make matters worse, the ATV was pinned into the engaged position, which resulted in the tire spinning relentlessly against his face. Family members say he later reported hearing three cars drive by him and realizing that he must not be in view of the road and that it was up to him to save himself.

“We believe he may have been there for more than 30 minutes, fully-conscious, trying to get away from the tire that was tearing at his face, until the engine finally died,” Wyatt’s Aunt Cyndee Weeks told the Los Alamos Daily Post.

Wyatt somehow managed to climb out of the ditch, hike up a hill and make his way to the closest house, about a quarter of a mile away where residents called 911 and he was eventually airlifted to New Mexico Hospital Trauma Center.

Wyatt sustained full-thickness burns down to the bone on the right side of his face from the top of his head to his jawline, with major damage to his right eye and the right side of his nose as well as full-thickness burns to his left hand and arm, Weeks said. He faces months of recovery and several complicated and unique reconstructive surgeries and therapies to restore his face, save his vision and regain the use of his left hand.

Wyatt is a junior firefighter with the all-volunteer La Cueva Fire Department where his father, Lee, is the chief and has been volunteering for more than 22 years. His mother, Michelle is an EMT with the Albuquerque Ambulance Service and volunteer EMS captain for the La Cueva Fire Department. Wyatt recently completed his Wildland Firefighter II training and responded to his first working wildland fire in November.

“His dream is to become a fully-fledged wildland firefighter with the U.S. Forest Service,” Weeks said.

The family has long ties to the area. Lee and Michelle graduated from Los Alamos High School. Lee drives the Jemez route for Fed-Ex in addition to his fire department duties. Wyatt’s grandparents Ginny and Gerry Taylor and Tom and Elaine Brunton live in Los Alamos and both grandfathers retired from Los Alamos National Laboratory. Wyatt has three grown sisters, Courtney, Vanessa and Kirsten.

Weeks said Wyatt’s spirits are good but that he is dealing with a lot of pain. He is at UNM Children’s Hospital and Michelle has taken a leave of absence from her job to be with him constantly. Lee works during the day and then drives back and forth to the hospital every evening.

Weeks said Wyatt endures long and painful examinations of his eye every day and multiple changes of his bandages. He has hours of physical and occupational therapy and is entering a phase with lots of work including exercising his face to stretch his skin grafts. The PT involves a series of hand and finger exercises, massage and stretching the grafts on his arm and lower face with his fingers and a couple of PT devices that he has been given to use.

“Being hospitalized is very confining for a kid who pretty much lives outdoors and it was almost a month before he could go outside at all,” Weeks said. “Wyatt is a happy, kind kid – a real social butterfly with a positive outlook, which is coming through even in the middle of these trials.”

Meanwhile the Jemez community and people from all over the country and abroad have responded to Wyatt and his family in amazing ways. Friends and neighbors have raised money through events and a GoFundMe account has raised almost $36,000 to help with the family’s medical insurance during Michelle’s leave of absence and other expenses.

Weeks said the hospital staff is amazed by Wyatt’s room, which is decorated with t-shirts, patches and coins received from fire departments throughout the United States as well as Germany and Guam. Package after package has arrived containing gifts and well wishes for Wyatt’s speedy recovery. Banners saying #WyattStrong533 have been hung in his room and at La Cueva Fire Department. 533 is his radio ID number.

What is particularly moving for the family is the contact and support they have received from parents of Granite Mountain Hotshots firefighters who died tragically in June 2013 in a wildland fire in Yarnell, Ariz.

Wyatt also received a photo from President Donald Trump with a message that reads, “You are a true hero and servant. Remember that the work you do as a firefighter or anything you do in life, that you are working for the Lord”.

A hockey team of corrections officers in Michigan is holding a charity game against a group of Purple Heart recipients for him. Local artists have auctioned their work to raise funds and one person even sold a vehicle to help out. Various other fundraising events are planned. 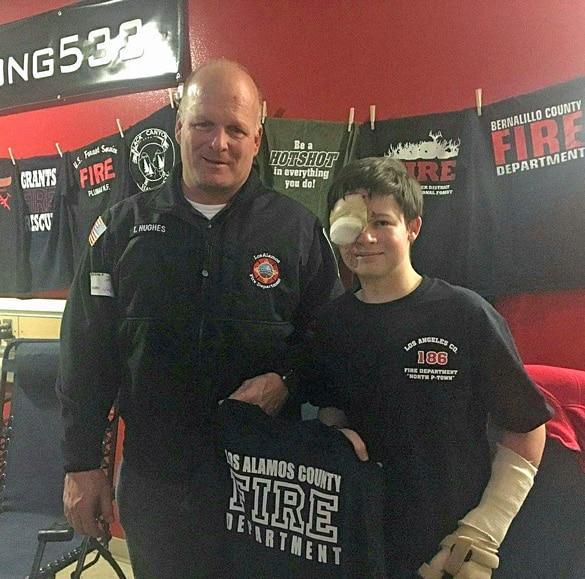 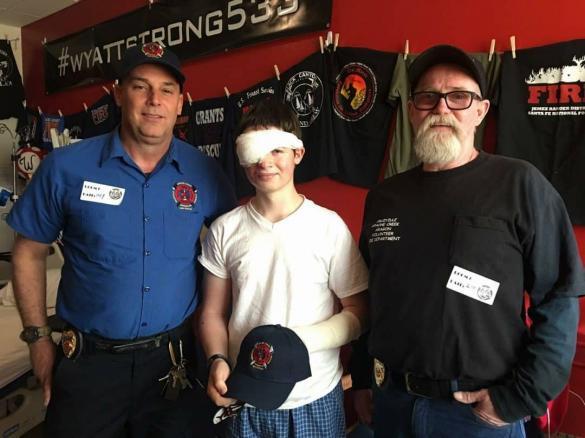 Wyatt Taylor visits with Chief Charles Pollina and Richard Burton of Apache Creek Fire Department who visited him at the hospital. Courtesy photo