LA Comes Back But Can’t Overtake Academy On The Road 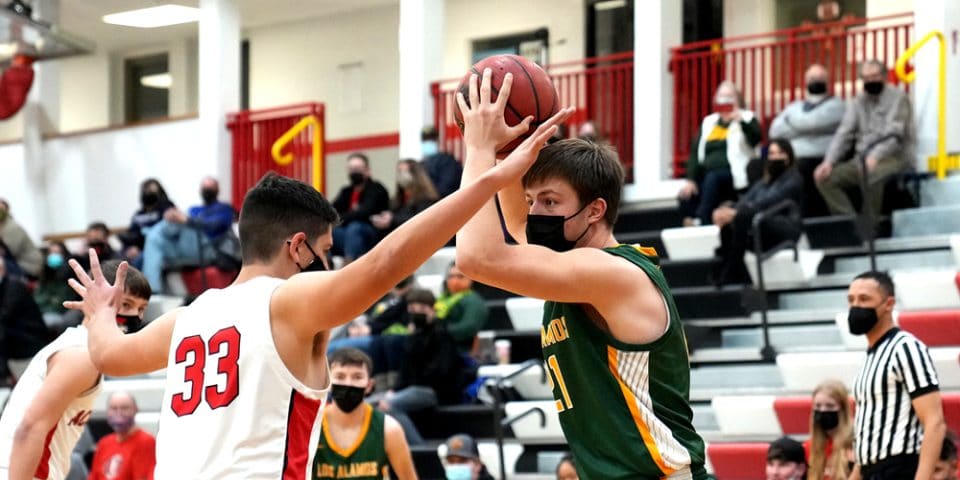 Ronald Esch looks for a teammate to pass to in the first period while being closely guarded by Andres Rivera. Photo by John McHale/ladailypost.com 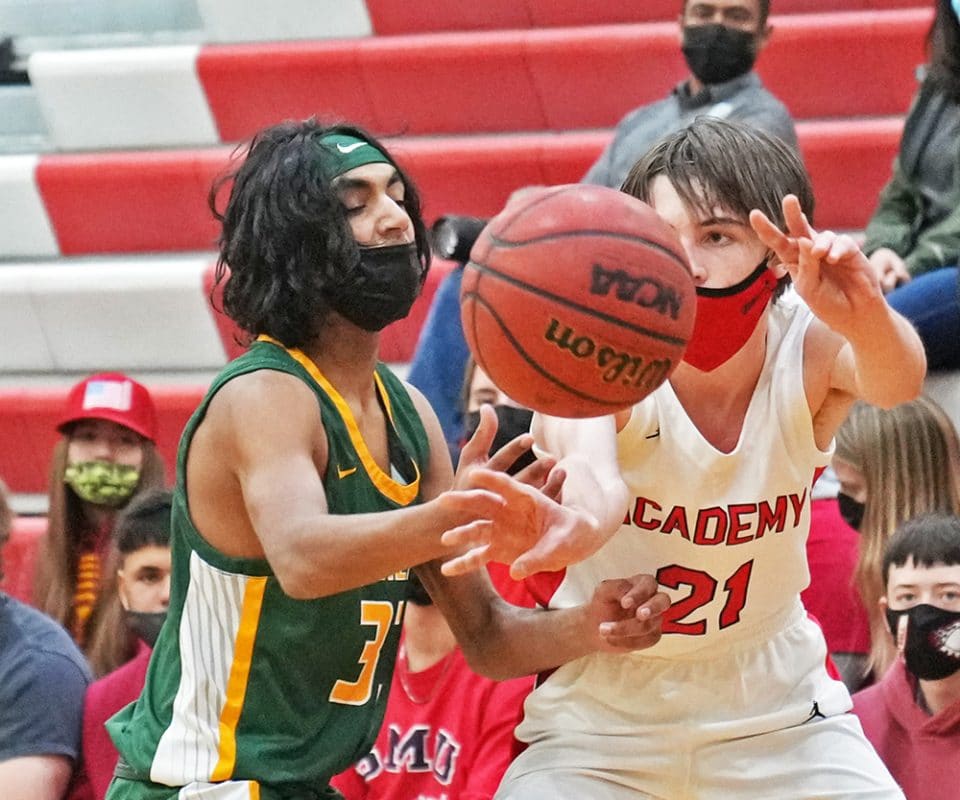 Owen Geiger and Kane Demers reach for a loose ball near the Charger basket. Photo by John McHale/ladailypost.com

Despite playing with a short bench Tuesday night, the Los Alamos Hilltopper boys basketball team hung around with the Albuquerque Academy Chargers until the end of their nondistrict contest.

Los Alamos, which trailed by double-digits a good chunk of the way Tuesday, closed it to within two possessions several times in the second half, but never could knot the score. The Chargers made some key late free throws to win it 54-47 in Albuquerque.

Academy, one of Los Alamos’ storied rivals, had a big showing defensively Tuesday. The Chargers employed a tough man-to-man defense that stymied the Hilltoppers most of the night.

Perhaps more importantly, though, the Chargers also won the rebound battle handily. Height-wise, neither team had a distinct advantage, but the Chargers’ boxing out was considerably better and their performance under the basket limited the Hilltoppers to just a handful of second chances.

Los Alamos was playing without Mark Cleland, its 6-foot-10 center, against Academy (7-4). Cleland was one of four Hilltoppers scratched from the game before tip-off – Ryan Zeik, Josiah Fresquez and Rick Valdez were the others – and his presence under the basket was sorely missed.

On their defensive side, the Hilltoppers had no answer for Academy’s Kellan Gehres. Gehres hit four 3-pointers in the first half and then canned 7 of 8 free throw attempts in the fourth quarter to ice his team’s victory.

Niko Garcia had 16 to lead Los Alamos (8-6), 9 of those coming in the first half. Garcia fouled out late in the game when the Hilltoppers were forced to foul to preserve time – many Hilltoppers played a big portion of the game in foul trouble, but Garcia, who wasn’t in serious trouble until the fourth quarter, was the only one to eventually foul out.

Wesley Stanfield had perhaps his best game of the season Tuesday night. He finished with 10 points and also contributed four steals on the defensive end to try to keep the contest close.

Elijah Ortiz had three 3-pointers Tuesday to finish with 9.

Los Alamos trailed by three after one period and eight at the break, but Academy looked like it was ready to pull away in the third quarter, going up by 13 at about the halfway mark and Los Alamos struggling offensively against the man-to-man defense.

Garcia hit a pair of tough shots, including a runner with 35 seconds remaining in the fourth to cut the Charger advantage to just 3, but the Hilltoppers would never be able to fully erase the deficit.

Los Alamos has gone just 2-3 in its last five games, but those games included a major upset of former district rival Capital and a close call against the high-octane offense of Lovington.

The Hilltoppers will travel to the extreme western part of the state when they face Miyamura Saturday afternoon in Gallup. They open District 2-4A play Jan. 20 against Moriarty. 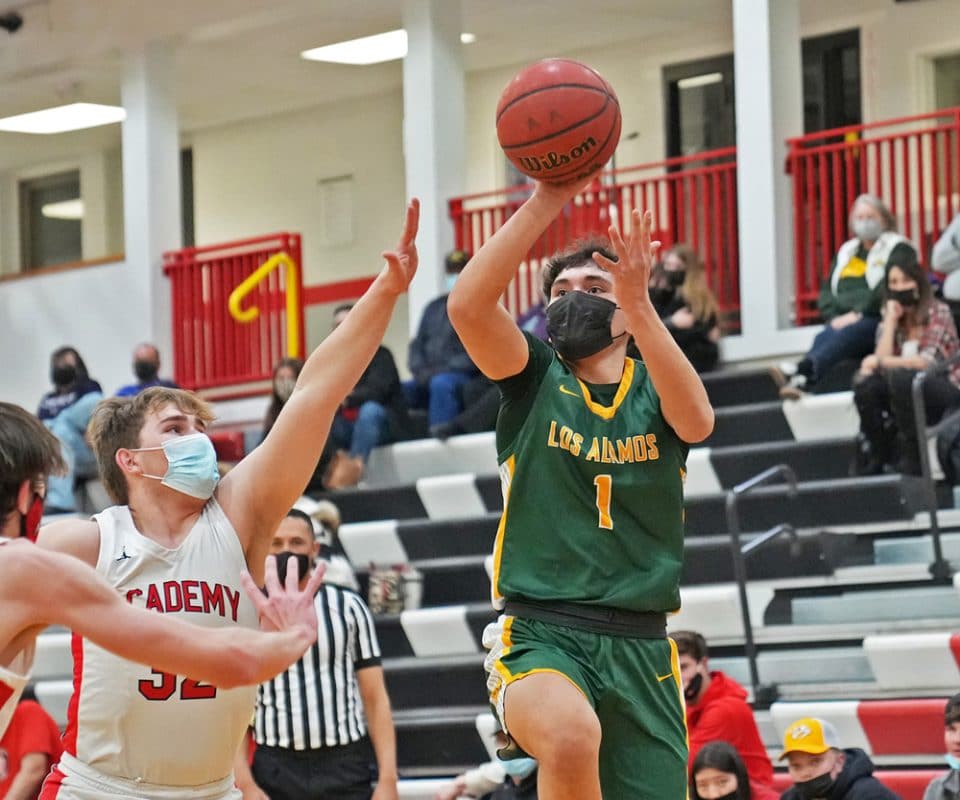 Niko Garcia hits for 2 in the first period, he was the Topper’s high point man with 16 for the night. Photo by John McHale/ladailypost.com 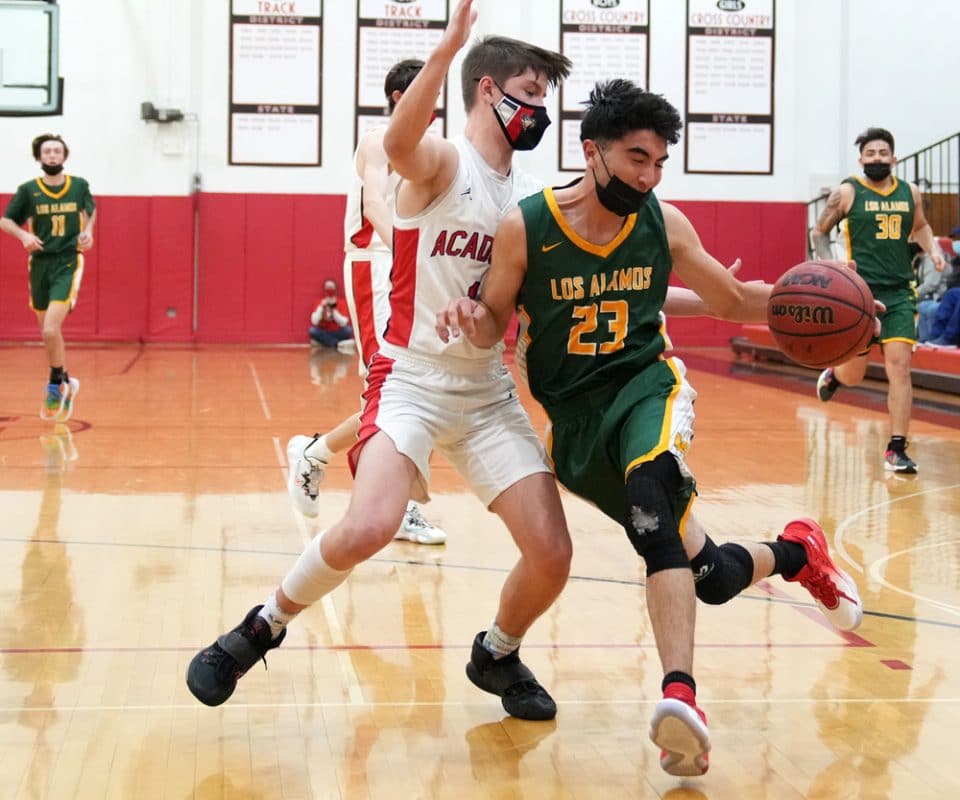 Santiago Espinosa brings the ball down court in the 2nd period and is pressed buy Kellan Gehres. Photo by John McHale/ladailypost.com 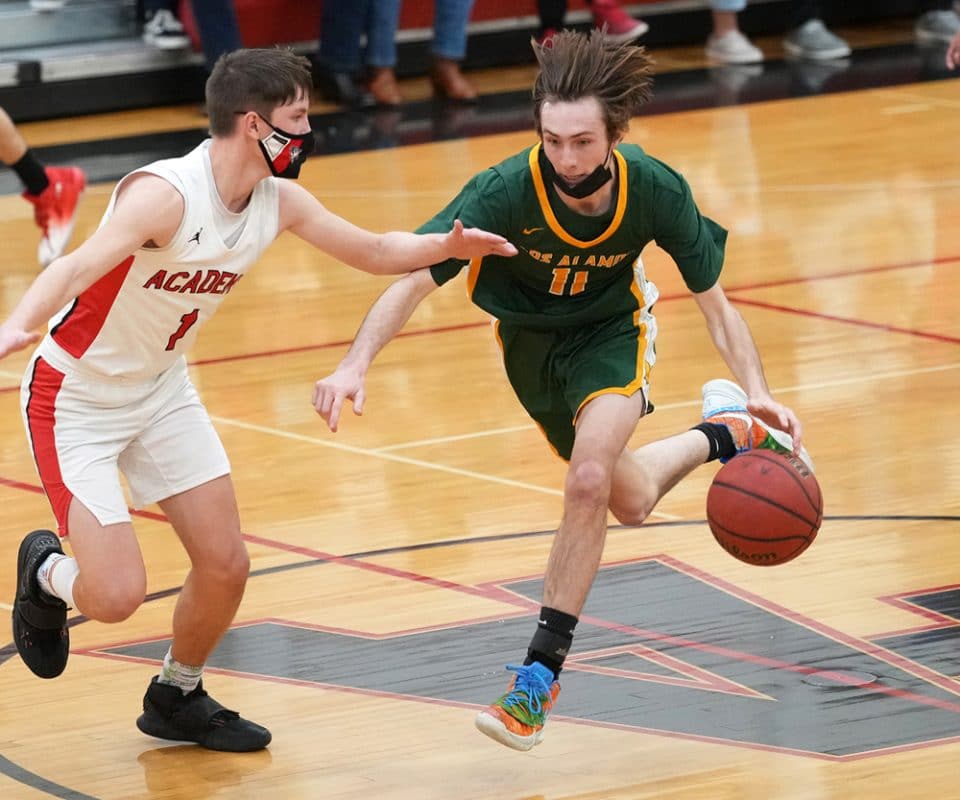 Wesley Stanfield drives the basket past Kellan Gehres in the 3rd period for a 2-point shot. He had one of his best games on defense and scored 10 points for the game. Photo by John McHale/ladailypost.com