Kiwanis Fourth? It Was Fantastic! 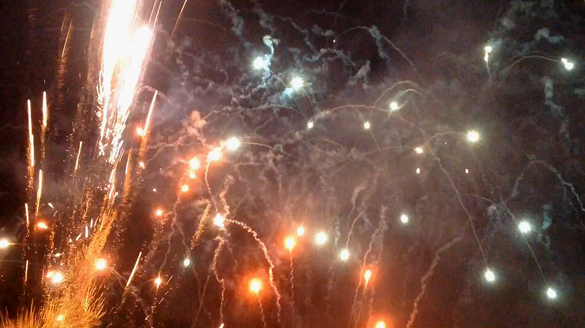 Shells from one of the ‘basins’ on the ground fill the sky at the Fourth of July Fireworks in Overlook Park. Photo by Eric Schaller 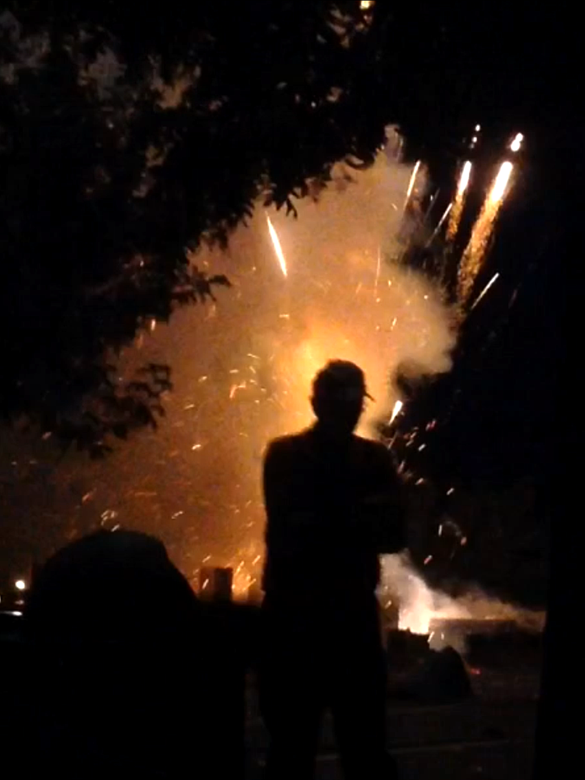 Fireworks Chairman Pat Soran is silhouetted by the opening volley at the Kiwanis Fourth of July Fireworks. Photo by Eric Schaller 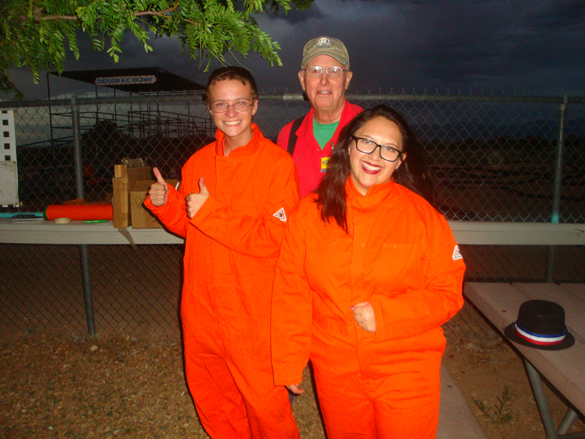 Donald Poston, front left, Lieutenant Governor of the Sangre de Cristo Division of Key Club, and Esperanza Tapia, front right, the President of the Los Alamos High School Key Club, held the ‘Best Seat in the House’ tickets on July 4. Behind them is Fireworks Chairman Pat Soran, who saw to it that they had adequate safety gear and knew exactly how to ‘push the button’ to start the show. Photo by Don Casperson

Those glorious, sparkling flowers and shooting stars in the sky on the Fourth of July are very beautiful—but they’re also extremely expensive in both time and money.

That’s why the Kiwanis Club of Los Alamos asked for donations of $5 per adult from those entering Overlook Park in White Rock on the Fourth. The 4,470 aerial shells in the 2016 Kiwanis Fourth of July Fireworks Show cost approximately $18,000.

The large crowd of generous viewers on July 4, 2016, have already made the 2017 show possible. Kiwanis Treasurer Cindy Eaton said that gate receipts at the 2016 show topped $27,000.

“I believe it’s the highest ever,” she said in a telephone interview. She added that 24 workers helped collect donations at the gates from noon to 9:15 p.m. on July 4 as people poured into the park. It was hot, and sometimes the line stood still for a while. However, for the most part, she said, people were friendly.

“In my opinion,,” she said, “it was a very, very successful event, and I really appreciated the people who helped.”

Fireworks Chairman Pat Soran said, “We should have a good show next year. The funds are available.”

That’s not all. Vendor Chairman Don Casperson said that there were approximately 25 booths on the field, and “about half of them were food vendors.” Hungry people on the field could dine on everything from good-old-American hamburgers to Italian ice, from roasted corn to Sno Cones. And as of July 9, vendor fees paid to Kiwanis totaled more than $2,000.

There were also informational booths, including one representing the Los Alamos Daily Post, and one from White Rock Baptist Church.

While people were waiting to see the fireworks, their children had an opportunity to enjoy several bouncing toys from “Ton o’ Fun” in Bernalillo. The kids could also buy glow rods from VaLynn Purvis Party To Go at one of the booths on the field.

The crowd got to see two performances by Roger Handrahan’s Habañero Sky Divers. Each show included four sky divers who jumped from a Cessna 182 and landed, at a run, in a field east of the crowd. The last to land, in the second show, was Handrahan himself, who brought down a U.S. banner and a New Mexico flag.

Sim Balkey, a country music star, and the Los Alamos Community Winds both provided live music. And Kiwanis Secretary Louise Mendius, a laboratory employee who is also an opera singer, helped prepare the firing line and then went off to perform the “Star Spangled Banner.” When she sang the word “home” in the last line of the song, the fireworks show started with a boom and filled the sky with light.

Asked just how much work it took to produce the blazing 30-minute fireworks show, Soran said that a special crew of six people (Pat himself, his wife Ann, their grandchildren Nate and Emily, Rick Reiss, and John Arrowsmith) spent about 40 hours this year in extra-early squibbing (inserting electronic fuses into the shells to make firing virtually certain). Then on Sunday, June 26, Pat, Ann, Nate and Rick poured in still more hours. On Saturday, July 2, a crew of approximately 15 volunteers finished up the squibbing in one massive two-hour session.

On the day of the show, Monday, July 4, about 29 people helped to load the shells and the necessary equipment onto a truck, transport them to the firing site, set up the racks and rails, wire up each shell, and connect everything appropriately to the computer that held the firing plan—a plan developed by Rick Reiss.

Soran said, “I thought Rick did a really nice job.” Soran noted especially the “spectacular” opening and closing volleys. He also noted that there were only four “duds” among the 4,470 aerial shells—a strong indication of good squibbing and wiring.

He said that the volunteer crew was “very efficient” this year in setting up the firing line, and, after the show was over, in taking everything apart, loading it onto the truck, taking it back to the shed, unloading, and stowing all of the gear. Ironically, so many volunteers stayed after the show to help take down the firing line and they were so industrious that the work was done early, and the entire crew had to wait approximately an hour until the road was clear of departing show-goers and the path to the storage shed was open.

The only real threat to the show this year came at about 5 p.m. when the wind increased sharply. It actually blew down the old Sunrise Kiwanis tent, which was in use on the field, but volunteers were able to retrieve the canvass and reunite it with the uprights. Volunteers preparing the firing line watched anxiously as the wind set trees swaying. They were concerned that the sky divers would be unable to jump, and the show itself might have to be canceled for safety reasons. However, the wind stopped in about an hour, and the entire show went on as planned—complete with a beautiful sunset.

Two people got a rare opportunity to see much of this activity from “behind the curtain.” For weeks, members of Key Club, the Los Alamos High School (LAHS) affiliate of Kiwanis, had been selling tickets for “Best Seat in the House” at the fireworks. The winners—with careful coaching from Soran and others—were to “push the button” to start the show, and then sit with the Kiwanis firing-line volunteers to watch the shells blast off and fire directly overhead. Morrie Pongratz, a long-time liaison between Kiwanis and Key Club, bought a number of tickets, and he won the drawing, but instead of using the tickets, he gave them to Donald Poston, Lieutenant Governor of the Sangre de Cristo Division of Key Club, and Esperanza Tapia, the president of LAHS Key Club.

Kiwanis provided Poston and Tapia with protective clothing, pointed out how to “push the button,” and made them part of the team.

In an interview right after the show, asked her first impression” of the fireworks, Tapia said, “Loud. And really bright.” And she added, “I had so much fun. It was great to be part of it.”

Poston said the show was “thrilling.” He added, “It was so cool—full of action.”

The leaders of Kiwanis were quick to thank their own people for a job well done. Kiwanis President Lisa Wismer sent out an e-mail message that said, “I want to tell all of you how very proud I was to be part of yesterday’s 4th of July extravaganza.  I must thank everyone involved, with a special thanks to Steve (Boerigter), Don, Pat and Rick, Cindy and so many others who put in a tremendous amount of work towards a very successful event. “

Boerigter, chairman of the show, kept his comments simple. He just said it was “the biggest Fourth of July ever.”