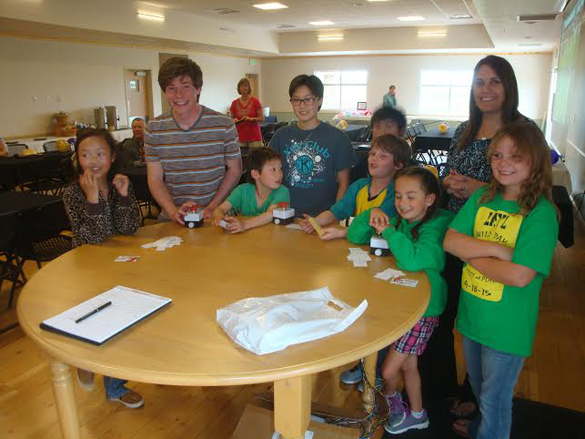 K-kid teams with helpers Luke Kachelmeier helping team 1, Sara Shiina helping team 2 and RaeAnn Harp helping team 3. Photo by Don Casperson
KIWANIS News:
Los Alamos Kiwanis realized a total of $6,717 from ticket sales, donations, and betting at the May 2 Kentucky Derby Party.
Kiwanis First Vice President Lisa Wismer said $4,175.32 of that amount will go to Project Eliminate, the Kiwanis International-UNICEF campaign to raise $110 million and wipe out maternal and neonatal tetanus worldwide.
Kiwanis Treasurer Cindy Eaton, who handled the money for the event, said the party “was great fun.”
Kiwanis Division 3 Lt. Gov. Don Casperson agreed. He noted that Kiwanis had decided to expand the traditional Derby Party to make it a family affair, and the expansion seemed to work.
The festivities began with free Jeopardy games at the Golf Course for children. Kiwanis member Rick Reiss served as the master of ceremonies for the games. There were three teams. Key Club members Sara Shiina and Luke Kachelmeier and kindergarten teacher Raeann Harp (one of the faculty advisors for the Aspen Elementary School K-Kids), helped with the games.
“Everybody was a winner,” Casperson said. Kiwanis gave Sonic gift certificates to all children who participated, to the Key Club helpers and to Harp.
The day’s events then moved on to the presentation of food and activities for children with $15 tickets. This phase of the party ran from 3:30 p.m. until 6 p.m. and provided fun for the kids while adults watched the derby. Kiwanis member Kristy Ortega assisted as the young people made their very own derby hats.
In the final stage of the event, adults (who had paid $50 for tickets that included both hors d’oeuvres and one drink, or $40 for food alone) partied in the brand new Los Alamos County Golf Course Clubhouse. Casperson said he used the Clubhouse projector and roll-down screens to show the actual running of the 141st Kentucky Derby.
Kiwanis provided the sound system. The result, he said, was “large, clear pictures and good sound.” He added that “quite a few” party-goers were holding winning tickets when the favorite, American Pharoah, came in first. Mary Cunningham, for example, had three tickets on the No. 1 horse, each worth $17 in party betting.
Adults attending the party munched on snacks ranging from barbecued spare ribs and chicken wings to salads, strawberries, teriyaki meatballs, and toasted bits of bread with tomato and meats. They also enjoyed the traditional derby drinks (mint juleps), and a variety of other offerings from a full bar. 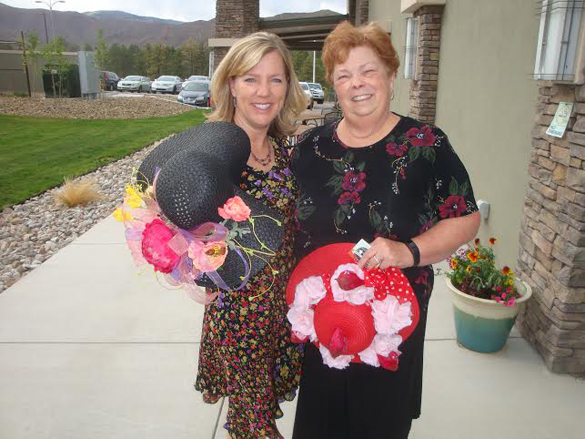 Joanna Gillespie and Cheryl Pongratz with their derby hats. Photo by Don Casperson
In addition, there was an adult derby-hat contest that drew some eye-dazzling entries. Jessica Jakubanis, whose hat featured a spectacular Kentucky Horse Farm, won first place in the hat contest. Joanna Gillespie, executive director of the Los Alamos Public Schools Foundation, won second place (and a gift card to the Pajarito Brewpub and Grill) with a wide-brimmed black hat trimmed with red and orange flowers and lavender ribbon.
Kiwanis member Cheryl Pongratz wore a red straw hat that featured large white flowers. She called it her “run from the roses hat.”
Summing up the day, Casperson said, “The Clubhouse was a spectacular place … ideal for what we wanted to do … We should do it again!” He added that Patrick Mockler-Wood and Pawel Listwan of the Brewpub were “very helpful.” And he noted that Linda Daly and Wismer were excellent chairwomen; Ortega stepped in and did a great job with the children; Reiss was an outstanding Jeopardy master of ceremonies; and Eaton did a first-class job handling finances for the party. Casperson himself ran 100 feet of cable to make broadcasting the race possible.
“It was definitely a success,” Casperson said. Wismer told the club that she has already started the process for holding a similar party next year.
Menu
Los Alamos
28°
Clear
7:11am5:22pm MST
Feels like: 28°F
Wind: 0mph W
Humidity: 57%
Pressure: 30.32"Hg
UV index: 0
SunMonTue
45/27°F
46/25°F
41/21°F
Weather forecast Los Alamos, New Mexico ▸