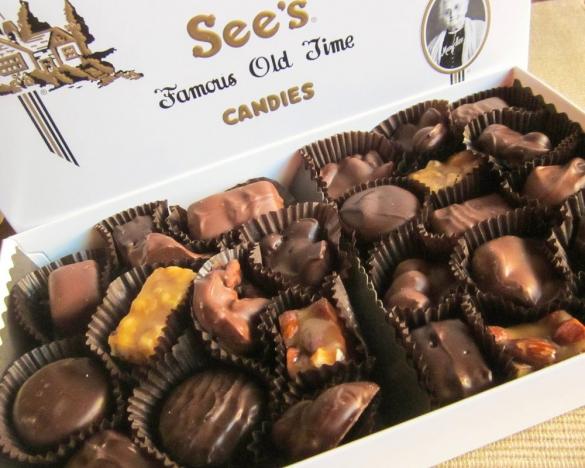 The Kiwanis Club of Los Alamos is trying a sweet, new approach to fundraising this holiday season: The club is selling See’s Candies.

Kiwanis candy sales (only during the holidays) are intended to be just one of several special projects aimed at raising money to replace what was lost when drought and high fire danger forced a one-time cancellation of the club’s Fourth of July Fireworks in Overlook Park this year.

Kiwanis Treasurer Cindy Eaton was the person who suggested selling See’s. Eaton, a dedicated globe trotter, said she was “on a trip to Croatia” when she met a fellow traveler from California (also a Kiwanis member) who had been enjoying See’s Candies for years.

Subsequently, Eaton became a fan of the candy herself. (Her current favorite flavor is “Nuts and Chews.”)

She found that the candy company sees itself as a corporate partner of Kiwanis. The California Kiwanis clubs raise money by selling mounds of See’s each year, keeping a pre-set percentage of the sales money for their own projects, and representatives of the company also attended the most recent convention of the Southwest District of Kiwanis International.

For one thing, the company has an interesting history filled with innovation.

Canadian chocolate salesman Charles A. See moved to Los Angeles and started the company in 1921, making use of the recipes of his mother, Mary See, who believed in cooking with only the very best ingredients. By 1925, there were a dozen neat, little black-and-white See’s chocolate shops in LA, including one in the Grauman’s Chinese Theater building.

The company launched door-to-door delivery, becoming a favorite of “the stars.”

In 1929, when the Depression forced many candy stores out of business, Charles A. See established discounts for volume purchases and kept using top-of-the-line ingredients. In 1931, See’s built “Mary See’s Sunlit Candy Studio,” where crowds came to watch through plate-glass windows as confections were created.

In 1936, the company opened an operation in San Francisco. In four years, there were 18 shops there.

The company had a candy-creation studio at the San Francisco World’s Fair.

During World War II, when some key items were rationed, See’s continued to use the best ingredients, closing stores for the day when they ran out of the relatively small number of candies they were able to produce. It worked….

Laurance See, the founder’s son, had a float built for the 1949 Rose Bowl Parade. People all over the country saw the giant See’s bunny on television.

In 1961, Laurance See acted on a hunch and opened a  store in Phoenix, Ariz., where the population subsequently boomed—just as he had expected.

In 1972, Warren Buffet and Charlie Munger bought the company, and it became part of the Berkshire Hathaway empire. Reportedly, Buffet eats See’s Candies every year while speaking to the shareholders.

See’s now has more than 200 stores in America, and it even has one in Hong Kong.

When you bite into a See’s Candie, you’re part of a long, proud history. And, Eaton said, “It’s really good.”

Los Alamos Kiwanis President Philo Shelton commented, “Their sugar-free candy is excellent.” And Kiwanis member John Arrowsmith noted that See’s used to have a store in Albuquerque, and his wife’s cousin “loved it.”

In fact, just a few weeks ago, See’s announced that it plans to return to Albuquerque soon, opening another store.

How To Buy It Here

Want to try See’s and help Los Alamos Kiwanis projects at the same time? Kiwanis will be selling See’s Candies locally on the following days at the listed events: