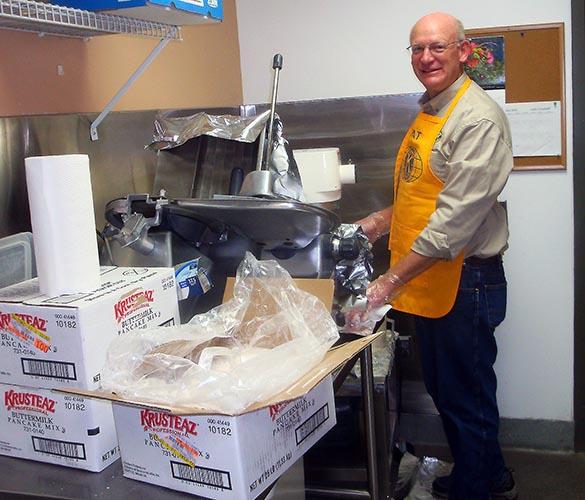 The Kiwanis “Breakfast with Santa,” which opened the Los Alamos Holiday Season Saturday, Dec. 8, was a great success.

Ann Hayes, chairwoman of the event, said it was “just great.”

“Good weather. Lots of help. Lots of people. It was just very nice,” she said.

The breakfast began at 7 a.m. and ended by 11 a.m.—but the flow of customers was so steady that the club ran out of pancakes about 10:30 a.m., she said, and that is “unusual.” Usually, she said, the first supplies to go are the eggs and sausage, but this time, they lasted until the end.

“We tried to keep a count out in front,” she said, but there was no way to keep track of babies and people who came in the back door of the Betty Ehart Senior Center. She believes Kiwanis served “700 plus”, feeding them well before they headed out to participate in the many other events on the community’s busiest day of the year.

In addition to money for meals, Kiwanis took in donations totaling $3,300. Of that amount, $1,500 came from Del Norte Credit Union, which provides money every year to help Kiwanis in its service projects. The remaining money came from cash and checks that individuals dropped into a box marked “Donations.” Once the cost of the breakfast is covered, the remaining money will go to help finance the Foster Children’s Christmas Party in Española on Dec. 20 and other programs for foster children.

At the annual “Breakfast with Santa,” Kiwanis also takes in food donations to help LA Cares. Hayes said the food donations this year filled up the space set aside next to the rear entry to the Senior Center.

Hayes estimated that at least as many members of Key Club helped as Kiwanis members.

And Damian Scammell, a member of another youth-affiliate club, Barranca Mesa Elementary School K-Kids Club, also helped—for the second year in a row.

“Santa Claus,” a good friend of Kiwanis member Pat Soran, came to the breakfast—as he always does—and he had a long line before him by 7:30 a.m. Saturday. After that, Hayes said, business continued to be steady.

Kiwanis members Rick Reiss, Roger Stutz and John Arrowsmith took more than 300 photos of young people with Santa Claus, printed them out electronically, and gave them to families free.

And the LA Flute Choir played Christmas carols for one hour.

Saturday was an extraordinarily busy day for some members of Kiwanis.

One example: Cheryl and Morrie Pongratz both worked at “Breakfast with Santa,” and, later, Cheryl ran the “Cookie Walk” in Fuller Lodge, which benefited the Family Council and its Counseling Center and Youth Activity Centers.

Cheryl said later that day she and members of the Family Council Board (and friends) made hundreds of cookies, which were then decorated by Key Clubbers. During the sale Saturday, customers bought 130 boxes of 13 cookies each.

From time to time, the Aspen K-Kids shouted “Merry Christmas” to the crowds along Central, and the crowd shouted back, warming the night with their support.