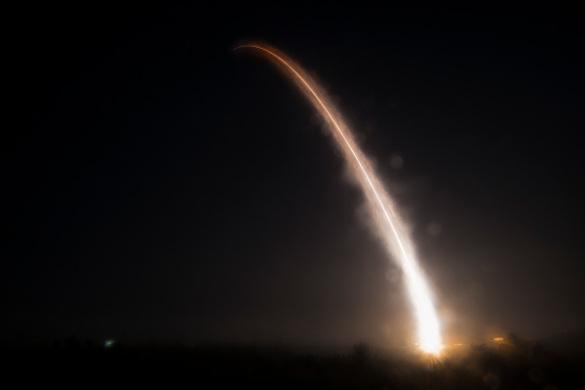 Minuteman III ICBM launches during an operational test. An unarmed LGM-30G Minuteman III intercontinental ballistic missile launches during an operational test at 2:42 a.m. Pacific May 1, 2019, at Vandenberg Air Force Base, California. The Ground Based Strategic Deterrent ICBM is the follow-on to the aging Minuteman III, which first became operational in the mid-1960s. The GBSD program is managed by the Air Force Nuclear Weapons Center at Hill AFB, Utah.  Photo by Airman 1st Class Aubree Milks
KAFB News:
KIRTLAND AFB ― The Air Force released a request for proposals Tuesday for its Ground Based Strategic Deterrent intercontinental ballistic missile weapon system program.
The request is for the weapon system’s Engineering and Manufacturing Development phase and includes five production lot options to produce and deploy the weapon system.
The two contractors for GBSD’s current Technology Maturation and Risk Reduction phase, Boeing and Northrop Grumman, will compete for the EMD contract. The Air Force Nuclear Weapons Center expects to award the contract in the fourth quarter of fiscal year 2020.
The GBSD is the follow-on to the aging LGM-30G Minuteman III ICBM, which first became operational in the mid-1960s. While some components and subsystems have been upgraded over the years, most have supported over 50 years of continuous operation.
In May, Ellen Lord, undersecretary of defense for acquisition and sustainment, expressed the need to upgrade nuclear capability and modernization to maintain a deterrence edge. She said it no longer makes financial sense to continue to upgrade or extend the life of existing Minuteman III ICBMs and the new GBSD weapon system must be brought online.
“There is no margin to do another service life extension program on Minuteman III, because not only would it be more expensive than developing GBSD, but you would not have the resiliency in the capability because you would not have the modern equipment, you would not have the actual capabilities from a functional range point of view [or] warhead capability,” Lord said. “So we need to, by 2028, start replacing [ICBMs].”
Senior Air Force leaders also support the new GBSD system.
“If you look at the threat that we face, Russia just completed their modernization of their triad this year…because they know they cannot defeat us—and certainly can’t defeat NATO—conventionally,” said Chief of Staff of the Air Force Gen. Dave Goldfein at a congressional committee hearing in April. “So, our modernization and recap of the triad is just in time because in the missile leg, key parts of that program expire right about the time that we bring on the new Ground Based Strategic Deterrent to replace it.”
The Air Force Nuclear Weapons Center is the lead for the Air Force’s GBSD acquisition effort.
“The GBSD will be designed to be adaptable and responsive to the challenges posed by the pace of technological change and new threat environments,” said Maj. Gen. Shaun Morris, Air Force Nuclear Weapons Center commander and the Air Force program executive officer for strategic systems. “After a complete evaluation of the proposals, the EMD contract will be awarded to the company which will provide the best overall value to the warfighter and taxpayers.”
“The GBSD program office members have worked hard to analyze the costs of every requirement, used modeling and simulation to evaluate every decision and keep the design, development and deployment of the weapon system on track,” said Col. Jason Bartolomei, GBSD program manager. “The EMD request for proposal is the next step in the development of a safe, secure and effective GBSD weapon system.”
The GBSD program office is part of AFNWC’s ICBM Systems Directorate at Hill AFB, Utah. The center is responsible for synchronizing all aspects of nuclear materiel management on behalf of Air Force Materiel Command in direct support of Air Force Global Strike Command.
Menu
Los Alamos
79°
Sunny
5:48am8:23pm MDT
Feels like: 79°F
Wind: 12mph SW
Humidity: 23%
Pressure: 29.93"Hg
UV index: 0
WedThuFri
91/64°F
88/64°F
86/64°F
Weather forecast Los Alamos, New Mexico ▸