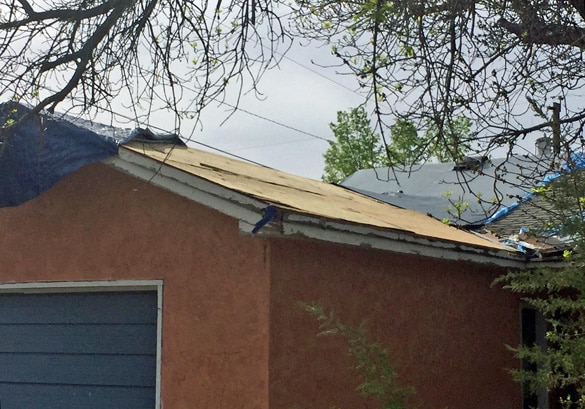 The roof of a residence at 354 Kayenta Dr. in White Rock shows signs of deterioration from exposure to the weather. Courtesy photo 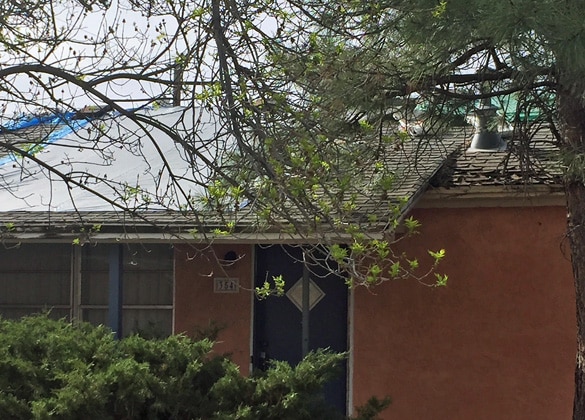 Deterioration of the roof over the past three years has brought Los Alamos County Code Enforcement officials back into Municipal Court in an attempt to get the issue resolved. Courtesy photo

Neighbors of a homeowner at 354 Kayenta Dr. in White Rock are beginning to complain about the condition of the roof, which has been cited by Los Alamos County for being in disrepair and covered with blue tarps for more than three years.

Jay Stimmel was slated for a hearing Monday afternoon before Los Alamos Municipal Judge Alan Kirk but failed to appear. Los Alamos Associate County Attorney Kevin Powers told Judge Kirk this was not the first time County staff has been there and Stimmel has not been present. He said the last time a hearing was scheduled, Stimmel called in that morning and asked to be excused due to illness.

“I’m asking for a warrant, but I don’t know if you’re prepared to go that far,” Powers told Judge Kirk.

Judge Kirk said with Stimmel’s failure to appear and until he appears back in court, the clock is stopped.

“We’ll either issue a summons or a warrant. I’ll look at the case file and the history of his appearance,” he said.

Powers told the court that the County is starting to receive complaints.

“We’re doing all we can, but the neighbors are finally getting tired of this,” he said.

As part of the judgment and sentencing imposed, Stimmel was required to submit to the County’s Community Development Department and Chief Building Official Michael Arellano photographic evidence and other documentation showing his progress in the replacement of his roof. The documents were to be submitted every two weeks from the date of the judgment and sentencing, with the first being due Aug. 28.

During the August trial, Arellano estimated that the project could have been completed in a day and a half and that the tarps being used are not rated for UV rays or appropriate for protecting the roof. He also said the roofing materials stacked on the roof at that time were a safety issue. At that trial, Judge Kirk told Stimmel he didn’t know how to fix the situation, adding that he had given Stimmel almost a year and a half with tremendous leeway and a huge number of extensions when the issue came to court the first time.

In November, Judge Kirk held a status hearing and because the roof work had not been completed and the required updates were not given to the CDD as ordered, Stimmel was ordered to pay the suspended portions of his fines to the Court. A new notice of violation was issued to Stimmel and pleaded not guilty in Court Jan. 8.

As of today’s Court setting, CDD staff said the roof is still out of compliance and no permit has been taken out for repair.

Meanwhile, some Kayenta residents expressed concern Tuesday to the Los Alamos Daily Post about the state of the roof and property.

“During the last wind storm, significantly larger pieces started coming off the roof and landing in neighbor’s trees, bushes and yards. At this point, we are starting to see legitimate safety and environmental concerns and we hope it can be resolved quickly,” one resident said.