Justice Chávez: Constitutional Amendment No. 1 Could Streamline Appeal, Save Money 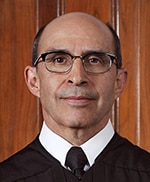 New Mexico voters can lay the groundwork for the speedier resolution of certain legal matters and save taxpayer money by adopting Constitutional Amendment No. 1 on the general election ballot.

The proposed amendment would authorize the Legislature to adjust or streamline the appeals process by enacting a statute – passing a bill and having it signed by the governor — rather than changing the state constitution.

By itself, approval of the constitutional amendment will not alter which court hears an appeal. Those decisions would be left to legislators to decide after careful study in the future.

Currently, the New Mexico Constitution is very restrictive. All decisions of probate, magistrate and metropolitan courts must be appealed initially to a district court. Further appeals could be made to the Court of Appeals and state Supreme Court.

That language dates to the early 1900s when the state constitution was drafted. At the time, no court below a district court was considered a “court of record,” meaning the court maintained a permanent record of its proceedings. In hearing an appeal, the district court would create a record of its decision that could be reviewed by a higher court.

However, New Mexico’s court system has evolved over time to better meet the needs of communities across the state. For example, the Legislature created the Bernalillo County Metropolitan Court in 1979 and made it a “court of record” for civil cases and certain misdemeanor criminal cases – DWI and domestic violence.

Yet because of the current constitutional language, appeals of those small claims civil cases and specified misdemeanor cases must go first to the district court in Albuquerque for an appeal. A district court judge reviews the record of the evidence and legal issues to determine whether the lower court erred in its decision.

From the district court, the case could be appealed to the Court of Appeals and possibly the Supreme Court.

By contrast, a case of armed robbery would go to trial in the district court, which creates a permanent record of the proceeding, and then the case could be appealed to the Court of Appeals and potentially the Supreme Court.

If the constitutional amendment is adopted by voters, the Legislature would have the authority to streamline the process. Legislators might decide in the future that DWI cases in Metro Court could be appealed directly to the Court of Appeals rather than first going to the district court. That would provide the same appeal rights for a misdemeanor DWI as now exist for armed robbery.

Such a change could save taxpayers the costs of prosecutors, public defenders, judges and court staff who must dedicate time and resources to each step of what can be multiple levels of judicial review in the current appeals process.

Constitutional Amendment No. 1 represents common sense, good government at its best. It allows legislators to adjust the appellate process to best meet the needs of New Mexicans today as well as in the future as the state grows.