Just One Thing To Do This Week: Hang In There 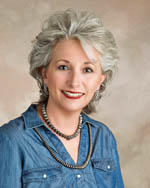 So many people are sick right now. Los Alamos has been hit hard by the flu, which showed up a little late this year, and a very nasty virus is circulating, keeping people in bed for days. It is down-right hazardous to leave the house.

I had that virus a few weeks ago and it knocked me off my feet for nearly a week. Someone asked me how I felt and I said, “I feel like I have been hit by a bus.” And then I thought, “Oh wait, being hit by a bus is nothing like this!”

Several years ago when I was living near Hermosillo, Mexico, I was hit by a bus. It was totally my fault. I thought I was in a parking lot and I was actually on a one-way street. If you had been there you would understand my confusion. Of course, my sister was with me (so yes, this means she was hit by the bus, too) and she didn’t understand my confusion. She apparently saw the bus coming. But I, unfortunately did not.

I was driving a minivan up and down the narrow, congested, depths of downtown Hermosillo, and I accidently pulled out in front of a big old bus with a rhino bar welded to the front, and it T-boned my van right in the driver side door.

With the impact, the van began to spin in circles down the middle of the street, sparkly glass flew across my vision like a million twinkly fairies and I thought, “So, this is what it feels like to be hit by a bus … hmmmm … this isn’t so bad.” And then the van stopped moving and everything hurt, I couldn’t breathe and I couldn’t see clearly.

A very nice man climbed in the van, wedged himself behind my seat and held my head still. He was whispering “tranquilo, tranquilo” but what I heard was “tequila, tequila.” The EMTs were fast and kind and the local paper showed up to take a photo of my bloody head hanging out of the window. They used that photo on the front page three different times over the next few months.

The first time was immediately after my accident. The headline read, roughly translated, “American Woman Drives in Front of Bus for No Apparent Reason.” I think their point was, alcohol was not involved and it was broad daylight.

The second time they ran the photo was when there was another accident at that same corner and they didn’t have a photo for that particular accident. That time the caption was “Another accident just like this one when the American woman drove in front of bus for no apparent reason.”

The third time they used the photo was to highlight the dangers of driving in downtown Hermosillo, encouraging people to drive carefully and avoid accidents like this “American woman who drove in front of a bus for no apparent reason.”

I spent a few days in the hospital in Hermosillo with three broken ribs and a concussion. My sister had a knee injury, but she immediately found a bus headed north and hightailed it back to the USA.

The accident certainly could have been much, much worse. Fortunately, no one on the bus or on the street was injured. That would have made my pain unbearable. (Yes, even when I talk about other people being hurt, I can still make it all about me…).

So the point of my story this week is even when the worst thing you can imagine happens, because in my mind, being hit by a bus was right up there with worst things that could ever happen, eventually you find yourself on the other side.

It just takes a little time. So please, hang in there…